Founder and Owner of Salsa & Salsa

Rule the world with his army of Gru's mutated minions.

Kill Gru and Lucy (both failed).

Eduardo Perez, better known as the supervillain El Macho, is the main antagonist of Illumination's 4th feature film Despicable Me 2.

He is a former supervillain who kidnaps Felonious Gru's minions and turns them into feral killing machines so that they can help him conquer the world.

He was voiced by Benjamin Bratt, who also played El Topo in Snitch, Antonio Pope in Ride Along 2 and Ernesto de la Cruz in Coco.

Twenty years prior to the events of Despicable Me 2, El Macho was a supervillain who had a reputation for terrorizing Mexico. One day, El Macho allegedly faked his death (presumably to get his enemies off his back) by riding a live shark with 250 pounds of dynamite strapped to his chest into an active volcano. No one was ever able to retrieve his body.

In the present day, a highly powerful mutagen known as PX-41 is stolen (along with the secret laboratory where it is being developed) by a mysterious aircraft using a giant magnet. The Anti-Villain League recruits the former supervillain Felonious Gru (now a jelly manufacturer) to seek out the culprit along with undercover agent Lucy Wilde. They are assigned to infiltrate the Paradise Shopping Mall and find out who it is.

During their first day on the job, Gru and Lucy meet Eduardo Perez and he tells them about his upcoming Cinco de Mayo party. Just as he is leaving, Gru recognizes him as El Macho and decides to break into his restaurant with Lucy to see if they can find anything suspicious. That night, after breaking in, they are spotted by Eduardo's pet chicken El Pollito, who happens to be the restaurant security guard. After Lucy subdues the chicken, they break into the kitchen but find nothing. Eduardo soon returns and they barely manage to escape.

The next day, Eduardo meets up with Gru and his daughters at Salsa y Salsa. Eduardo notices that Margo has developed a crush on his son Antonio and invites the family to the big Cinco de Mayo party at his mansion. At the party, he notices that Gru is quite sad, as Lucy has been relocated to Australia. Eduardo sympathizes with him and tells him that he has also gone through some tough times, reasoning that "there's much more to us than meets the eye." After he leaves, Gru decides to follow him and see what he is really up to.

Gru eventually reaches a secret room hidden deep inside the house and runs into Eduardo dressed in his El Macho regalia, leading him to realize that El Macho truly is alive. El Macho announces that he is "making a spectacular return to evil" and brings in Gru's elderly assistant Dr. Nefario, who is now working for him. Dr. Nefario reveals that he has been kidnapping Gru's Minions and using the PX-41 mutation formula to turn them into an army of indestructible killing machines with purple fuzzy hair. El Macho proclaims that he will use the minions to conquer the world.

He offers Gru a chance to join forces with him, saying that he has admired his work as a villain for years. However, a disgusted Gru turns down the offer and leaves with his daughters. Antonio has also left Margo for another girl, so Gru freezes him with his freeze ray.

After they leave, Lucy arrives at the party because she has developed feelings for Gru. Upon entering, she is ambushed by El Pollito who gets a hold of her purse and shows it to El Macho, inadvertently revealing that they both work for the Anti-Villain League. As a result, he tracks Lucy down and holds her captive. After the party is over, Dr. Nefario changes his mind about working with El Macho and sides back with Gru.

At Gru's house, Dr. Nefario creates an antidote for the PX-41 formula and puts it into the jelly they were making earlier. They later return to El Macho's lair and restore all the Minions back to normal by firing the antidote at them with guns. Gru confronts El Macho on the top balcony and demands to know where Lucy is. He shows Lucy tied to an enormous rocket and tells Gru that he intends to send the rocket straight into the same volcano where he faked his death.

Just as El Macho is about to launch the rocket, one of Gru's minions steals the remote control. As a last resort, El Macho drinks an entire test tube of the PX-41 formula, turning him into a giant, purple hairy ogre-like monster. He later tries to kill Gru, but he quickly gains the upper hand and uses Lucy's lipstick taser (which she had given to him earlier) to subdue El Macho. Dr. Nefario then finishes El Macho off by shooting the fart gun at him knocking him unconscious.

Eduardo is a very short, heavyset Mexican man with long black hair that reaches his shoulders. According to Felonious Gru's flashbacks, twenty years ago, Eduardo was taller and more muscular than he is in the present day, and had longer black hair. In the present day, Eduardo only stands at 5'4, which is about Gru's shoulder height.

Despite being one of the greediest, most ruthless and most dangerous villains in his prime, after faking his own death and retiring from a life of crime El Macho has become a more friendlier, acquiescent, and good-natured personality. He remains a very sociable, gregarious, and interactive owner of Salsa y Salsa and has shown a degree of love for both his son Antonio and pet chicken, Pollito. Behind his complaisant and polite facade, El Macho is in possession of a deadly and destructive ambition and is more than willing to do whatever it takes to return to his lost fame.

However, underneath his confidence and calamity, El Macho also carried something of a sad and despondent side. Presumably having been forced to retire from his villainy, he had a very straightforward and genuine conversation with Gru claiming he knew the "look of the broken heart" and contemplated that he had once attempted to "drown his sorrows in guacamole".

He also has a degree of patriotism for his home country, Mexico. He reveals that he has a tattoo of the Mexican flag across his chest and while exploring his lair, it is decorated very Aztec-like. El Macho's dress style is also very reminiscent of that of a Mexican super wrestler. 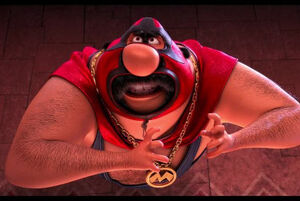 El Macho explaining his take over the world scheme to Gru with the Mutated Minions. 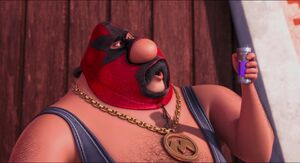 "We could've ruled the world together, Gru. But now... you're gonna die." El Macho rising his power to Gru. 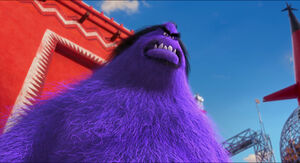 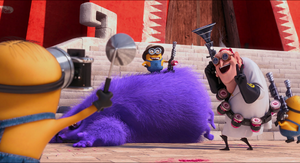 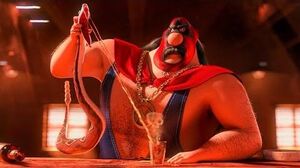 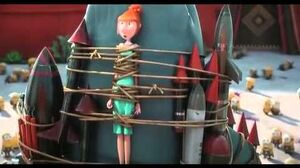 Despicable Me 2 Gru Vs. El Macho 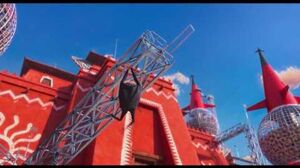