The House of the Scorpion

Vastly extend his lifespan by creating clones and harvesting their organs (mostly succeeded).

Kill Matt and harvest his heart (failed).
Become the ruler of Opium (succeeded).

Matteo Alacrán, mostly known as El Patrón, is the main antagonist in the 2002 dystopian novel The House of the Scorpion. He is the most powerful of the drug lords, and he is also the ruler of Opium. Matt (the main protagonist) is a clone of him.

El Patrón initially seems to be friendly and sympathetic despite being apparently dangerous. He spends a lot of time caring for and protecting Matt, and he seems to have a tragic backstory; he had seven siblings who all died at early ages. However, all of this turns out to be a facade to hide his true nature. In reality, El Patrón is greedy, ruthless, sociopathic, callous, and uncaring. He utterly lacks any remorse for any evil deeds that he commits, and he is a traitor who will do almost anything to ensure his own power and survival.

The House of the Scorpion

El Patrón was born in Mexico, and he grew up there. He had seven siblings, but he was the only who lived to grow up. He started to gain power, and he became responsible for the creation of the country Opium.

In order to extend his lifespan, El Patrón made clones of himself before murdering them and harvesting their organs. Afterwards, he made another clone named Matt, and he planned to do the same to him. Over the years, El Patrón kidnapped anyone who tried to cross the border in Opium, and he turned them into eejits, where they could only act upon their programming, while their thoughts and emotions were destroyed.

Fortunately for Matt, when El Patrón was about to have him killed, he suffered from a sudden heart attack, giving Matt the chance to escape. El Patrón died afterwards. Unfortunately, he arranged for the drinks at his funeral to be poisoned. This led to the death of his entire family and all of his servants. He believed that by doing this, his family and servants would continue to serve him in the afterlife. He also put the entire Opium on lockdown, leaving everyone there to starve.

The Lord of Opium

In the 2013 sequel (entitled The Lord of Opium), El Patrón does not make an appearance, but he is mentioned several times. 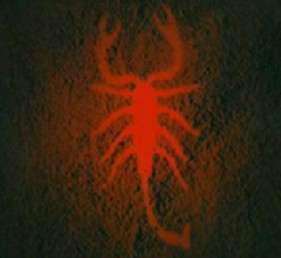 A symbol for El Patrón and the other Alacráns.
Add a photo to this gallery
Retrieved from "https://villains.fandom.com/wiki/El_Patr%C3%B3n?oldid=3557482"
Community content is available under CC-BY-SA unless otherwise noted.