Honghuo is a high-ranking member of the Chinese Mafia, also called an "Aniki" or "big brother" within the organization. Honghuo has subjected himself to cybernetic modifications that ended with 80% of his body becoming a machine housing a large amount of powerful weapons. As part of the mafia's terrorist strike on the city of Neo Hong Kong City, Honghuo leads an unit of vicious trained assassins into the older lower region of the city. Although reasons for the strike are uncertain, Hiryu wonders if the attack was coordinated from the shadows by Grandmaster Meio.

Hiryu faces the terrorists head on and slices through any opposition in the city streets, eventually reaching the end of the road where Honghuo stands. Despite the weaponry that makes up his body, Honghuo is neither fast nor strong enough to stand up to Hiryu and is defeated, his body breaking down and exploding.

Honghuo is a very large chinese man sporting a bald head and prominent belly, product of the mechanical modifications he has subjected himself to. He wears a long red tang suit with white cuffs that covers most of his body, red pants and shoes, as well as a pair of black glasses.

Honghuo's main distinguishing feature are the weapons that form part of his body: his right arm is a large, twin-edged bladed weapon and his left arm is a large gatling gun. Honghuo's prominent belly is actually a large, round black-metallic prosthetic housing a four-pod missile launcher.

Honghuo fights using the weapons that make up his two hands: he fights enemies up-close by swinging his axe-hand downwards and confronts enemies from afar by shooting constantly with the gatling gun he sports as a left hand, which he can aim both forward and upwards, as well as by unleashing four missiles from his belly.

Honghuo's critical weakness is his inability to move from his position while fighting. In cases he is attacked up-front, however, he has the ability to temporarily raise a defensive shield to protect himself. His body, while mechanical, is also not particularly durable and breaks down after sustaining enough damage.

When faced Honghuo is completely mute and is never seen speaking a single word, not even when attacking Hiryu or receiving damage. He's described as being the proudest member of the mafia and having the "heart of a follower", which appears to indicate he's deeply loyal to the organization. 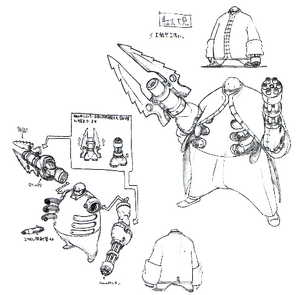