Elder Oracle of the Ancients

Vast godlike powers sustained through connection to the Wheel of Fate:

Wipe out immortal races along without any who oppose him so that he can feast on mortal souls for all eternity.

The Elder God is one of the main antagonists from the Legacy of Kain series. He is a giant squid-like creature, described as "A mass of tentacles and eyes", with godlike powers who feeds on the souls of the dead.

He was voiced by the late Tony Jay, who had also voiced Mortanius the Necromancer and the Hylden Lord in Blood Omen, and Zephon in Soul Reaver. Aside from these roles, Tony Jay was known for voicing a plethora of other villains such as Judge Claude Frollo in Disney's The Hunchback of Notre Dame, the Transcendent One in Planescape Torment, and Megabyte in Reboot.

The Elder God is an ancient Omnipresent and Nigh-Omniscient creature, who was worshipped by the Ancients, one of the races that inhabited Nosgoth. They praised his Wheel of Fate, his cycle of life and rebirth to which all souls return upon death, although it was just his justification for feeding on souls. The Hylden, another race of Nosgoth, refused to be submitted to the Wheel, so the Elder God incited the Ancients on waging war against them.

The Ancients banished the Hylden to the Demon Dimension, erecting the Pillars of Nosgoth to trap them there, but the Hylden took vengeance upon the Ancients by placing a curse upon them by turning them into vampires unable to reproduce, thirsting for human blood and worst of all suffering from immortality. Because of their inability to die, the Elder God silenced himself to the vampires, as their immortal souls couldn't return to the Wheel, thus not feeding him. From this moment on, he decided to wipe out the vampires, turning his eyes to the humans. Moebius, the powerful human guardian of the Pillar of Time, become his most faithful servant, serving his master by creating the Order of Sarafan priests to exterminate the vampires. The Sarafan did, in fact, succeed in wiping out most of the Ancients, with the exception of Janos Audron, who went on to birth the human vampires starting with the blacksmith Vorador. With Vorador's skills and with vampire magic Janos created the Soul Reaver, a sword capable of defeating the Elder God, to which the god was unaware of.

Centuries after the corruption of the Pillars, the now ruler of Nosgoth Kain throws his lieutenant Raziel into the abyss. When the remnants of Raziel's body reach the bottom of the abyss and awakes, the Elder God greets him, claiming that he resurrected him to be his devourer of souls. He incites Raziel on taking revenge on Kain, so that the vampires (who now rule the land) are destroyed by him, so his Wheel of fate can turn again. Raziel kills his brothers and makes his way to Kain, who was in the Chronoplast of Time waiting for him. They have a brief discussion, but Kain flees into a portal on the chamber. Raziel follows him into the portal.

Arriving 530 years before Kain took his decision at the pillars, Raziel is greeted by Moebius, who tries to manipulate Raziel into killing Kain. After Raziel have a discussion with Kain at the Pillars, he finds the Elder God in a subterranean chamber down the Pillars. He was waiting for Raziel, but Raziel wasn't so happy with this meeting. Raziel starts distrusting the Elder, as he wanted to find his destiny by himself.

The Elder God left Raziel trapped for 500 years, to the point of starvation, until Raziel finally decided to submit to his will. But the Elder wanted to test Raziel's loyalty; Raziel takes this chance to escape his grasp. 500 years before, as Kain enters a sealed chamber in the Vampire Citadel, the Elder talks to Kain, addressing himself as the oracle of his ancestors. Knowing that Kain wanted to find Raziel, he shows Kain an image of Raziel in the future, as he was trying to find the Heart of Darkness to resurrect Janos Audron.

The Elder God then creates a time portal for Kain, so that he can reach Raziel five centuries ahead, but his plan was that Raziel killed Kain there. Raziel, under the authoritative influence of the Hylden after killing his brother Turel, fights Kain and takes his heart out, as it was the Heart of Darkness itself. Raziel resurrects Janos, who leads him to the Spirit Forge, where he would find the answers he sought. The Elder talks to Raziel, showing how he was pleased that Raziel had killed Kain. He tried to impede Raziel on activating the forge, but is unsuccessful. The forge summons all Balance Guardians, which included Kain, who was still alive.

Raziel fights Janos, who was possessed by the Hylden Lord, but his body is destroyed and he returns to the spectral realm. The Elder is satisfied with Raziel, saying that he now will spend the rest of eternity with him. He summons Moebius, who he recently resurrected, to the place, but Kain arrives and kills him. In the spectral realm, Raziel purifies Moebius's soul and devours it, after Moebius sees to his horror that the god he worshipped and had served for millenia was an outrageous abomination. Raziel uses Moebius's corpse to reappear in the material realm, but Kain instinctively strikes him with the Reaver.

However, Raziel stops Kain from withdrawing, because he needed to see the "True Enemy". Raziel purifies Kain, as his soul is sucked into the Reaver, which then becomes the Soul Reaver. For the first time, Kain is able to see the Elder God. Kain fights him and is successful in harming him, but the Elder God starts a tumultuous frenzy, knocking the entire place in an attempt to bury Kain under the rubble, but Kain manages to escape.

The Elder God is bound to the Wheel of Fate: It is an inexorable cycle of birth, death, and reincarnation to which all living creatures in Nosgoth are compelled. Because of it, as it consumes souls, it grows in mass & size and becomes more powerful.

The powers of Elder God are mostly unknown. the Elder God is together with Kain as the Scion of Balance, the most powerful character in all the series. He is a non-corporeal and multi-dimensional being, existing in both the material and the spectral plane and is able to act and attack in both simultaneously, he can only be seen and touched by purified beings and only can be damaged by the purified Soul Reaver (a sword that also exist in the material and spectral plane simultaneously). Basically, it is an invulnerable, intangible and invisible creature. Even with the Soul Reaver, it has immense durability, according to developers, Kain as the Scion of Balance can damage it because it "balances the entire World/Universe". He is able to interact with other creatures even if they can't see it or touch it. Although his size varies depending on the time, he is omnipresent and timeless, no matter what year, reality or timeline it may be, he always exist in world of Nosgoth, it is a being that detects time differently since in the spectral plane, time does not advance. It is extremely intelligent, being able to manipulate several races and very intelligent beings like Moebius for thousands of years, that added to being able to see the past, present and future simultaneously makes it almost omniscient. The Elder God is able to project energy through his eyes, these shots are so fast that they are able to reach Kain, can create different types of energy fields. He is tied to his "agents", he can see what they see and every time one of them consumes a soul, it goes to the Elder God and he absorbs them. He is able to regenerate limbs (tentacles), can communicate telepathically with people even in other dimensions, the Elder God has "Power over Life and Death" and is able to resurrect beings and creatures, at any time it wishes to do so. He is capable of manipulating the dimensional portals of the spectral realm to the material plane and he also showed the ability to create time portals to any date and time that he desires.

According to developers: "We've only just scratched the surface of things he could do".

Although its size varies it has been said that he is more pervasive than a continent, has an extreme physical strength, his tentacles are capable of destroying walls, floors, ceilings and buildings without much of a problem, move big structures (like the Spirit Forge) easily and he is also able to drill an entire continent with them. 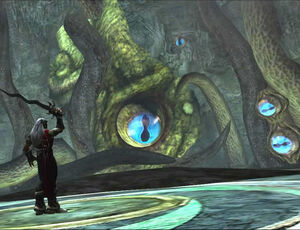 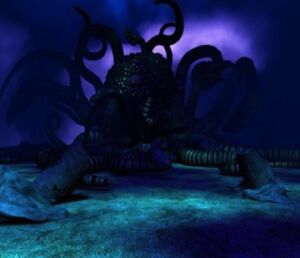 A concept art of the Ancient God (the Elder God) in Soul Reaver 2.
Add a photo to this gallery 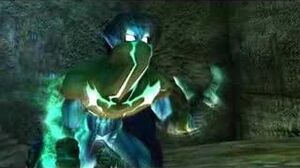 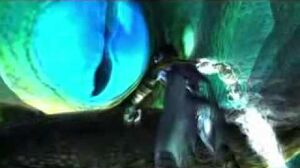 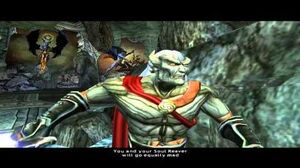 Retrieved from "https://villains.fandom.com/wiki/Elder_God?oldid=4154566"
Community content is available under CC-BY-SA unless otherwise noted.