Raziel fights Janos, who was possessed by the Hylden Lord, but his body is destroyed and he returns to the spectral realm. The Elder is satisfied with Raziel, saying that he now will spend the rest of eternity with him. He summons Moebius, who he recently resurrected, to the place, but Kain arrives and kills him. In the spectral realm, Raziel purifies Moebius's soul and devours it, after Moebius sees to his horror that the god he worshiped was just a giant squid. Raziel uses Moebius's corpse to reappear in the material realm, but Kain instinctively strikes him with the Reaver. 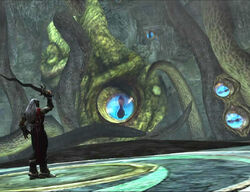 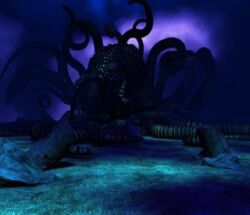 A concept art of the Ancient God (the Elder God) in Soul Reaver 2.
Add a photo to this gallery
Retrieved from "https://villains.fandom.com/wiki/Elder_God?oldid=2403084"
Community content is available under CC-BY-SA unless otherwise noted.