Elder Ones
The Crinoid Things of Antarctica

At The Mountains of Madness

City of the Elder Things

Can see without light

The Elder Things are an alien species in the Cthulhu Mythos, appearing in H.P. Lovecraft's stories At The Mountains of Madness and The Dreams in the Witch-House, as well as being mentioned in various other stories.

The Elder Things came to Earth from a triple star system between Hydra and Argo Navis, and built cities both on Earth and underwater. A scientist race, they created the first life forms on Earth, including possibly the entity Ubbo-Sathla (although some sources claim it to have been an Outer God), and warred against the Great Race of Yith, the star-spawn of Cthulhu and the Mi-go. They also may have worshipped Nyarlathotep, as they apparently awed the Shining Trapezohedron and placed it in a box of alien construction.

However, the downfall of the Elder Things came when they created the shoggoths as a slave-race. Although initially docile, the shoggoths soon rebelled, and this, combined with the gradual end of the Ice Age, forced the Elder Things to retreat into their underwater cities. Over time, the warming of the Earth killed off all of the terran Elder Things, with the exception of eight inhabiting the last surface city, located in Antarctica, who were fossilized when the city collapsed.

Aeons later, an Antarctic expedition from Miskatonic University unearthed the eight remaining Elder Things. Four were dissected by the expedition, but the other four awoke and easily subdued the humans, before performing their own experiments on them, savagely killing all those in the camp in their own attempts at dissection. The camp's dog-handler, Felix Gedney, was taken by the Elder Things along with the dogs and much of the expedition's equipment. Gedney and the dogs were later dissected in the city.

Danforth and William Dyer, two humans who weren't in the camp at the time, found the city while searching for Gedney. They came across the stolen items and the remains of Gedney and the dogs before fleeing when they came across a shoggoth. Before they fled they found the corpses of several Elder Things, but it's unknown whether they were the same ones or had been there since the city's fall.

Long after their decline on Earth, Nyarlathotep and his disciple Keziah Mason visited the homeworld of the Elder Things with Walter Gilman while attempting to ensnare him into the court of Azathoth. 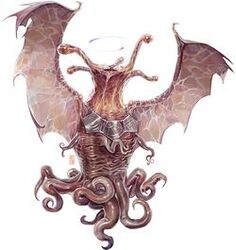 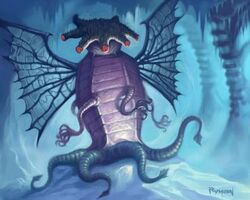 Retrieved from "https://villains.fandom.com/wiki/Elder_Things?oldid=4159513"
Community content is available under CC-BY-SA unless otherwise noted.