The Eldrazi are a race of alien devourers and major antagonists in the Magic: the Gathering Card Game. Existing for nearly as long as the Multiverse itself, the Eldrazi have traveled throughout the Multiverse, going to planes and consuming their mana. This has resulted in the destruction of numerous planes and an untold number of deaths. Once one of the main titans Eldrazi find a plane with a sufficient amount of mana, they form avatars to enter that plane. Then, they spawn drones and processors to absorb the mana from the inhabitants of said plane and the plane itself. Once completed, the Titan leaves and the plane is left as a husk. They are necessary to sustain the ecosystem of the Multiverse. The Eldrazi have posed as threat to numerous Planeswalkers, but few were strong enough to face them.

Ulamog is considered the weakest of the Eldrazi Titans. He is the titan with an appearance most similar to a human. His head looks like a bony helmet and his body looks like a giant muscle with tentacles and two sets of big arms. He is referred to as the "Infinite Gyre" or the "Ceaseless Hunger". This is due to the fact that Ulamog consumes all types of matter while the other titans do not. Whenever Ulamog absorbs the mana on a plane, he leaves behind a chalk-like residue behind. His brood ranges in size from the spawn being the size of a wolf to hundreds of feet tall. In appearance, Ulamog's spawn look like spiders or crabs with tentacles, while his larger spawn look like slightly smaller versions of himself. Ulamog can also turn those who wish to serve him into thralls, mindless husks that obey Ulamog's commands.

Kozilek has power greater than Ulamog's, but weaker than Emrakul's. He is the titan with an appearance somewhat similar to humans, but with many differences. His head looks like an orb and his body looks like a sturdy carapace with tentacles and two big arms. He is referred to as the "Butcher of Truth" or the "Great Distortion". This is due to the fact that Kozilek warps the landscapes of the worlds he visits as well as the minds of those he encounters while the other titans do not. Whenever Kozilek absorbs the mana on a plane, he leaves behind rectangular shaped patterns behind on the Plane. His brood ranges in size from the spawn being the size of humans to hundreds of feet tall. In appearance, Kozileks's spawn look like humanoids with tentacles and floating parts above their bodies, while his larger spawn look like varied different creatures with floating parts above their bodies. Kozilek can shatter or control the minds of beings who try to challenge him. He also has control over time, space, and reality, as evidenced when he made the human leader Tazri experience millions of years in an alternate timeline in which he'd absorbed all of Zendikar into himself.

Emrakul is considered the strongest of the Eldrazi Titans. She is the titan with an appearance most similar to a squid or an octopus. She looks like a giant floating octopus with similar tentacles or hands, a sinew laced body, a cover shaped top, and a giant eye in her center. She is referred to as the "Aeons Torn" or the "Promised End". This is due to the fact that unlike the other titans, Emrakul corrupts the minds and bodies of the residents of a plane rather than a plane's landscape. Emrakul doesn't leave a physical imprint on the planes she visits, but the inhabitants slowly become corrupted, first losing their sanity - attempting to 'purify' the world through wanton violence and destruction, or seeking to merge themselves and all other life with Emrakul, or simply become feral and attempting to consume everything around them - and then undergoing rapid mutations into Eldrazi hybrids. At least inititally, she had the smallest brood size when compared to Ulamog and Kozilek, though the size of Emrakul's brood is determined by the amount of the creatures she corrupts and thus continually increases over time.

For most of their lives, the Eldrazi roamed the Multiverse unopposed. Once their existence was made known to three Planeswalkers(Sorin, Nahiri, and Ugin), the trio knew that they had to be stopped. Ugin wanting to contain them for his studies suggested to bind them to a plane to stop their rampage. It was chosen that the plane of Zendikar as a prison for the Eldrazi. By increasing the plane's mana, Ulamog, Kozilek and Emrakul were drawn to the amount of energy Zendikar emitted and arrived on the plane. Little did the titans know that this was a trap. Using the plane's hedrons which had binding properties, the Eldrazi were trapped in a planar prison, unable to escape. The trio of Planeswalkers went there separate ways with Nahiri serving as a warden for the Eldrazi. During their imprisonment, most of Zendikar's residents were unaware of the titans' existence, but knew the power they had. Their presence on the plane made the world recoil in pain (Since Zendikar is partially sentient). Their strength was so well known that many of Zendikar's inhabitants believed the Titans were Gods. The merfolk of the plane worshiped them as Ula, Cosi, and Emeria believing them to be largely benevolent beings rather than incomprehensible destroyers.

The Dragon Planeswalker Nicol Bolas knew the power that the Eldrazi held and planned to free them from the hedron prison. By learning how to break the hedron alignment and manipulating the actions of three other Planeswalkers(Jace Beleren, Chandra Nalaar, and Sarkhan Vol), the first barriers of hedrons were broken. Some of the spawn would be able to leave, but Ulamog, Kozilek, and Emrakul were still trapped. Shortly after, another Planeswalker named Nissa Reveane found Sorin and the two managed to hold off the brood. Thinking that the Eldrazi would leave if they were freed, Nissa destroyed the hedron network and let the Eldrazi escape. Emrakul left Zendikar to the Blind Eternities, Kozilek buried himself into Zendikar's crust, and Ulamog began to ravage Zendikar's surface, leaving dust in his wake.

For Many years, Ulamog was busy turning Zendikar into a chalk-like mess. Wanting to stop Ulamog, a Planewalker named Gideon Jura came to Zendikar hoping to stop the Eldrazi threat. After getting one look at Emrakul, he immediately retreated and left Zendikar to find help. Now, with a few additional Planeswalkers and some powerful Zendikar natives, Gideon was ready to deal with Ulamog. A planeswalker named Kiora came to Zendikar with a legion of sea monsters as well as using Zendikar's dangerous marine life to try to kill Ulamog. They put up a good fight, but Ulamog decimated them all. Gideon set his plan into motion, which was to create another hedron network to once again imprison Ulamog, which worked. With the major threat once again contained, the planeswalkers bickered about what to do with Ulamog. This didn't last long because a demon Planeswalker Ob Nixilis absorbed the energy from the hedrons, freeing Ulamog and reigniting his spark. To make things worse, Ob Nixilis awakened Kozilek from the ground and the two titans continued their rampage across the plane. After defeating Ob Nixilis, Gideon, Jace, Chandra, and Nissa combined their powers to pull Ulamog and Kozilek's true forms into the plane. Having the Eldrazi pinned, the group of Planeswalkers (now known as the Gatewatch) used their powers to end the physical manifestations of Ulamog and Kozilek on Zendikar. However, it is unknown if Eldrazi Titans can ever truly be removed from existence, as they are fundamental forces of the Multiverse and essential to its inner workings.

After years of scheming, Nahiri was ready to have her revenge on Sorin for abandoning Zendikar. Using beacons of mana called cryptoliths, she managed to call Emrakul to the plane of Innistrad. The plane's protector, the archangel Avacyn, was driven insane as a result of Emrakul's presence interfering with the mana flow of the plane. Avacyn sought to purify the plane by eradicating all life she deemed impure, leading her corrupted angels to slaughter humans en masse. As a result, Avacyn's creator Sorin was forced to destroy her, but this also destroyed the barrier protecting the plane from Multiversal threats, allowing Emrakul to physically manifest.

Emrakul's presence warped many of Innistrad's residents - human and inhuman alike - into eldrazi hybrids. These monstrous abominations raged across the plane, but met opposition from the plane's humans, vampires, werewolves, and zombies. Shortly after, the Gatewatch (now accompanied by two new Planeswalkers named Liliana Vess and Tamiyo) arrived to defeat Emrakul. In a matter of moments, Emrakul knocked out every member except for Liliana. She tried to use death magic to harm Emrakul, but Emrakul healed faster than the death magic could hurt her. After Jace peered into everyone's minds (including Emrakul's) everyone was woken up and a new idea was established. With their combined powers, the Gatewatch managed to imprison Emrakul inside Innistrad's moon. It was soon revealed that this was what Emrakul wanted. Her reasoning for this is still unknown.

When an avatar of Emrakul (taking the form of the merfolk goddess Emeria) appeared to the telepath Jace Beleren, she gave some insight as to the purpose of the Eldrazi in the Multiverse. She claimed that the Eldrazi are necessary to stave off entropy and preserve existence itself. It's implied that the Eldrazi 'recycle' old and dying planes, with Ulamog first consuming all of the plane's matter and energy, Kozilek reshaping the plane and resetting its physical laws, and Emrakul seeding the plane with new forms of life.

If this is true, then the Eldrazi would normally only be drawn to worlds that are already on the verge of destruction, and it was only because of the intervention of Planeswalkers that they were effectively tricked into attacking healthy planes like Zendikar and Innistrad. (The hedrons on Zendikar and cryptoliths on Innistrad both projected mana from the plane out into the Blind Eternities, which could emulate the mana of a dying plane leaking out into the void as it dissipates.) While the Eldrazi are not sapient in any conventional sense, it would appear that Emrakul was able to sense that something wasn't right: she claimed to feel "incomplete" and detected "resentment" from the life on Innistrad, likely because she was trying to create life on a world that already had life on it and hadn't been cleared for her use by Ulamog and Kozilek. This may explain why she decided to use the Gatewatch to imprison herself in Innistrad's moon, presumably until the time was right for her to fulfill her purpose again.

This would also make Emrakul the progenitor of all life in the multiverse, making her the closest thing the Magic: The Gathering cosmology has to a true supreme being. After his encounter with Emrakul's avatar, Jace seems to believe this is the case, as he says that everyone and everything ultimately belongs to Emrakul in the end. 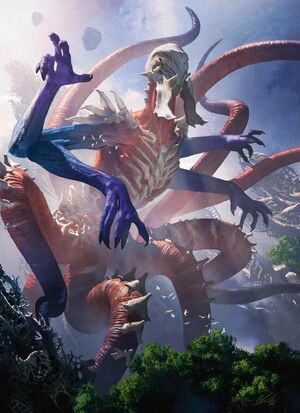 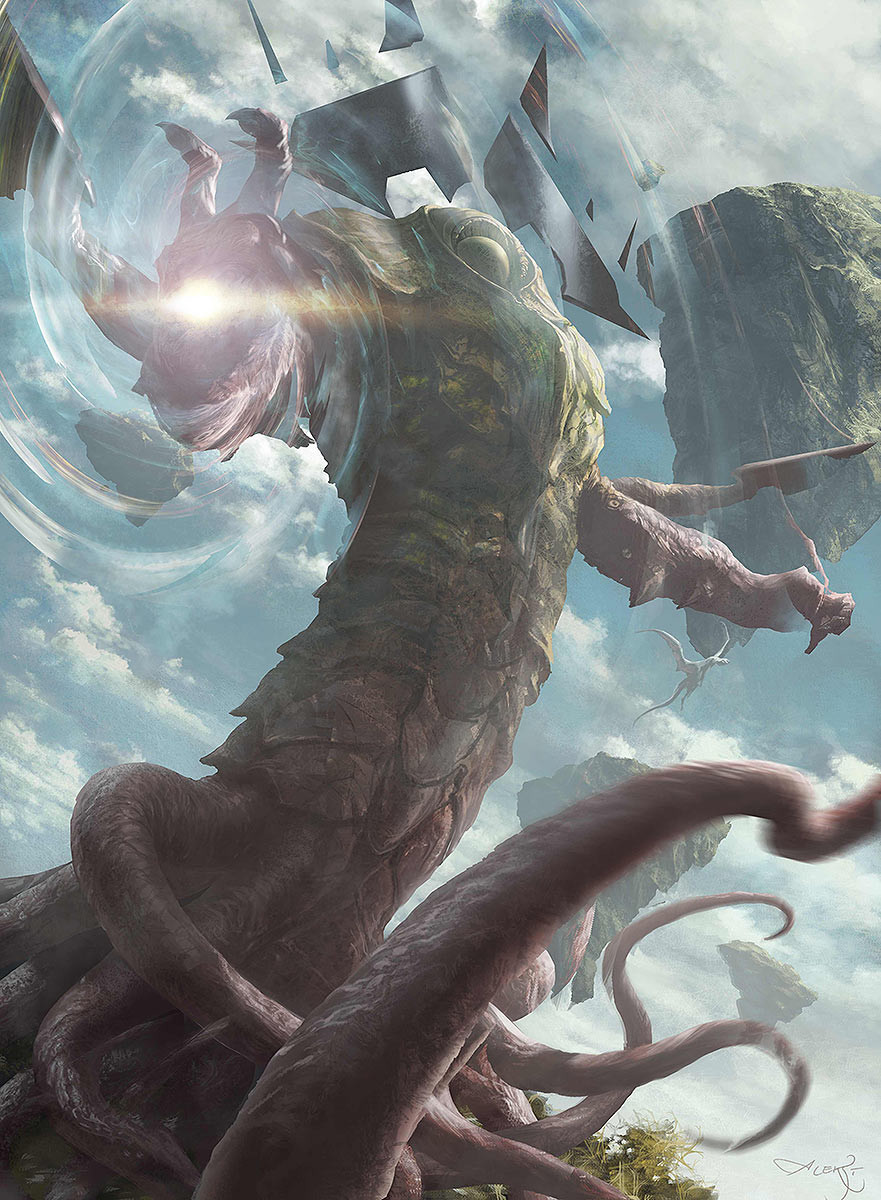 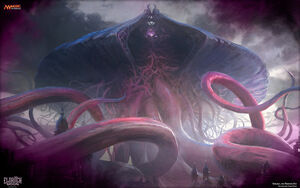 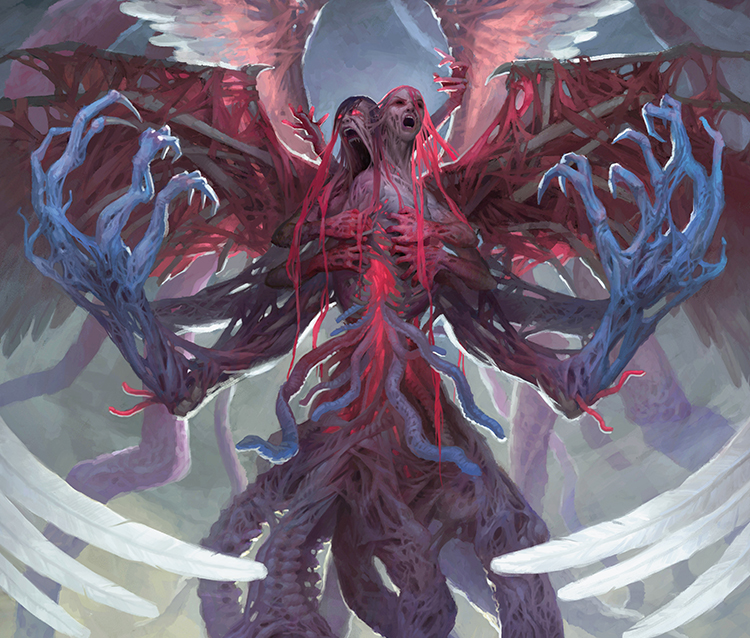 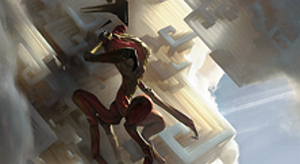 Inverter of Truth is one of Kozilek's brood 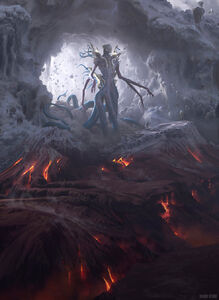 Void Winnower is one of Ulamog's brood 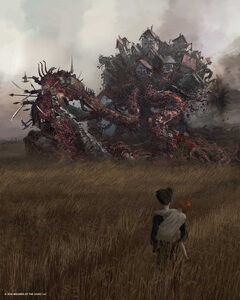 Emrakul corrupted the town of Hanwier into an Eldrazi 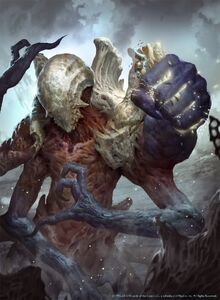 One of Ulamog's spawn draining the mana from an angel 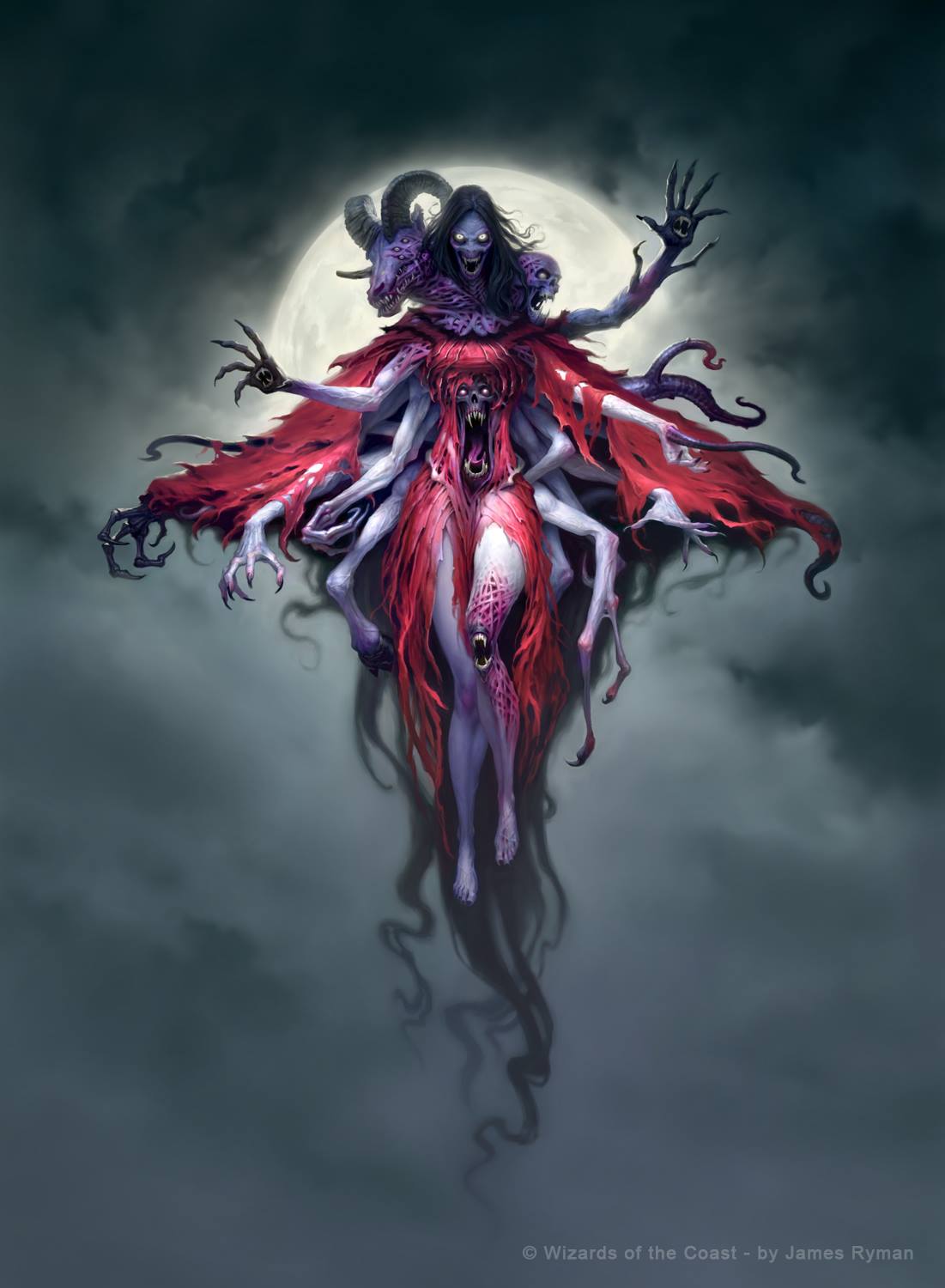 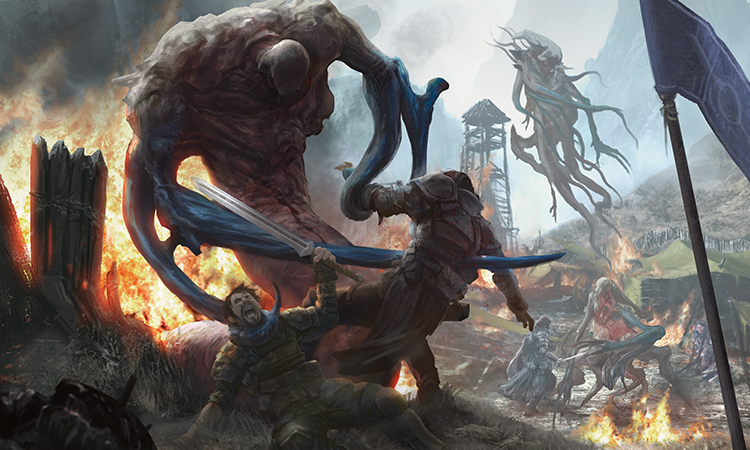 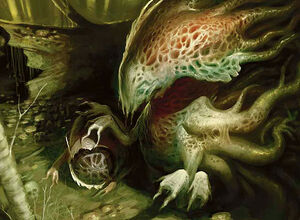 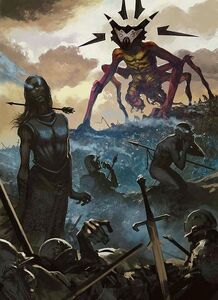 One of Kozilek's brood can reanimate and control the dead
Add a photo to this gallery
Retrieved from "https://villains.fandom.com/wiki/Eldrazi?oldid=3563462"
Community content is available under CC-BY-SA unless otherwise noted.