Eleanor is a member of a fanatical cult known as the Brethren and a minor antagonist in the Silent Hill film. She is the mother of Anna and she follows the preachings of Christabella.

She was portrayed by Nicky Guadagni.

Eleanor attends the ritual burning of a child named Alessa Gillespie in November 1974, and later escapes the fire started when the ritual goes awry. When Alessa's rage grows out of control and she splits her soul, Eleanor is one of the people dragged into the Otherworld to pay for her crime against the child. It is implied that Eleanor may have given birth to her daughter, Anna, in the alternate dimensions. Thirty years later, in 2004, Eleanor is still alive in the Fog World.

When Rose Da Silva and Cybil Bennett enter the church after Anna's death, Eleanor is the closest to them. She becomes upset, and declares that Rose and Cybil are witches. She then leads the other cult members to attack the two women, only falling back after Cybil discharges her gun into the ceiling.

Eleanor then runs to Christabella and tells her that Rose and Cybil were responsible for her daughter's death at the hands of the monster Pyramid Head. Christabella reminds her that Anna had broken the laws of the cult, and was not the responsibility of the two strangers. She then comforts Eleanor and leads her to the center of the church to pray for an end to the Darkness.

Eleanor, along with all the other church members, is killed by Alessa when a portal into the Dark World is opened inside the church. Her death is never shown, but it is safe to assume that she was torn apart by Alessa's barbed wire in the same fashion as the other cultists. 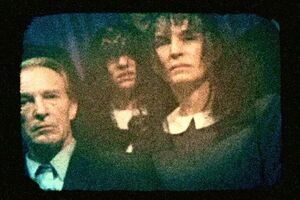 A younger Eleanor seen among the members of the Brethren in the flashbacks of Alessa Gilliespie's tragic past.