Electric Boogalooo, or simply known as Boogaloo, is one of the secondary antagonists of the mobile game Plants vs. Zombies Heroes. He is a Zombie Hero of Disco Zombie, who leads Beastly and Crazy classes.

Electric Boogaloo was originally a Disco Zombie, who later got infected with the ray from the Hero-Tron 1000 while attacking the plants.

In Dance-off at the Disco, Electric Boogaloo can be seen as zapping Crazy Dave due to the fact he refused to let him and his backup dancers in the stage. Seeing this, Green Shadow, Solar Flare, Spudow, and Grass Knuckles had a dance-off against him. During the dance-off, Solar Flare used her DJ skills to help the other Plant Heroes defeat him.

Electric Boogaloo appeared in The Great Cave Raid alongside Super Brainz and Rusbolt to find a new lair in a cave, until Spudow popped up and suddenly attacked them. They had a fight until Super Brainz used a rope to tie Spudow's head from firing explosive buds.

Electric Boogaloo returned in When Fungi Attack to invade Nightcap's secret dojo hut alongside Super Brainz and Professor Brainstorm. After seeing them entering the hut, Nightcap attacked them with his mushroom team. They had a fight until Professor Brainstorm used his zapper to defeat him.

Electric Boogaloo can manipulate electricity, as he can blast bolts on enemies and heal himself from damages, as stated in Stayin' Alive. 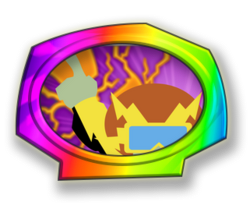 Stayin' Alive
Add a photo to this gallery

Retrieved from "https://villains.fandom.com/wiki/Electric_Boogaloo?oldid=4145340"
Community content is available under CC-BY-SA unless otherwise noted.