Electric Fan is a boss from Darius, which appears again in Darius Gaiden. One of the Belser flagships, Electric Fan is a ground battleship, specialized in anti-aerial combat. It is shaped after a sea anemone.

Electric Fan can shoot from it's arms (which can be destroyed) and send homing drones, though most of it's firepower is centered on it's mouth, which is also it's weak spot. It can fire lasers and shoot bullets upwards that rain down in the area, as well as use a powerful vacuum that sucks down any nearby aircraft. Though Electric Fan is a ground battleship, it is equipped with rocket boosters that allow it to hover and pursue it's targets. 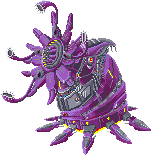 Electric Fan in Darius (Zone B) 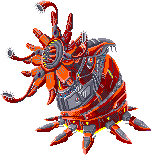 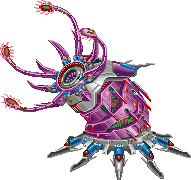 Electric Fan in Darius Gaiden
Add a photo to this gallery
Retrieved from "https://villains.fandom.com/wiki/Electric_Fan?oldid=2836858"
Community content is available under CC-BY-SA unless otherwise noted.