Electric Slide is one of the secondary antagonists of the 2019 third player shooter game Plants vs. Zombies: Battle for Neighborville. She is a disco zombie skater who takes part in fighting the plants. She is part of the Attack class.

Electric Slide is a zombie skater who has a ginger afro with a blue headband under it. She wears a cracked purple visor, with two electric bolt on the sides. Her lips are a darker color than the rest of her skin, which reveal tell that she uses makeup. She wears a pink outfit, with a purple jacket alongside yellow electro bolts, and a large grey bolt on her back. She also wears handcuffs that help her fire her Boogie Bolt. To help her move faster, she wears a pair of rocket powered roller skates that match her outfit color. Also, the left roller skate has a hole that shows her toes.

Electric Slides appeared in the comics alongside 80s Action Heroes and Space Cadets to fight plant resistances who were trying to rescue trapped plants. 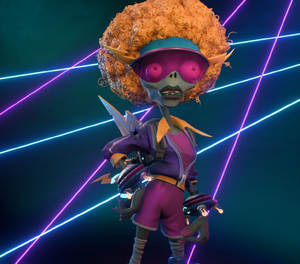 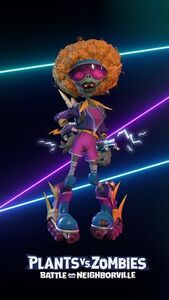 Background for mobile.
Add a photo to this gallery

Retrieved from "https://villains.fandom.com/wiki/Electric_Slide?oldid=4142660"
Community content is available under CC-BY-SA unless otherwise noted.