This page is about the incarnation of Electro from the 2014 movie. The mainstream version can be found here: Electro (Marvel).

Attempting to kill Spider-Man.
Gloating about his vast powers.

Obtain full control over the OSCORP Power Grid in order to be able to get revenge on the entire world (all failed).

Maxwell "Max" Dillon, also known as Electro, is one of the two main antagonists (alongside the Green Goblin) of the 2014 superhero drama film The Amazing Spider-Man 2.

He is a former electrical engineer at Oscorp who had idolized Spider-Man, but was transformed into an extremely powerful living electric capacitor after a freak accident, growing power-hungry and obsessed with defeating and killing his former idol.

He was portrayed by Jamie Foxx, who also played Bats in Baby Driver and will also play another incarnation of the Electro character in the Marvel Cinematic Universe.

Max Dillon lived his whole life without anybody merely acknowledging his existence. One time, the Manhattan hero Spider-Man bumps into him on the streets and tells him, "You're my guy. You're my ears and eyes on the street". Being the "nobody" that Dillon was, he was thrilled to have been acknowledged by somebody, let alone the very famous Spider-Man.

As Spider-Man leaves, Dillon starts to believe that he is an accomplice to the hero. He goes mad with "love" for Spider-Man, constantly thinking about him and the fact that he could help him in any way. After his mother forgets his birthday, Max is placing a large electrical wire into a vent at Oscorp when he is suddenly electrocuted. He falls, dragging the wire with him, into a tank full of genetically altered electric eels. They sting him multiple times and the tank shatters. The mix of chemicals causes Max to become a living electrical generator, surging his body with electricity, turning his skin translucent blue and giving him the power to manipulate electricity.

After being inadvertently humiliated in Times Square by Spider-Man, Max begins feeling that he is betrayed by love, his family and his job. He wants to rid the world of power so that everyone can feel what he once felt. Electro also feels betrayed by Spider-Man and fights him with his powerful electrical abilities. When Harry Osborn is removed as CEO of Oscorp and was framed for being involved in Dillon's accident, he breaks out Electro from Ravencroft and allies with him to overthrow Donald Menken from the board, in exchange for giving him access to Oscorp's power grid, which he designed.

Electro causes a citywide blackout, challenging Spider-Man. However, with the help of Gwen Stacy, Spider-Man defeats Electro at the power plant by overloading his electricity supply by reflecting his power back to him, causing him to violently explode into millions of particles.

As well as appearing in an upcoming 2014 Lego Marvel set as a mini-figure, Electro is also in the 2013 video game Lego Marvel Superheroes as a playable character and a boss.

At the beginning, Max was an awkward and lonely man who longed to be acknowledged and appreciated by people. He is constantly pushed around by those around him, with his superiors stealing his plans for the new power grid, leaving him to constantly feel powerless. These experiences led to Max repressing a great deal of anger, one instance in which he imagines violently berating his boss for not believing that the power grid’s designs were his and jokingly claiming to be Spider-Man. After Spider-Man saves Max’s life, along with giving him a pep talk to boost his confidence, Max, finally feeling as though someone acknowledges him, begins to idolize him to an almost obsessive level having a shrine dedicated to him in his room.

After his transformation into Electro, Max was initially scared and confused, not understanding what was happening to him. Once entering the city, he is mesmerized with the sight of his face broadcasted all over city, believing that now people finally “see” him. This is short lived as Spider-Man unintentionally steals the spotlight, resulting in all the resentment and rage inside Max to boil over as he attacks his former idol who he felt betrayed him. At this point, Max has fully accepted his transformation into Electro, and is no longer the meek man he once was, now boasting a much more cocky and arrogant attitude. He vows to get back at the world who took so much from him, and to show them what life will be like with only him and no Spider-Man. 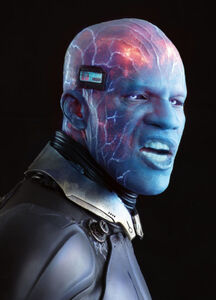 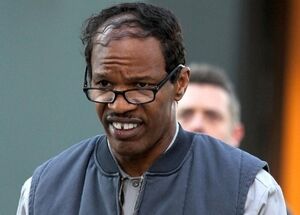 Electro firing beams of electricity from his hands. 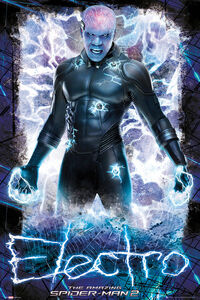 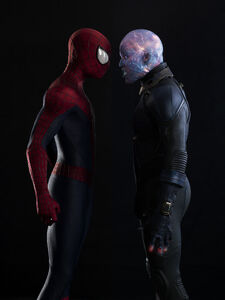 Promotional image of Spider-Man and Electro.
Add a photo to this gallery 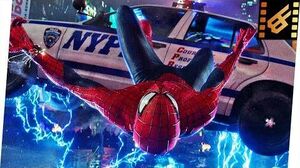 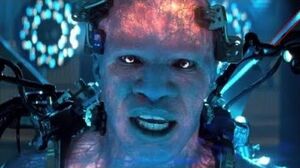 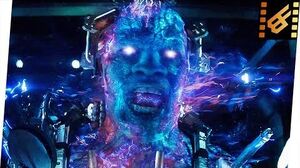 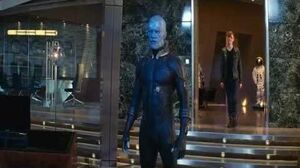 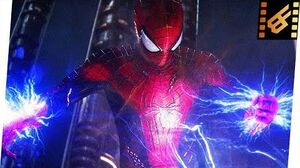 Retrieved from "https://villains.fandom.com/wiki/Electro_(The_Amazing_Spider-Man)?oldid=4329118"
Community content is available under CC-BY-SA unless otherwise noted.