Electrokinesis; he becomes superhumanly strong and fast when his body is charged to high levels

Make the world feel the same way he felt when he lost his family, job and his wife

Maxwell "Max" Dillon a.k.a Electro is the main antagonist in the upcoming 2014 film The Amazing Spider-Man 2.

He is portrayed by Jamie Foxx.

Max Dillon lived his whole life without anybody merely acknowledging his existence. One time, the Manhattan hero Spider-Man bumps into him on the streets and tells him, "You're my guy. You're my ears and eyes on the street." Being the "nobody" that Dillon was, he was thrilled to have been acknowledged by somebody, let alone the very famous Spider-Man.

As Spider-Man leaves, Dillon starts to believe that he is an accomplice to the hero. He goes mad with "love" for Spider-Man, constantly thinking about him and the fact that he could help him in any way.

After his mother forgets his birthday, Max is placing a large electrical wire into a vent at Oscorp when he is suddenly electrocuted. He falls, dragging the wire with him, into a tank full of genetically altered electric eels. They sting him multiple times and the tank shatters. The mix of chemicals causes Max's skin to turn blue and give him the power to control electricity.

Max feels that he is betrayed by love, his family and his job. He wants to rid the world of power so that everyone can feel what he once felt. 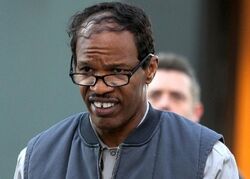 Retrieved from "https://villains.fandom.com/wiki/Electro_(The_Amazing_Spider-Man)?oldid=655356"
Community content is available under CC-BY-SA unless otherwise noted.