Cut off the power to the security guard's office so the others can kill him (failed).

Electrobab is a minor antagonist in the 2016 indie horror game Five Nights at Freddy's: Sister Location. It is a variation on the Bidybab that can absorb electricity from the generators, draining power to the office and leaving the night guard open to attack.

Electrobab's existence remains a mystery, as it is not seen in the rest of the game outside of the Custom Night. It is assumed that it may be an old or modified version of the Bidybab that is simply lying around in the building.

Electrobab will appear at random intervals during the night in either the west or east closets. It will then begin flashing its eyes, draining power from the generator it is next to, draining power to the office. if the power runs out, the guard will be open to attack.

The only way to stop Electrobab is to administer a controlled shock to it, which will temporarily deactivate it.

Electrobab looks the exact same as the Bidybab: a pale, nude baby animatronic with yellow eyes, an orange nose, square teeth, a red bottom lip, and a single silver button on its chest. When draining power, its eyes flash sporadically. 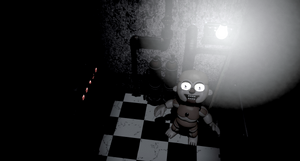 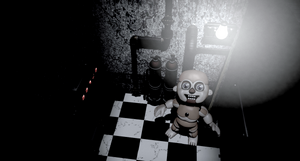 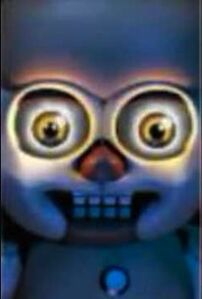 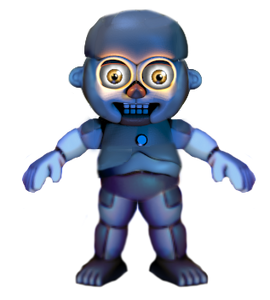