Villains Wiki
Register
Don't have an account?
Sign In
Advertisement
in: Male, Doctors and Scientists, Criminals,
and 25 more

Acting (as activity in prison)

Get revenge on Salvatore Maroni (failed)

Jack Buchinsky, dubbed "Electrocutioner" by the media, is a minor antagonist in the 2015 series Gotham. He is a murderer and bank robber with a love for electricity. After being betrayed by his former comrades, he let himself being imprisoned in Arkham Asylum under a false identity, where he experimented on the inmates.

He appeared in the episodes Rogues' Gallery and What The Little Bird Told Him.

He was portrayed by Christopher Heyerdahl who plays Zor-El in Smallville and Alastair in Supernatural.

Buchinsky was a former bank robber for the mafia. After robbing four banks and thereby killing 6 people, he was betrayed by his boss, Don Salvatore Maroni, arrested by the GCPD and sentenced for life. While imprisoned, he heard about Arkham Aslyum's reopening so he used his connections to get sent to Arkham Asylum under the name Jack Gruber. He started experimenting on inmates by the means of electro-convulsive therapy, trying to break their minds. The results varied, some inmates like Aaron Danzig and Dorothy Duncan were a success and could be used as henchmen, but other experiments failed and left the inmate brain-dead.

He is first seen reenacting a Shakespeare play alongside other inmates. During the play, an inmate storms the stage and during the chaos that erupts, someone steals the keys of the Asylum from a guard. A day later, Gordon finds a brain-dead inmate in his cell, who was experimented on with electro-convulsive therapy. When the same happens to another inmate, Gordon is tasked by the Asylum Director Dr. Lang to find the culprit in 24 hours. After searching every cell for the keys Gordon interrogates the inmates, including Gruber who calmly assures Gordon that he did not take the keys. When Gordon investigates files and blueprints, he is approached by Nurse Duncan who tells him that there are more files in the basement. On the way down, Gordon finds out that the nurse is no staff member, but an inmate and Duncan flees, opening the cells and releasing the inmates. During the riot she is trampled to death. Although the police thinks that Duncan is the one behind the assaults, her autopsy reveals that she too was brainwashed through the electric shocks. Meanwhile at the asylum, Aaron Danzing opens a door with the stolen keys and kills a guard. Gruber arrives and states that Aaron is his best work so far, revealing that he is the mastermind behind everything. They are disturbed by Director Lang, who enters the corridor. When Gordon and Bullock arrive, they find a mortally wounded Lang, who can only mutter "Gruber" before dying. Gordon finds a message from Gruber, in which the latter takes credit for the attacks on inmates and that, although he hoped to have a proper chat with Gordon, he left the Asylum.

After escaping Arkham, he and Danzing visit Buchinsky's old accomplice Irvin in his shop. A deeply afraid Irving leads Buchinsky to the back of the store, where he kept the electric gadgets of his old friend. After dealing with Irvin, Buchinsky and Danzing start hunting down Maroni. While Maroni has lunch in his restaurant, Buchinsky zaps the Penguin unconscious and attacks the rest with an electric grenade, to no avail. When the cops arrive, Maroni agrees to Gordons plan: putting him in protective custody and thereby luring Buchinsky into a trap. Maroni is brought to the GCPD, where they wait for Buchinsky to strike. However, Buchinsky manages to electrify every metal surface in the room, zapping anyone unconscious except Gordon, who wore rubberized boots. While Danzing tries to take the unconscious Maroni to the truck, Buchinsky expresses his disappointment because the people were merely stunned and not cooked alive by the electric flow. In this moment, Gordon reveals himself and aims his gun at Buchinsky, who compliments him on his shoes. He then uses a device to disarm Gordon through electricity and watches as Danzing attacks the detective, stating that no one in the room deserves Gordon's protection. He asks Gordon to let him kill his false friend and get on with his life. When he sees Danzing beaten down, he prepares to fight Gordon himself, but Gordon takes a cup from the next desk and uses the water inside to destroy the Electrocutioner's power source, disarming him in the process. Buchinsky is then arrested.

What The Little Bird Told Him 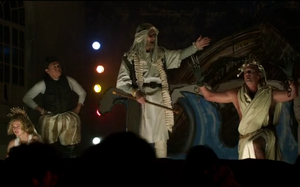 Buchinsky in a Shakespeare play. 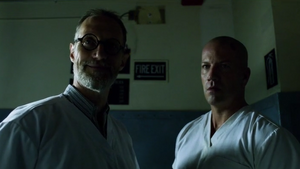 Buchinsky and Danzing about to kill the Asylum Director, Gerry Lang. 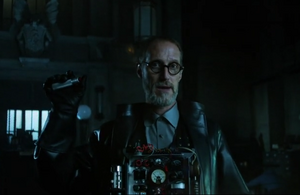 Buchinsky with an electric device. 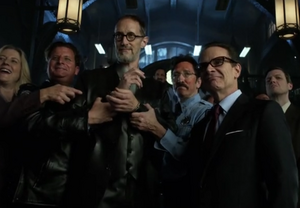 Cops pose for the media with an arrested Electrocutioner.