Aid Umarak on his quest of finding the Mask of Control in order to defeat the Toa Uniters and their allies (all failed).

The Elemental Beasts, also known as the Shadow Horde, are the army of humanoid monsters that appear in the BIONICLE series. They are in fact the Shadow Spawns created by Umarak after the latter received the new power from his master, Karzahni and transformed into the group of powerful monsters that control various elements.

They were originally Shadow Spawns who are the beastial minions that served Umarak in the BIONICLE series. During the 2016 storyline, the Shadow Spawns assist Umarak and the Shadow Traps on his quest for the Mask of Control to free his master, Karzahni from the Field of Shadows following his imprisonment in the hands of the Toa.

Later when Umarak gained the new power from Karzahni, he uses his power to transform the Shadow Spawns into the powerful monsters called the Elemental Beasts to aid him in the battle against the Toa Uniters and the Elemental Creatures.

In order to distract the Toa Uniters from interfering with his quest, Umarak tells his master, Karazhni who was imprisoned in the Field of Shadows to give him the new power to defeat the Toa. Karzahni then complied and give Umarak the power that can summon the Elemental Beasts from the elements of Okoto and the Shadow Spawn. Once it was done, Umarak then ordered both the Elemental Beasts and the Shadow Traps to attack the Toa as well as Okoto.

Soon afterwards, the Elemental Beasts began their attack by destroying the village in the Region of Jungle, which prompted the Toa Uniters and the Elemental Creatures to investigate.

The Lava Beasts are the members of the  Elemental Beasts. They are capable of controlling the powers of fire and lava as well as shooting fireballs from their mouths. They can also able to fly as well. Their natural tools are the Fire Crystal Wings, which can doubled as the Fire Crystal Blades for close combat.

Several Lava Beasts formed bridges of lava to attack the City of the Mask Makers. Near the city gate, two Lava Beasts captured Tahu and Ikir and separated them by stealing Tahu's Golden Mask of Unity. However, they were driven back by the Toa after their weakness was discovered. The Lava Beasts then retreated to pool their elemental powers and launch a barrage of lava at the city, but Tahu and Kopaka defeated all of them. Additional Lava Beasts attacked the city, but were dealt with by the Elemental Creatures and Okotans.

In the Black Crater, Umarak created more Lava Beasts to hold off the Toa. These Lava Beasts were soon destroyed.

The Quake Beasts are the members of the Elemental Beasts. They also have the Earth-based powers, allowing them to create boulders and crystals as well as throwing them at their enemies. Their natural tools are the Crystal Fists, which they can used for smashing through any matters, their brute strength and their sharp claws for combat.

The Quake Beasts were once Stone Traps until Umarak the Destroyer combined them with the element of Stone. The Quake Beasts along with Storm Beasts and Lava Beasts soon attacked the City of the Mask Makers to distract the Toa from their master's plans to free Makuta. After sustaining heavy casualties, the Quake Beasts retreated and rolled boulders at the city. Onua raised a wall of earth to block the boulders, and left Pohatu to deal with the remaining Quake Beasts. After defeating the first wave of them, the Toa left to stop Makuta's escape, while the Elemental Creatures and Okotans continued to defend the city from the Shadow Horde.

In the Black Crater, Umarak summoned more Quake Beasts to hold off the Toa while he completed the ritual. These Quake Beasts were destroyed by the Toa.

The Storm Beasts are the members of the Elemental Beasts. The Storm Beasts were created by Umarak the Destroyer by combining Water Traps with the element of Water, and were commanded to attack the City of the Mask Makers along with the Quake Beasts and Lava Beasts. After the first wave was defeated, the Storm Beasts retreated to call down a tremendous storm upon the city, but Gali and Lewa defeated them. The Elemental Creatures and Okotans continued to fight the Storm Beasts and others while the Toa set out to defeat Umarak.

In the Black Crater, Umarak created more beasts to hold off the Toa. One Storm Beast attacked Ekimu and nearly took his Mask of Creation, but Agil destroyed its mask and Kopaka destroyed it. The Toa then destroyed the remaining beasts. 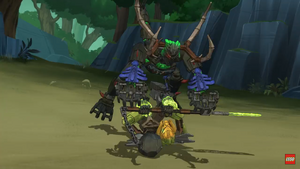 Their origins as Shadow Spawns. 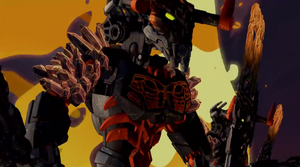 The Lava Beast after being transformed. 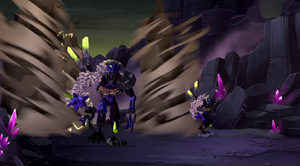 The Quake Beasts after their transformations. 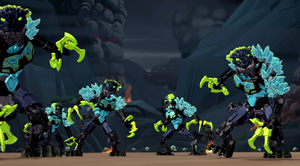 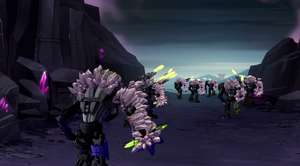 The Quake Beasts are heading for the Region of Jungle.