Elesh Norn is one of the main antagonists of the Magic: The Gathering block Scars of Mirrodin and, ultimately, one of the main antagonists of the overall recent story arc, as she became the dominant praetor of New Phyrexia. Part of Phyrexia, a horrifying biomechanical menace that is equal parts civilization of metal and necrotic flesh, and infection that spreads and engulfs all life, she came into being when the world of Mirrodin fell to its corruption, rising as the praetor (i.e. "lord") of the New Phyrexia faction known as The Machine Orthodoxy, aligned with White mana.

Originally known as Argentum, the world of Mirrodin was created by the golem planeswalker Karn and left to the governance of Memnarch. Karn, one of the many parties responsible for the destruction of the original Phyrexia, accidentally left off drops of the glistening oil in Argentum, a black fluid that Yawgmoth had developed as a late war machine for Phyrexia. Memnarch came in contact with the oil, and became utterly insane, desiring to become a planeswalker and changing Argentum into Mirrodin, creating soul traps and kidnapping beings from other worlds, creating a full ecosystem with various sapient races in order to search for a valid spark. The fight of the natives against Memnarch was the plot of the original Mirrodin block, but for all the atrocities he committed, he had one very important benevolent role: to contain the glistening oil.

After he died and his world warping madness ended, the oil was free to expand and fester, reaching Mirrodin's mana core and gaining enough power to infect it's inhabitants, containing the blueprints of Phyrexia within it. Generations upon generations, infected mirrans went to the plane's core, recreating Phyrexia by mutilating and rearranging their own bodies with metal, or by creating vats where dead flesh was thrown into as to have phyrexian newts spawning and thus increase their ranks. Within a few generations, enough infected mirrans and new phyrexian abominations managed to recreate their foul civilization within Mirrodin, digging new layers in order to recreate the original phyrexian environment and to expand their empire, and eventually take over the world of the mirrans.

New Phyrexia, however, did have one key difference from its original incarnation: while the old phyrexians were aligned almost exclusively with Black mana (the colour associated with death, darkness, selfishness, and ambition, though not necessarily evil, as morality is independent of the colour pie), these new phyrexians spawned all colours of mana, and as such they were divided into five different factions, with little tolerance for each other but nonetheless begrudgingly working together in order to spread Phyrexia's might. This included Black's enemy colors, Green (the colour of "nature" and life) and White (the color of light and order, often mistaken for "good" but actually just as capable of evil and cruelty, particularly in the form of fascism and xenophobia). Green became The Vicious Swarm, a loose amalgation of parodies of the natural order, without governance or intelligence behind them, while White gave rise to The Machine Orthodoxy, a theocratic faction that is essential a mockery of organised religion, divided into many sects that worship the scriptures known as The Argent Etchings, seeking to unite all life by removing free will and individuality, usually in the form of downright hellish mutilation and brainwashing.

Each faction of New Phyrexia is guided and governed by a praetor, and Elesh Norn is the praetor of The Machine Orthodoxy. While her exact origins are unknown, she seems to be a vat-grown phyrexian, as she can produce a porcelain-like metal "skin" that only native-born White phyrexians can produce (though indoctrinated organisms have this skin grafted into them, and it quickly spreads like lichens or fungi anyways).

Elesh Norn seemingly came to be the White praetor before the events of Scars of Mirrodin, and there is the heavy implication that the whole faction has been guided by her from the start, as she dictates (and manipulates) scripture. She and the other predators planned for years to take over the surface of Mirrodin, and by the events of Mirrodin Besieged she has sent her troops, spreading infections on the Razorgrass fields and eventually massacring en masse in enormous, organized armies. A short story in the flash site of the storyline also showcases that the Tangle was also targeted by Elesh Norn's forces, with her priests having subjugated and captured a Sylvok village. Eventually, the sheer strength of her armies was enough to take over Mirrodin's grasslands in a short period of time, scattering the already in-conflict leonin prides and isolating the few loxodon left, easily capturing many of either and infecting, mutilating and physically rearranging them into low ranking members of the Orthodoxy, and reappropriating their infrastructures into new temples. Only the stronghold of Bladehold still stood against the phyrexian menace, and its ultimate fate is unknown.

Even during the war, the conflict between the praetors was intense, especially over the "Father of Machines", Karn himself, now hopelessly corrupted and driven mad by the infection. Of the praetors, Elesh Norn was the most adamant in keeping the delusional planeswalker in power, believing him to be a worthy figurehead for Phyrexia and an excellent war leader. The other praetors, however, especially the Blue aligned Jin-Gitaxias and the Black-aligned Sheoldred, thought very little of him at best and tried to murder him in order to take over Phyrexia and become the new Father of Machines (or, in Sheoldred's case, new Mother of Machines). In one of the old flash site's snippets, priests of Elesh Norn attempted to bring Karn to the surface where he'd be safest, as she was aware of Jin-Gitaxias' machinations, but were unsuccessful.

Eventually, the planeswalkers Elspeth, Koth, and Venser rescued Karn and made him immune to the infection, ending his domain over Phyrexia and thus his relevance to the praetors.

While this could have made a fool out of Elesh Norn, it actually worked best in her favour, as her forces managed to crush Sheoldred's and Urabrask's (the Red praetor, who betrayed the rest of Phyrexia by letting the surviving mirrans have their refuge in his realm) domains, ensuring her status as the dominant praetor and possibly as the new Mother of Machines. Now as effectually the queen of New Phyrexia, she appears to be waiting for a chance to take over other worlds, as her quote above implies.

At first glance, Elesh Norn appears to be a demented, delusional religious fanatic, most of her quotes being fairly stereotypical fundamentalist statements ("May our blessing sever the tongues of the forsaken", from the card Priests of Norn), down to highly pretentious chastising of other praetors ("Your creations are effective, Sheoldred, but we must unite the flesh, not merely flay it"). In truth, however, Elesh Norn is a highly deceptive and manipulative individual, deliberately puppeteering other phyrexians, including her own faction, to do exactly as she wishes. Not only is she fully aware of the machinations of her fellow praetors, she seemingly plays into them, as with the episode of her priests trying to get Karn to the surface.

Most importantly, she is fully aware of the implications of her mandates: given that most phyrexians take everything literally, she understands perfectly that a statement as simple as "we must eliminate the self to accomplish unity" will most likely lead to something like physically sewing people together. This awareness of her deeds makes her not only dangerously intelligent and self-aware but also single-handedly responsible for countless acts of genocide and other atrocities her faction has committed.

Elesh Norn's ultimate goal is to unite all life under the banner of The Machine Orthodoxy, indoctrinating and physically mutilating as she fits to see this desire become reality. She abides by none of the particulars of the individual sects within her faction, although she seems to at least entertain some of their demands, such as having her skin removed and replaced by white porcelain (that may or may not be natural to her body). Although she fought fervently to impose Karn's rule, she has no love or sincere adoration for him, seeing him only as a necessary figurehead in order to keep Phyrexia as a whole united. She also appears to have a power-hungry streak, not only manipulating the scriptures to suit herself, but also imposing her rule over all of Phyrexia once Karn was no longer available as a figurehead.

Interestingly, many of her internal organs have once belonged to mirrans (phyrexians, seeing flesh and metal alike as a commodity, constantly remove and add body parts, often from other phyrexians). "Compleated" (i.e. fully converted into phyrexian) mirrans are seen as lower than pure phyrexians within the Orthodoxy, so this could either imply some sort of lack of prejudice, or boost her own ego via "generosity" (as it is considered an honor to have one's body parts in a praetor).

Little has been seen of her magical abilities, though it is clear that she is a powerful sorceress. Being White-aligned she uses White mana (the Magic color of order), her card mechanics manifesting as boosting creatures under your control and withering creatures your opponents control, implying some sort of evil light that strengthens other phyrexians and damages "heretics" (curiously, an older White card, Holy Light, produced a similar effect). Cards that depict her actually in combat include Marrow Shards (which depicts sharp shards of her porcelain skin stripping themselves from her arm and being fired at an opponent), Due Respect (where she uses a "holy" light beam to make all other phyrexians bow to her) and Rout (where she blasts the mirran resistance with holy light)

Thus, one can infer her magic centers about some photokinetic abilities and ferrokinesis (manipulating her own porcelain metal skin). 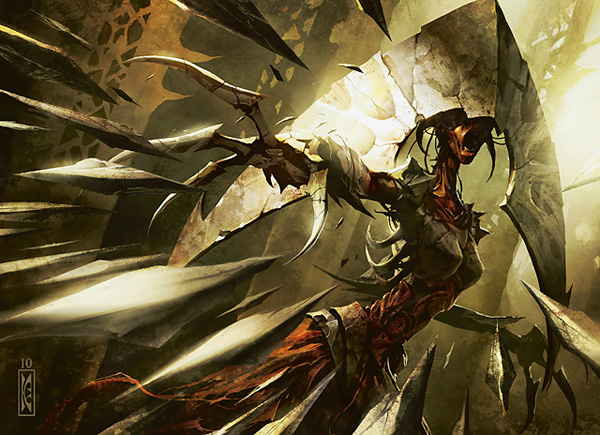 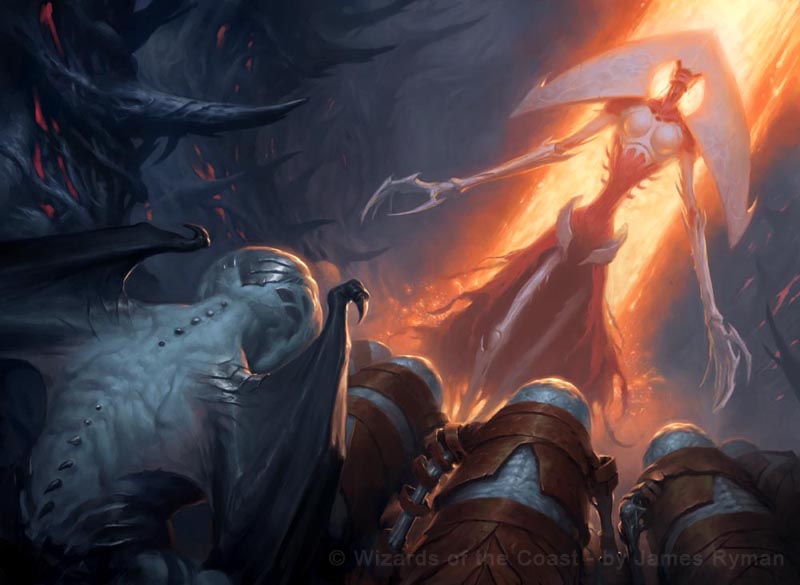 Other phyrexians bowing before Elesh Norn 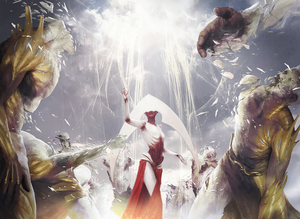 Elesh Norn destroying her foes
Add a photo to this gallery

Retrieved from "https://villains.fandom.com/wiki/Elesh_Norn?oldid=3547656"
Community content is available under CC-BY-SA unless otherwise noted.