The Unhappy Mint of Hades

Elfin Mint is the Extra Stage boss of the fanmade Touhou Project game, The Last Comer. She has a familiar named Zankurou who is the princess of her old love interest, Hades.

Elfin was a nymph who was turned into a weed by Persephone out of anger. She lost all her faith afterwards, thinking she would soon disappear; but an unexpected person in the form of Hades saved her, causing her to turn into a mint for trying to seduce him, and her flower form gained popularity for is pleasing scent amongst the people. When Hades moved to a place within the distant sea of stars, Elfin longed to see him once more, spreading her seeds that were constantly reproduced with herself to propagate her descendants across the world, bringing forth countless fragrances delighting humans for the sake of her goal. When she returned to the realm of the dead, she realized that Hades had already left, but didn't want to be forgotten.

After the morning star crash-landed in the forest near the Hakurei Shrine, Elfin followed it, not realizing that the star's face was covered with the same flower that was her "namesake" before being consumed by fire. Once in Gensokyo, she decided to fill it with mint plants to calm down the residents of Gensokyo who had been visited by Mumumu Mikaboshi and the angels that had followed her there to battle the demons in Gensokyo. Incidentally, it was Elfin's master plan that brought about the attention of heroines Reimu, Marisa, and Sakuya to her.

Elfin has red eyes, blue hair, and pointy ears. She wears a fuchsia headband with two larger ribbons attached to the sides, as well as a fuchsia string around her neck. She has a light green and white dress with a fuchsia belt and matching bands around the ends of her sleeves. She doesn’t wear shoes, but she has two silver bracelets around her left ankle as well as two more on her right wrist. Elfin has four white, angular wings, portions of which seem to float separate from her body. Accompanying Elfin is a small, spherical, light red creature with a scowling face, two bat wings, and tall hair. 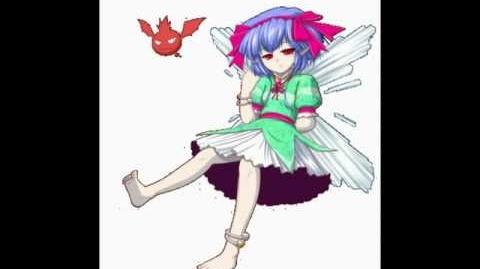 Retrieved from "https://villains.fandom.com/wiki/Elfin_Mint?oldid=2578949"
Community content is available under CC-BY-SA unless otherwise noted.