Sell the dinosaurs to make a profit and become rich.

Kill Owen Grady and Claire Dearing to prevent them from interfering with his plans.
Use the Indominus rex DNA sample to create more hybrid dinosaurs (all failed).

He was the assistant and finance manager of Benjamin Lockwood, one of the co-founders of the original Jurassic Park (alongside John Hammond) and the arch-nemesis of Claire Dearing. He seeks to make a profit off of selling the dinosaurs trapped on the island of Isla Nublar by any means necessary, which includes killing those who either outlived their usefulness or stand in his way.

He was portrayed by Rafe Spall in his first villainous role.

Mills first appeared in Lockwood's estate, where he greeted Claire Dearing (the former operations manager of Jurassic World) and told her about the impending crisis of Isla Nublar, as an imminent volcanic eruption may destroy the island and kill all of the dinosaurs residing there, and that the government will not rescue them because doing so would lead to disastrous results for the mainland. Mills told Claire that Lockwood has financed an operation that will help rescue the dinosaurs from the cataclysm and transport them to another island as their new reserve. He also tells Claire to hire Owen Grady for the mission due to his extensive training of Velociraptors (particularly the last surviving one known as Blue).

Accompanying Owen and Claire were Ken Wheatley and his team of mercenaries, whom Mills had hired to capture the dinosaurs for him to make money. After capturing Blue, Wheatley and his mercenaries betrayed Owen, Claire and their friends by leaving them on the island to die while capturing more dinosaurs and bringing them to the ship in cages. This made both a distraught Owen and Claire realize that the rescue operation was nothing more than a ruse to capture the dinosaurs and sell them off for profit. It also turns out that Mills previously sent a mercenary team to recover a specimen of the deceased Indominus rex in order for Henry Wu to create a new deadly hybrid dinosaur for weaponry: the Indoraptor.

Though Owen, Claire and their friends manage to evacuate the exploding island, they watch sadly as an unfortunate Brachiosaurus is left to die in the inferno of the island. Once the group arrives at Lockwood's Mansion, they end up being apprehended by Wheatley and locked up by Mills, who reveals that he's behind the plot and that he intends to sell the dinosaurs (including the Indoraptor) as weapons to arms dealers and warlords for profit (just like Vic Hoskins), all while mockingly calling Owen and Claire the "Parents of the New World". When Lockwood finds out about Mills' true intentions from his granddaughter Maisie, he angrily confronts Mills for his betrayal, but Mills kills Lockwood by smothering him with a pillow while confining Maisie to her bedroom.

Just as Mills proceeds with his plan by hiring an auctioneer Gunnar Eversol to auction off the captured dinosaurs, Owen manages to release himself and Claire by having a Stygimoloch to break them out and disrupt the auction, just as the Indoraptor is being presented for auction against Wu's objections. Mills, horrified that Owen and Claire escaped and ruined the auction, tried to tell his men to retract the track so the buyer could get the Indoraptor, but Owen foiled it and disconnected the track to prevent the auction from proceeding further. After the Indoraptor escapes and kills Wheatley and Eversol, Owen rescues Maisie before he and Claire are confronted by an enraged Mills, who reveals a shocking truth: Maisie is actually the clone of Lockwood's real daughter and the true cause why Lockwood and his partner John Hammond broke up (as Hammond opposes human cloning). Just then, the Indoraptor kills the two mercenaries and attacks the heroes, allowing Mills to escape with the Indominus sample. Fortunately, Owen gets Blue to attack the Indoraptor, sending the latter to fall on a glass roof and getting impaled to death on a Agujaceratops skull on display.

Maisie then freed the other dinosaurs from captivity into the mainland, much to Mills' distraught as he sees his remaining men being trampled to death by the dinosaurs. Battered and in pain, Mills tries to take the Indominus sample to escape, but by an unexpected surprise, Rexy, the original Tyrannosaurus rex of the old park, grabbed him in her jaws and devoured him (with a Carnotaurus also biting off his bottom half before being scared off by Rexy) before crushing the Indominus rex sample, destroying the last piece of evidence of the I. rex's existence and ending the creation of future hybrid dinosaurs, thus leaving Mills' plan in vain. All that's left of Mills was his right leg that was then eaten by a pack of Compsognathus, which was detached when Rexy devoured him before she escaped with the other dinosaurs.

With Mills' plot foiled and the dinosaurs now residing in the mainland, the humans decided (per Ian Malcolm's suggestion) that they (along with other animals) will have to co-exist with the dinosaurs (as seen with Rexy and a male African lion roaring at each other in a zoo).

When he first appeared, Mills started off as an honest and trustworthy gentleman dedicating his life to upholding Lockwood's legacy of creating and preserving dinosaurs, even being close to Lockwood's granddaughter Maisie and hiring Claire and Owen to his cause of rescuing the dinosaurs due to their extensive knowledge of the defunct Jurassic World.

However, as time goes by, Mills' true nature begins to unfold: that of a vain, manipulative, antisocial, greedy, ambitious, treacherous, and a truly dangerous sociopath, yet short-sighted, wimpy and cowardly businessman with the behavior akin to a spoiled child unsatisfied with his already powerful position, as he actually intends to sell off the dinosaurs as living weapons on the black market. To that end, he was willing to murder anyone who stood in his way, as seen in his attempt to dispose Owen and his allies by leaving them to die at Isla Nublar; he even murdered Lockwood to cover his tracks and attempted to have Maisie under his custody for financial reasons as she stands to inherit Lockwood's fortune, and he later tries to kill Owen and Claire with two mercenaries once they manage to crash his auction. He even coldly confessed that Maisie was actually a clone of Lockwood's deceased daughter and that she was the true reason behind the break-up between Lockwood and Hammond (as the latter opposed human cloning).

It is also implied that, since Maisie is a clone, Mills wanted to keep her so that he could have Dr. Wu and his scientists perform presumably painful experiments on her with the intent of improving any future bio-weapons they could create. Judging from how he pushed her into her own room and how he spoke to her for the last time, he possibly viewed her as much of an inhuman animal as the dinosaurs. However, he has little to no actual knowledge of dinosaurs, as he couldn't find Blue without Owen Grady, ran away from a Stygimoloch (a Herbivore, yet he still treated it no different from a carnivore) and quickly forgot that the T. rex was still close to the mansion.

He is also a deluded man who is unwilling to admit his own flaws as his own actions are much more self-destructive and so poorly thought out that it pretty much negates his self righteous claims. He is also quick to blame others for his self-inflicted mistakes and faults. His buyers expressed doubt and annoyance in his self-proclaimed competence when he didn't have the dinosaurs at the Lockwood estate yet, and even his own employees think of him as an idiot and look down at him as Dr. Wu views him as a child and weakling with no vision or spine whatsoever, while Wheatley is just impatient with him. Adding further to his bad judgment, he would unwittingly risk exposing the very secrets he tried cover up as he was willing to carelessly sell the Indoraptor without considering the legal consequences.

In conclusion, Mills had to have been his own worst enemy as his greed, sense of denial, short-sightedness and unwillingness to listen to reason proved to be his downfall; this was shown as when Maisie released the dinosaurs from captivity, instead of escaping immediately, Mills attempted to retrieve the Indominus sample to create more hybrids, only for Rexy, the old park's T. rex, to devour Mills and destroy the sample.

"Get this thing outta here!"

Eli seeing the dinosaurs had been set free.

Eli thinking that it's over.

Eli's last moments when he merges from the SUV to get the sample.

Eli gets eaten by Rexy and Toro.
Add a photo to this gallery 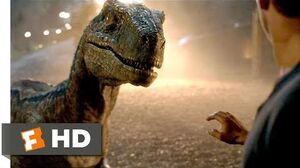 Retrieved from "https://villains.fandom.com/wiki/Eli_Mills?oldid=4325953"
Community content is available under CC-BY-SA unless otherwise noted.