Abusing his wife and son.

Elias Voorhees, or simply known as Mr. Voorhees, is the abusive husband of Pamela Voorhees and the father of Jason Voorhees.

In this version, people see through flashbacks that Elias regularly abused his son, Jason, for his deformities and the fact he was mentally handicapped. Regularly chasing Jason while beating him with a belt, calling him a monster and mocking him that he should "take it like a man" claiming he couldn't run to his mother forever. As Elias chases Jason he finds Pamela (referred to as Doris in this comic) who having had enough of his abusive behavior towards both her and Jason promptly kills him with a machete to the head.

In this version, Elias is portrayed as a coal miner in Ohio during the 1940's. Having formed a relationship with Pamela who was only a teenager despite Elias himself appearing to be a bit older they lived in a small trailer together. If Pamela made any mistakes or if Elias even thought she may of made one, Elias would verbally and physically abuse her. Unknown to Elias, he got Pamela pregnant with Jason and continued to beat her when annoyed. As Pamela would mutter to herself believing she and Jason could communicate to one another, Elias who was annoyed decided to violently beat and raped her before going to bed. Fearing for both her and Jason's safety, Pamela kills Elias with an axe before destroying the trailer they lived in and dumping Elias' remains in Crystal Lake.

While versions vary to some degree one thing that is shared in nearly if not all versions is that Elias was an abusive man who tormented his family. He is said to of been a man who rarely spoke and was in the films either unfaithful to his wife or abandoned them for unknown reasons. 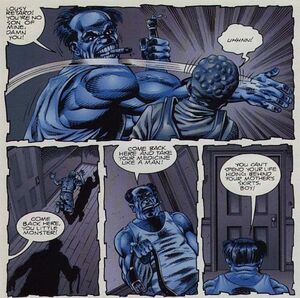 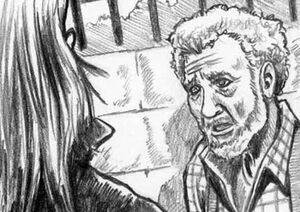 Elias as he appeared in a deleted scene in Friday the 13th: Part VI.