Ringmaster and owner of Freek Land

Turning people into Freeks and exhibiting them for profit and entertainment.

Elijah C. Skuggs, also nicknamed Skuggs and Red Swan, is the main villain of the 1993 American comedy movie Freaked (originally titled Hideous Mutant Freekz). He is an nastily evil American businessmen with an authentic Southern accent, who is both the wealthy, eccentric owner/ringmaster of the infamous Freek Land mutant farm in South America and an insane, amateur scientist who used the controversial fertilizer known only as Zygrot 24 to transform all his victims that he tricked and kidnapped into his Freeks.

He was portrayed by Randy Quaid, who also played Alameda Slim in Disney's Home on the Range, Nick Laemle in Parents, and Sheriff Mike Collins in Hard Rain.

The news break ends to reveal "The Skye Daley Show", already in progress. Skye is interviewing beloved former child star Ricky Coogin . Rather bluntly, Skye asks how Ricky so quickly went from one of America's sweethearts to a name that makes children scream in terror.

It all began when Ricky and Ernie cross paths with a group of protesters with each other for the rest of the drive. They decide to escape but is caught by a pair of talking, machine-gun toting Rastafarian eyeballs who take him to Elijah's lair. Elijah informs Ricky that at the next show, he plans to mutate him into a full beast that will slaughter all of the other freaks, a surefire moneymaking event. On his way back, Ricky runs into the other freaks in the middle of their own escape attempt. He tries to warn them about the eyeballs, but none of them take him seriously. He gets into a blade fight with Ortiz, who ends up running off to chase a squirrel, catching the attention of the trigger-happy eyeballs who chase him out of the park. The freaks decide to elect Ricky as their new leader and Julie admires him for his selfless act.

As she embraces Ricky, Skye rises again, this time to be gunned down by Ernie. After Ricky and Ernie discuss what they have learned from their whole experience, they wave goodbye to the studio audience. Before the credits roll, though, the machete-wielding Skye lunges at them one more time. 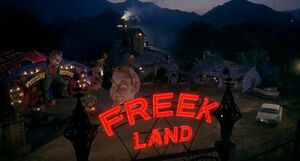 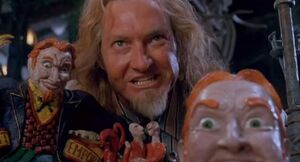 A model of Skuggs' "Freek World" he believes would rival Disney World. 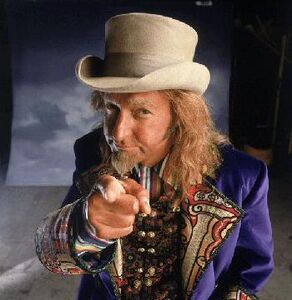 Elijah C. Skuggs
Add a photo to this gallery
Retrieved from "https://villains.fandom.com/wiki/Elijah_C._Skuggs?oldid=4298898"
Community content is available under CC-BY-SA unless otherwise noted.