Elise, also known as The Spider Queen, is a villainous playable character in the multiplayer online battle arena game League of Legends.

The powerful mistress of the Noxian House Zaavan, Elise was transformed into an arachnid beast by the bite of a spider demigod in the Shadow Isles. Now a collector of artifacts and human blood, Elise now lures the naive into her web with the power of seduction in order to maintain her beauty forevermore.

The 106th champion added to the game, Elise was released on October 26, 2012, and is most commonly played in the jungle.

She is voiced by Sydney Rainin-Smith.

Many centuries ago, Elise was born to the Noxian noble family of House Kythera. A politician and seductress at heart, Elise learned ways to gain power and influence easily among the noble houses and plotted to marry into the powerful House Zaavan. While this betrothal was opposed by many in the Zaavan family, Elise was crafty enough to make the marriage a reality through careful manipulation of her fiance, which in the end granted the young noblewoman considerable influence.

As the years went by, Elise's influence in House Zaavan only grew, attracting the resentment of her husband. One night, in an act of jealousy, Lord Zaavan poisoned Elise's wine, causing it to dissolve her flesh, leaving her horrifically disfigured. Elise's husband threatened her with a slow and painful death, stating that he would not give her the antidote unless she agreed to leave society forever. Elise, using her own deception, was able to both find the antidote and stab a knife through her husband's heart, leaving Zaavan to die on the floor. But the damage was done, and Elise's horrific appearance was now permanent.

Now the mistress of House Zaavan, Elise rarely made public appearances, and when she did she would do so from behind a veil that obscured her scarred face. As a result, the prominence of House Zaavan began to dwindle over time, for Elise's retreat from public life had left the noble family isolated and without allies.

One night, Elise ran into another veiled woman carrying the sigil of a Black Rose, the symbol of the ancient cabal led by a Pale Woman. The woman told Elise that her talents could help the cabal greatly, and the dark magic she could find could make her whole once more. Curious, Elise sought out the secret society in the streets in the night, and when she found it, she became a regular visitor among the cabal's members. Eventually, Elise was able to make acquaintance with the Pale Woman and was inducted into the society, embracing their ways and being assigned a special mission.

For her mission, Elise was to be sent to the Shadow Isles, a haunted archipelago in the eastern sea. There, she would retrieve an athame with a serpent blade, a weapon that lay in the den of the Spider God, Vilemaw. With its power, the Pale Woman promised she would restore Elise's beauty, a reward that drove Elise to eagerly accept this dangerous journey.

Elise departed on a ship along with a group of other Black Rose agents, and fought off wraiths as they sailed into the Black Mist. By the time, the party made it to the lair of the Spider God, only half a dozen remained, but by the time they were inside, Elise was the only one left alive.

Spotting the serpent-bladed dagger, Elise picked up the weapon from the rotted corpse of its previous owner, but not a moment passed when Vilemaw sank its fangs into her shoulder. Elise screamed and fell on the blade, piercing her heart as both powerful magic and venom coursed through her body. When Elise rose, she realized she was even more beautiful than she had been originally. And with the powerful venom of the Spider God in her veins, Elise now had monstrous arachnid legs coming from her back.

As Elise looked up at the hideous glare of Vilemaw above her, both she and the Spider God felt their new connection, a symbiosis which could prove beneficial to the both of them. Both the Spider God and the Shadow Isles spirits let Elise go free back to her ship with the athame, and she made her way back to Noxus undisturbed.

When Elise presented the athame to the Pale Woman, she warned Elise that without regular sacrifices to the Spider God, her newfound beauty would fade overtime, and thus Elise should make sure to lure hapless victims to Vilemaw's lair every so often. As part of the their partnership with Elise, the cabal would also provide acolytes for Elise to sacrifice on a regular basis, and in return Elise would explore the Shadow Isles for any magical artifacts they might find useful.

Returning to her role as mistress of House Zaavan, Elise kept her true nature a secret and became a reclusive, mysterious noblewoman, known to be beautiful yet always unreachable. Over the centuries, Lady Elise of House Zaavan became an urban legend, with rumors of a terrible beast living in the dilapidated halls and cobwebs of her palace.

In game, Elise is a diver-type champion, a highly-mobile fighter that singles out targets before charging towards them. Elise's ultimate, Spider Form, lets her transform into a spider and back, while her passive, Spider Queen, gives her attack bonuses and summons spiderlings when she goes into her spider form, with more spiderlings summoned the more abilities she landed while in human form.

While in human form, Elise has more range and can use Neurotoxin to deal damage based on the enemy health, Volatile Spiderling to release an exploding spiderling, and Cocoon to stun enemies with her webs. While in spider form, Elise has more movement speed and can use Venomous Bite to lunge and deal damage based on enemy health, Skittering Frenzy to increase the attack speed of her and her spiderlings, and Rappel to go into the air with a web before dropping on an enemy.

In Noxus, Elise likes to take on the role of a seductress, but in the Shadow Isles, she transforms into a giant, monstrous being who both eats and sacrifices her victims without mercy. Elise is shown to care little for human life except her own, taking pleasure in killing her victims and even mocking them for falling into her trap. Even as an agent of the Black Rose, Elise doesn't care much for the cabal and merely works with them out of convenience, which shows that while she is self-concerned she is still capable of political maneuvering and the forming of mutually-beneficial relationships. However, Elise is shown to care deeply for her spiderlings, and shows regret whenever one of them is killed by interlopers. 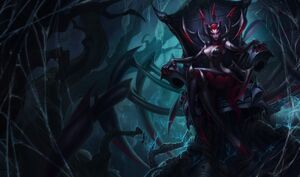 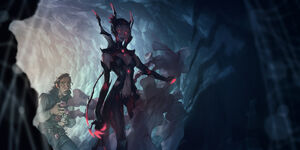 Elise as she appears in Legends of Runeterra. 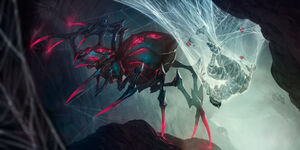 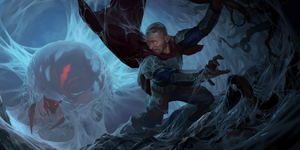 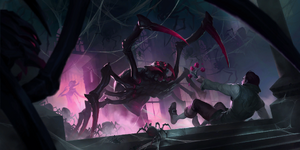 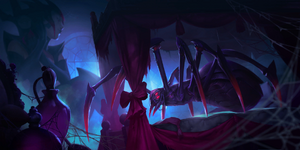 Elise caring for a spiderling. 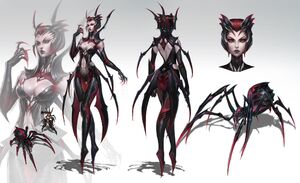 Concept art for Elise.
Add a photo to this gallery 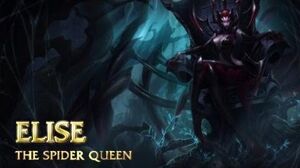 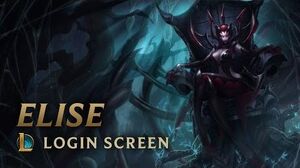 Elise, the Spider Queen Login Screen - League of Legends
Add a photo to this gallery

Retrieved from "https://villains.fandom.com/wiki/Elise_(League_of_Legends)?oldid=3880747"
Community content is available under CC-BY-SA unless otherwise noted.