Before the events of Return To Castle Wolfenstein

The Elite Guards (German: Elitewachen) are special SS squads consisting entirely of women. Trained by Helga von Bulow and later by Marianna Blavatsky, the Elite Guards are fanatically loyal to them. They are first encountered in The Defiled Church of Wulfburg where they help Helga and doctor Zemph to extract the fluids from the corpse of third Dark Knight and later they help Marianna Blavatsky to perform the anointing ceremony without any disturbance in Unhallowed Ground near Chateau Schufstaffel. Their last appearance occurs in the ruins of Castle Wolfenstein where together with Black Guards they put up fierce resistance to zombies who threaten to overrun the castle (they are wounded and heavily battered). These women are ruthless and efficient killers hence the name of their organization.

The member of Elite Guard squad can be only a woman but before she can become a member, she must go through extremely physical exercises to prove their strength. It is unclear what, if any ranks exist within the Elite Guard squad. They are regularly seen giving orders to regular soldiers so their overall status appears equal to that of officers or NCOs. Initially they take orders directly from Helga. After her death, they are under the command of Marianna Blavatsky and it is unclear who commands after her.

Elite Guards are very rarely taken by surprise, are always cautious and are highly nimble and athletic.

As they are specifically created for SS Paranormal Division they are often send to the places and mission involving occultism and paranormal occurrences such as exploring the ruined cathedral of Wulfburg or the ceremonies involving raising the dead. They are rumored to be a part of a witches' coven which means if one of them dies, others feel this which fuels their anger.

Elite Guards are young women who wear a tight, black leather uniform and high-heeled boots. Sometimes they can also wear two piece leather uniforms that leave their midriffs exposed. Some of them also wear a black beret on their heads along with shades. In the missions that take in African Tombs, a member wears camo and sandy colored uniform.

The Elite Guards are primarily armed with Sten Submachine Guns or suppressed Lugers. They can sometimes carry MP40s (and in some modifications they are equipped with MP34s). The sniper variant of the Elite Guard, will be armed with a Mauser Rifle; despite it having no scope, they still can hit you at very long distances with amazing accuracy even before you see them, plus with the fog that is blurring your vision, it just makes spotting them much more difficult. 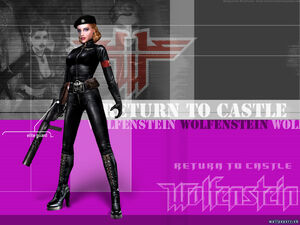 A member of Elite Guard squad. 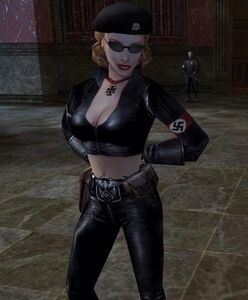 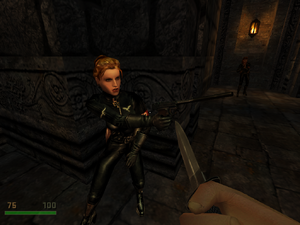 Elite Guards in The Defiled Church. 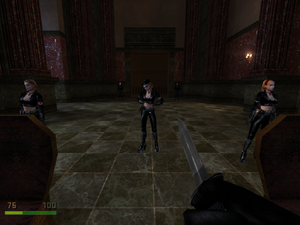 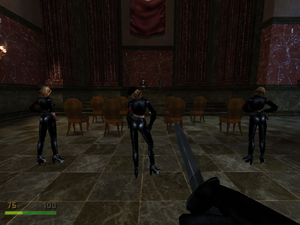 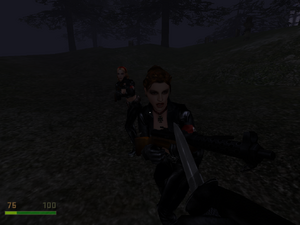 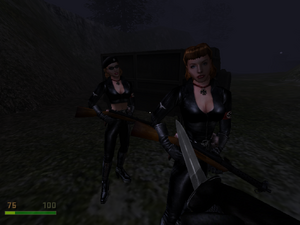 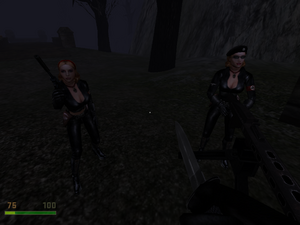 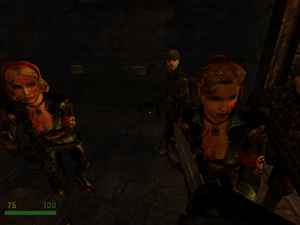 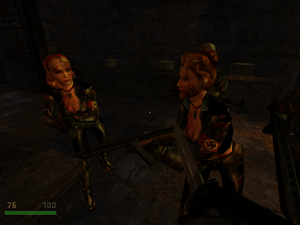 Wounded Elite Guards in Castle Wolfenstein.
Add a photo to this gallery

Retrieved from "https://villains.fandom.com/wiki/Elite_Guards?oldid=4261523"
Community content is available under CC-BY-SA unless otherwise noted.