Villains Wiki
Register
Don't have an account?
Sign In
Advertisement
in: Cowards, On & Off, Teams,
and 18 more

Controlling an army of Goombas, Koopas, and Shy Guys

Bragging about each other's strengths and weaknesses.

The Elite Trio are supporting antagonists from the Mario & Luigi series. They are members of Bowser's Koopa Troop army. The trio is comprised of Sergeant Guy, Corporal Paraplonk, and Private Goomp.

The Elite Trio first appear in Dimble Wood moving a Banzai Bill Cannon that they plan to fire at Bowser's Castle which was currently under Fawful's custody. However, they lacked ammo, prompting Bowser to find one for them. Once Bowser obtains a Banzai Bill from a Wiggler, the three fire the cannon, only for the castle to fly towards the site and crush Bowser and the cannon. When Bowser grows giant due to the Mario Bros. boosting his adrenaline to bring him back to life, the trio observe the battle, with Corporal Paraplonk teaching Bowser how to fight in giant battles.

Later, while finding the Star Cures, after exiting the Tower of Yikk, Bowser spots Private Goomp wandering about. When interacted, Private Goomp tells his king that one of the Star Cures can be found in his treasure chamber beneath his castle. Bowser then rushes off leaving Private Goomp behind. In the treasure trove, after Bowser defeats the Fawful Express and obtains the second Star Cure from a safe, the trio tell Bowser to look back in the safe for something else was in it. With his back turned, the three push Bowser into the safe, revealing that they now serve Fawful who promised them extra rations. They then take the safe to Peach's Castle, which was also under Fawful's custody.

In the post-credits scene, while Bowser is bedridden after being defeated by the Mario Bros. following the destruction of the Dark Star and Fawful, the Elite Trio arrive and apologize for their betrayal, asking to rejoin the Koopa Troop. Bowser responds that he will pardon them if they help with the repairs on the castle, which they go off to do.

It is revealed that the trio have been promoted to Bowser's royal guards (having the word Elite in their name) and arrive with Bowser and Kamek to Pi'illo Island to capture Princess Peach. In Dreamy Driftwood Shores, while expanding the layers of the Dream World for Peach to be safe from Bowser and his minions, it is revealed that the "Peach" that Mario and Imaginary Luigi were guiding was actually Kamek, having kidnapped the real one back in the real world of Driftwood Shores. He summons the Elite Trio to fight the Mario Bros., only for them to lose. In anger, Kamek demotes them to janitors, much to their disappointment.

In Neo Bowser's Castle, after the Mario Bros. defeat Antasma, the trio roll giant Bob-ombs down the spiraling ramp to prevent the Bros. from getting to Bowser. Once the Bros. reach the top, the trio charge at Mario and Luigi, only for the Bros. to move to the side, causing the three to fall to the bottom of the ramp.

During the ending, while Bowser and the troop return the Mushroom Kingdom, Bowser praises the trio that they did well for their usual standards, much to their joy. When the Zeekeeper breaks the Dream Coin causing thousands of coins to scatter, Private Goomp and Sergeant Guy cause the Koopa Clown Rock to rock so much while collecting raining coins that it falls into the ocean, prompting Kamek and Corporal Paraplonk to rescue them.

In Minion Quest: The Search for Bowser, it is revealed that Private Goomp was one of the first two Goombas that Mario and Luigi fought on the Koopa Cruiser alongside Captain Goomba, sparking a rivalry between them. In the level "Goombas vs. Goombas", when Captain Goomba confronts Fawful and demands him to return Bowser, Private Goomp appears and tries to defeat Fawful himself, only to be brainwashed by gas that comes from Fawful's headgear. Captain Goomba defeats Private Goomp, but Fawful gets away. Later in the Beanbean Kingdom level "The Rival Trio", Private Goomp returns with his teammates in training, Corporal Paraplonk and Sergeant Guy to form a trio and battles Captain Goomba and his team for copyright infringing his "plan" to save Bowser. After the battle, the trio argue over their leadership skills, prompting Captain Goomba and his Squad to make their leave.

The Elite Trio play the same role in the main game. In Bowser Jr.'s Journey, the trio only appear in the post-game, where Bowser's comrades have shunned them for their betrayal and claim that they must "earn back their trust". Bowser Jr. believes their treason was from the influences of Malatone:X and challenges them to battle. After their defeat, the Koopa Troop welcome them back in and they join Jr.'s army, while having to be Bowser Jr.'s new punching bags. They have the same types and abilities as in Minion Quest: The Search for Bowser.

The leader of the trio, Sergeant Guy is a green Shy Guy carrying a backpack containing a small silver pipe and Magikoopa wand. In Mario & Luigi: Dream Team, he also carries a Bowser flag.

In Minion Quest and Bowser Jr.'s Journey, Sergeant Guy is a ranged type and his ability is Sure Shot, increasing the accuracy of the team. As an enemy captain, he can use the Call for Backup command to summon a reserve member of his squad.

Corporal Paraplonk is a Koopa Paratroopa with green shoes, a red shell, and a red bucket on his head that serves as his helmet.

In Minion Quest and Bowser Jr.'s Journey, Corporal Paraplonk is a flying type and his ability is Cranium Crush, allowing him to hit an enemy twice from above. As an enemy captain, he can use the Shell Shock command where he uses his shell to damage multiple opposing squad units at the cost of temporarily becoming dizzy and lower defense.

Private Goomp is a Goomba that wears a blue shirt and cap, resembling pajamas. He has a personal rivalry with Captain Goomba. He is considered to be rude, snarky and selfish, as he continuously insults Bowser behind his back and wishes to be the one to boss him around. He also had no qualms with betraying him for Fawful by shoving him into a safe. He is also cowardly, as he begged Bowser for his old job back despite his earlier betrayal.

In Minion Quest and Bowser Jr.'s Journey, Private Goomp is a melee type and his ability is Rocket Headbutt, making him deal a powerful headbutt to a single enemy. As an enemy captain, he can use the Clash of Captains command to make him initiate a one-on-one battle with the player's captain. 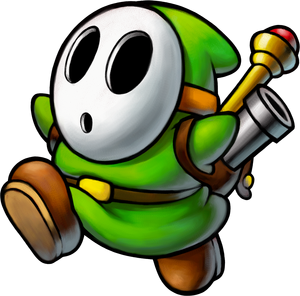 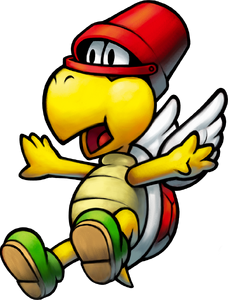 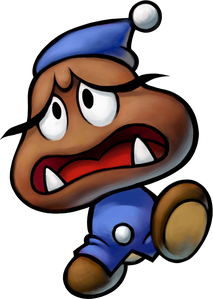