Eliza is a playable character and main antagonist of Skullgirls. Is the celebrity diva of New Meridian's premiere nightclub known as Bastet's Den. Unbeknownst to the club’s patrons, however, she is also been host to the skeletal Parasite Sekhmet for untold years.

Widely known for her blood drive charities, in reality these serve to feed Sekhmet and maintain Eliza's ageless beauty. Recently discovered and blackmailed by the Medici into pursuing the Skull Heart, Eliza’s ancient ambitions stir once more.

She is voiced by Michelle Ruff.

Eliza was once known as Neferu, living in a queendom which existed in ages past. She was an advisor to Queen Lamia, but started to grow with powerlust after fusing with a Theon known as Sehkmet, which granted her immortality as long as she could get blood. She started a war against Queen Lamia, killing her two daughters, Aeon and Venus, and almost destroyed the whole world in the process. During this war she confronted Samson's original host, Delilah, who also died.

As a result of this war, people started fearing the Theons, shunning them from society and calling them Parasites. Neferu went into hiding, assuming various identities to disguise herself and live without calling attention, apparently just waiting for the right time to resurface.

On the present day, Neferu assumed the identity of Eliza. She works as a famous club singer in the Bastet's Den night club, being well known for her charity blood drive work. Of course, this charity work is just a front she uses to obtain blood for herself. She is accompanied by two feral bodyguards, Albus and Horace. She seems to not mind her current lifestyle, though she may resume her original plans if given a good reason.

On Eliza's story mode, the Medici Mafia have learned the truth about her charity work and decided to blackmail her to defeat the current Skullgirl and retrieve the Skull Heart for them. Though she warns them they don't know who they're dealing with, she decides to play along and go after the Skull Heart anyway. Vitale Medici also sends Cerebella to keep an eye on her.

Eliza initially confronts Squigly. Leviathan, Squigly's parasite, recognizes Sehkmet and tells Squigly who Eliza truly is. Eliza offers them to join her, but they obviously refuse and fight her. After Eliza wins, Squigly and Leviathan retreats. She then runs into Ms. Fortune, and after learning she swallowed the Life Gem, which Cerebella was after to return to the Medicis, Eliza decides to keep Ms. Fortune for herself to serve as her new blood fountain.

At this point she doublecrosses the Medicis and confronts Cerebella. After defeating Cerebella, Eliza kills her and goes after the Skullgirl herself. Arriving at the Grand Cathedral, she meets Filia. Recognizing Samson, Filia's parasite, Eliza also offers him to join her side, but he blames her for the death of his original host and for making the world prejudiced against them. After Eliza defeats them they also retreat, so she goes to the catacombs below, where she confronts Marie, the current Skullgirl.

Eliza defeats the Skullgirl, but the Skull Heart addresses her as the Crimson Scourge. She is then suddenly attacked by Double, who calls revenge on her for killing her two daughters, Aeon and Venus. Recognizing Double is Queen Lamia, Eliza attempts to flee, while her two bodyguards block the rampaging Double. She then notices the existence of Gehenna, the place below the catacombs where Double digested her victims, so she drops to the place and calls Albus and Horace to follow her. Eliza uses the pool of blood in the place to restore herself and confront Double, defeating her, after which she destroys the Skull Heart and escapes the place.

Returning to her palace, she is attacked by both Filia and Squigly. Drawing from her pool of blood, she defeats both of them, entombing Squigly to serve as an alarm for when the next Skullgirl arrives and trapping Filia, intending to kill her once she finds a more suitable host for Samson. Deciding it is time to reclaim her place as queen of the world, she draws all the blood she accumulated and creates a gigantic monster construct, going after the Medicis to show the world her true power.

After the credits, she is stopped by Marie, who is somehow still alive.

It is interesting to note that, unlike other parasite hosts, Eliza and Sekhmet both act as a singular individual. This is presumably due to Eliza's extremely long life, which allowed her to synchronize with Sekhmet to a far greater extent than most Parasite users. It is unknown whether one of the two suppressed the other's personality over time or whether their minds have truly fused into one.

Eliza is a ruthless person, with no empathy for others and no sense of compassion. She shows absolutely no remorse for raiding "charitable" blood drives for food, and will not hesitate to destroy anyone who stands in her way. Eliza is very selfish and pragmatic, and has zero qualms about using people any way that benefits her, even if it means subjecting them to a fate worse than death, such as keeping the nigh-immortal Ms. Fortune in chains forever as her personal reusable bloodbag. She is sadistic and blootthirsty, and once the Medicis force her out of "retirement", remarks how good it feels to finally be fighting and killing again.

Eliza is also unfathomably arrogant. She views herself as a goddess and desires to be worshiped. Even when she tries to keep a "low profile", she lives like a queen. Being the famous diva she is, she loves flaunting her wealth, riding around in a custom limousine and parading a huge collection of expensive-looking clothes (though it's implied those are usually formed out of her own blood). Living the life of a mere celebrity is not enough for Eliza, though - she will not be satisfied until the entire world is groveling beneath the feet of its rightful god-empress. Her pride also shows when she battles, as she enjoys showing off her power and belittling her opponents.

Due to her arrogance and her immense power, Eliza is nearly always cool and collected. Neither the Medicis' attempt to blackmail her nor an attack by two Parasite users seems to faze her confidence whatsoever, the only being to even temporarily make her show a spec of fear being the powerful and eldritch Double.

Despite her villainous traits, she shows displease at how parasites are treated by society, believing they deserve to be the true rulers of the world. She also never abuses her bodyguards and treats them with respect, although when her life was threatened she did not hesitate to escape before them.

Eliza hosts the skeletal Parasite Sekhmet, which grants her the power to manipulate blood at the cost of having to feed on blood to survive and maintain her power. Unlike most Parasites, Sekhmet is completely internalized, acting as Eliza's skeleton. Very little remains of Eliza herself, aside from her eyes and a few organs, most of her being a construct of blood taken from others and organized around Sekhmet. Over hundreds of years, Eliza has developed a perfect synchronization with her Parasite, allowing her to perform feats far beyond the realm of possibility for most Parasite hosts. When attacked by two Parasite hosts at once, Squigly and Filia, she manages to defeat both. She also managed to defeat Double, a divine being, by herself, although she was only able to do so by feeding on the blood in Double's own realm, Gehenna. She has killed The Trinity in the past, although it is unclear whether they were already divine at that point.

Eliza's power, granted by Sekhmet, lies in the manipulation of blood to suit her whims. She can manipulate the shape, color and hardness of blood, being even able to form anything from clothes to weapons. Over hundreds of years, Eliza has refined fighting to an art form, shaping her body and blood into many shapes (animals, people, sigils) that harken back to the myths of her distant homeland. She can even sprout blood wings that allow her to fly. It is not unclear how much blood she can use at will in her normal form. When she uses some attacks, Sekhmet becomes exposed, implying that she can only use a finite amount of blood at once. However, in at least one attack she creates an entire small boat out of blood, without exposing Sekhmet whatsoever, which implies that she can unleash far more blood than her body would seem to contain.

She also uses a weapon known as the Staff of Ra. This weapon, typically used by Eliza as a microphone stand, is actually a double-bladed golden scythe. Upon being swung, it generates trails of fire, as seen in Eliza's Solar Arc attack, it can also generate a massive ball of fire from its tip, as shown when Eliza uses her level 3 special, Khepri Sun.

By anchoring her blood and remaining organs to the Staff of Ra in place of a skeleton, Eliza can also send out Sekhmet bursting out of her body to attack the opponent. Sekhmet is incredibly durable (moreso than Eliza) and almost completely inured to pain, being able to take most conventional attacks without flinching. Sekhmet shares Eliza's blood manipulation, but unlike Eliza, who usually shapes her blood into whimsical figures, Sekhmet seems to usually prefer conventional Ancient Egyptian-styled melee weapons or its own claws, and attacks with feral savagery, mauling foes with dozens of attacks before they have the time to blink. However, Sekhmet can only spend a very limited amount of time without being submerged in blood.

Eliza can assimilate and manipulate any blood she comes in contact with, regardless of blood type and seemingly regardless of species, healing herself in the process. In this way, she can regrow a lost limb in seconds. As long as she has access to a sufficient amount of blood in contact with her, she can perform feats that are nothing short of godlike. She was seen creating a building-sized blood construct that she was able to pilot as an extension of her own body, with presumably the same capacities she regularly has, but on a much grander scale.

Additionally, she is almost never seen without her bodyguards, Albus and Horace, who assist her in battle. Horace is able to jump great heights to divekick Eliza's foes, while Albus can burrow into the earth to surprise them from below. 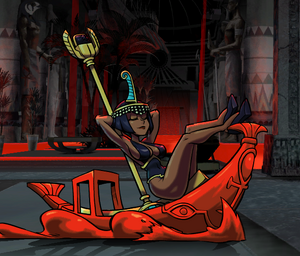 Eliza in a blood boat. 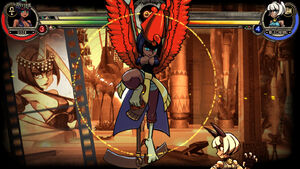 Eliza changing shape, to what looks like an Harpy. 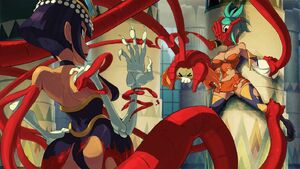 Eliza catching Cerebella and tearing Vice-Versa from his power. 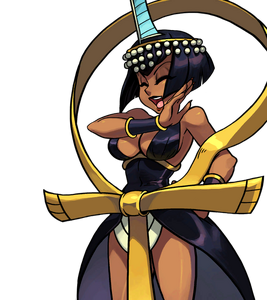 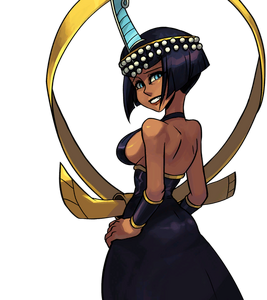 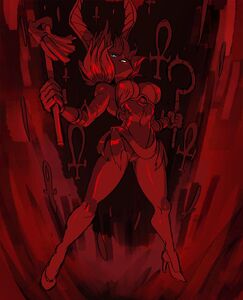 Eliza absorbing all the blood from Gehena. 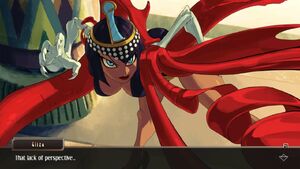 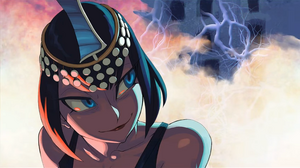 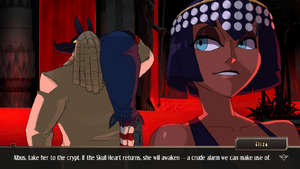 Eliza ordering Albus to lock Squigly in the catacombs.
Add a photo to this gallery

Retrieved from "https://villains.fandom.com/wiki/Eliza_(Skullgirls)?oldid=3698025"
Community content is available under CC-BY-SA unless otherwise noted.