Elizabeth Ferguson is the secondary villainess from "Who's There?", episode 8.11 of CSI: NY.

She was portrayed by Sandra Hess.

Elizabeth Ferguson is the wife of real estate mogul Ron Ferguson; however, the couple was planning to divorce. As it turned out, Elizabeth former would be left with nothing in a divorce, mainly due Ron moving his money around so she couldn't get it. In an attempt to gain an edge in the divorce, Elizabeth created a fake account and posed as a woman named Eva Hutton (who was later revealed to be real) to make it appear that Ron was being unfaithful to her. This was followed by a reply to Ron stating that he would "get rid of her (Elizabeth) for good."

The episode began with Elizabeth and Ron dining together when they heard a knock at the door, with Elizabeth opening the front door and seeing a pair of masked robbers. The robbers - one of them being the couple's daughter named Megan Ferguson, unbeknownst to the couple - entered the home and tied up the couple, with Elizabeth being gagged by her villainous daughter. The pair escaped after the other robber -Megan's lover, Mark Johnston - knocked out Ron during his own escape attempt.

Ron was still alive, but he was severely bloodied and beaten, prompting Elizabeth to take out Ron's phone to begin the process of dialing 911. However, instead of doing so, Elizabeth turned heel and smothered her husband to death, committing the murder by moving towards Ron and covering his mouth with her right shoulder. The murder was Elizabeth's opportunity to avoid a messy divorce, with the planned result seeing Elizabeth (most likely) inheriting her husband's wealth. Elizabeth masked her heel persona by acting as a grieving widow once Mac Taylor interviewed her at the scene, and acted shocked at the realization that Ron was having an affair, due to the profile she created. Due to Ron's message, Mac informed Elizabeth that he was planning to kill her, but everything would be revealed following Megan's interrogation and arrest for her role in the robbery.

After Elizabeth expressed shock over her daughter's involvement in the robbery, Mac asked her if she had anything to add. When Elizabeth said nothing, Mac expressed his own shock over her allowing Megan to take the fall for a murder that Elizabeth committed herself. After denying the claims, Mac informed Elizabeth that the fibers on her shirt were found on Ron's body, linking her to the murder, At that moment, the evil Elizabeth boldly confessed, stating that Ron was leaving her and Megan with nothing, and that he was trying to kill her. However, Mac revealed to Elizabeth that Ron knew all along that "Eva" was Elizabeth, and he left the message as a joke, making her crying. Following her confession, Elizabeth was eventually arrested (off-screen) for killing her husband. 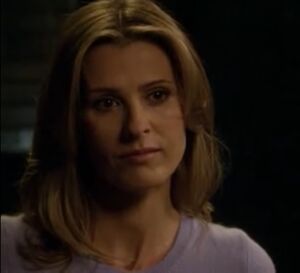 Retrieved from "https://villains.fandom.com/wiki/Elizabeth_Ferguson?oldid=3845333"
Community content is available under CC-BY-SA unless otherwise noted.