Filming herself and her encounters with the Slender Man.

To spread the Slender Man's Infection.

Kill her friends for the Slender Man.

Ellie is the protagonist villain and also the main antagonist in the OneHundredYardStare Slender/ARG series.

Ellie had been infected with Slender-Sickness for a long time prior to the events of OneHundredYardStare.

Initially, Ellie and her friend, Chris, would film mediocre video projects in the woods near their house. Eventually, they were stalked by the Slender Man, eventually leading to the two of them hiding out in her cabin from him. Eventually, Chris turns violent and seemingly dies immediately afterwards.

At the start of the series, Ellie infected her friends, Avery and Macy. It's later implicated that this was purposely done. Afterwards, Ellie demands that Macy and Avery record everything they do. Throughout the following series of events, Ellie laughs at the psychological torture the girls go through afterwards. Once the Anti-Body explains how he wants to stop the spread of the infection, he confronts Ellie for purposely posting the videos on YouTube.

Ellie explains why she posted the videos to the viewers in Eighteen, before psychotically laughing toward the camera and apologizing in a distorted voice.

Some while later, Ellie abandons the group and runs off into the woods, where she camps out and documents herself for a short while. The Anti-Body confronts her and tries to get her to come back with the rest of the group. He then mentions her boyfriend, Chris, and how he is dead "even if his body is still alive." Ellie calmly replies that he isn't. The Anti-Body giver her a gun to protect herself. Afterwards, Ellie becomes overwhelmingly hysterical and contemplates suicide. She then kills the Anti-Body when the Slender Man shows up, and proceeds to run out into the woods.

Bowie chases after Ellie wanting to help her. They are teleported to an open field within the woods where Ellie holds a gun to her head. Bowie tries to calm her down, only to be shot in the chest. As Ellie admits that she wouldn't have killed herself, Bowie comes to the realization that she's been helping the Slender Man. While it seems Ellie has won, Bowie grabs the camera and states, "Not today, bitch!" A gunshot is heard. Whether or not this was Ellie dying is currently unknown.

Thirty Seven implicates that Ellie is still alive, when her laugh is heard at the end of the video. 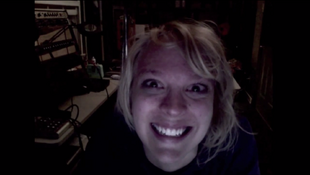 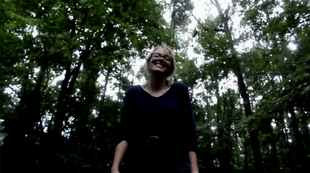 Ellie after shooting Bowie.
Add a photo to this gallery 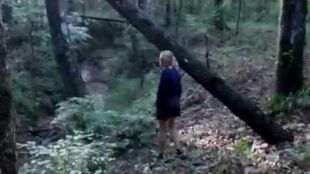 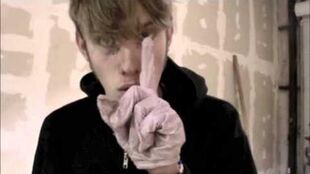 Eighteen
Add a photo to this gallery

Retrieved from "https://villains.fandom.com/wiki/Ellie?oldid=3626841"
Community content is available under CC-BY-SA unless otherwise noted.