Ellie (The Last of Us)

The Last of Us

Student of The FEDRA

Telling jokes from her joke book.
Writing in her journal.
Playing the guitar.

Reach the Fireflies so they can create a cure (failed).

Survive and live a full life with Joel Miller (partially succeeded).
Avenge Joel by killing Abby Anderson (formerly, but succeeded by beating her up instead of killing her).

Despite being an anti-hero, she becomes more villainous in the sequel where she is blinded by revenge and uses extreme methods of violence against her enemies, leading to her accidentally killing a pregnant woman and threatening to kill Lev, an innocent child.

She is voiced and motion captured by Ashley Johnson in the English version of the game, and by Gea Riva in the Italian version.

Ellie is very skilled with knives and guns despite not being granted one until she saved Joel from a Hunter. She is also quite good at tracking and hunting as she was able to shoot a rabbit during Winter presumably from a far distance and managed to land a few good shots on a deer she was tracking. She is also a very good marksman, being able to snipe for Joel while he cleared a path of Hunters. Ellie is an equally skilled craftsmen as Joel, being able to create Medical Kits, Molotovs and Nail Bombs.

She is also immune to the Infection as such spores or bites don't affect her. It's also revealed that Ellie knows how to work a car and is adept at horse-riding, being able to ride away from Joel and Tommy's dam by herself. She excels at stealth as well. An example of which was when she was able to creep up on a Hunter while he was attempting to drown Joel and shoot him, although this could because the Hunter didn't notice her because he was too focused on drowning Joel.

Though she is an equally adept survivor as Joel, her age, size and strength prevents her from physically fighting a human or Infected and has to slash with her knife. She can also be ambushed, tracked or knocked out. An example is when a group of cannibals located her back to her hold by following the horse tracks, being locked in a chokehold by David and tracked yet again by the latter.

Having been raised in an environment where modern standards and values have deteriorated, Ellie is considerably as a rash, impulsive, coarse and temperamental girl, and isn't fazed by the notion of using violence as a means to an end or profanity as a way of expressing how she feels. However, she manages to maintain a particular innocence as she has yet to see the darkest sides of human nature and retains a palpable trust in people. This serves as the juxtaposition to Joel's wary, morose outlook on post-pandemic life. She apologized to the soldier scanning her for stabbing him and hoped to prevent him and Ramirez from harming her with non-lethal means.

Ellie is also perceptibly clever and witty, and will do whatever it takes to keep Joel and herself alive. She takes orders from Joel, but all the while makes it clear she does not "need any babysitting at all."

Ellie is enthusiastic about the outside world, given her confinement to her quarantine zone during her childhood. She is obsessed with things she collects from others, illustrated through her interest in music, movies, books, and video games. She frequently remarks her amusement upon finding interesting collectibles throughout her trip, which often clashes with Joel's physical indifference. Ellie begins to learn about the world before the Cordyceps brain infection due to the oddities she finds and from Joel. She is is amazed by the trivial matters that people were concerned with, specifically females, before the apocalypse such as boys and what shirt goes with which skirt.

Ellie seems to adhere to no religion, as seen when she claims that she goes "back and forth" when asked by Sam if she believes in an afterlife. She says that she would like to believe it, but admits "I … guess not."

Ellie also suffers from a case of monophobia (fear of being alone) and states to Sam that she fears losing others she cares about such as Joel. The cause of this case is possibly related to her estranged parents and the deaths of her best friend, Riley, and hired guardian, Tess. Coincidentally, both were victims of the fungus and both had gotten infected while in her company. Soon after admitting her fear to him, Sam joins the list.

Ellie showed difficulties in positioning herself as a young kid in an adult's eyes, and sometimes even tends to "supervise" adults. She also takes "justice" into her own hands on her relationship with anyone, and does not think she requires any adults' consent. This self-parenting trait is related to her time spent in an orphanage, where she had learned to fend for herself. An example is when Joel falls on an iron rod. Though not shown, she takes Joel (by horse) to an abandoned mall in order to find supplies to stitch his wound up. Afterwards she takes him to an abandoned house on a pulley attached to her horse and continues to nurse him back to health, while at the same time getting them food, and medicine from David. 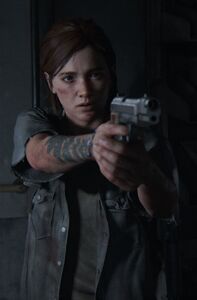