Zombify her family via the dark powers of the Pet Sematary (succeeded).

She was portrayed by Jeté Laurence.

After the Creed family had moved to Ludlow, Maine, to get away from the city life of Boston, Massachusetts, Ellie discovers the eponymous Pet Sematary after she saw some masked children carrying a deceased dog presumably to bury it. She then meets and befriends Jud Crandall before introducing him to the rest of her family. With her discovery of the Pet Sematary still lurking in her mind, Louis and Rachel Creed try to use this opportunity to discuss death as being a natural part of life without much results. On Halloween, Jud calls Louis over to show him the mangled body of Ellie's pet cat named Church.

Not wanting Ellie to be hurt by it, Jud tells Louis to meet him at the cemetery that night. When Louis arrives, Jud forces him to follow him past the border of the cemetery to an ancient burial ground believed to be haunted by a Wendigo. Church is buried that night and much to Louis's amazement, Church returns the next morning as a zombie cat. However, Church was more vicious and aggressive, leading to Ellie to desiring to sleep by herself. Failing to euthanizing Church, Louis instead releases Church on the highway and returns home to inform Ellie that he had run away.

On Ellie's birthday, Church returns to the house spurring Ellie to run towards the road followed by Gage. Unbeknownst to her, a tanker was speeding down the road. The driver manages to stop, but its tank loosens from the truck, killing Ellie upon impact instead of Gage. The family is devastated by the accidental death, so much so, Louis drugs Jud's drink to buy him enough time to dig up his daughter's coffin and then burying her in the ancient burial ground. Ellie is brought back from the dead as a zombie, but she no longer has her initial personality, instead being cold. Despite this, Louis tries to make it work, acting as if nothing had happened prior. Jud realizes what Louis had done and attempts to kill the zombified Ellie. Unfortunately, Jud gets distracted by Church which gives Ellie the opportunity to slice through one of his Achilles' tendons. Ellie momentarily morphs into Jud's late wife as a means of breaking him further before finishing him off.

Rachel and Gage return to Ludlow fearing for the worse. When she is reunited with her zombie daughter, Rachel quickly takes Gage and runs to the bedroom. As Louis was trying to convince his wife that Ellie was still their little girl, he escapes to Jud's house for assistance only to find his lifeless body. Ellie tries to break into the barricaded room provoking Rachel to take Gage and attempt to escape through the bathroom window. After successfully getting Louis to catch Gage, Rachel is stabbed to death by Ellie. Before succumbing to her wounds, Rachel insists Louis to not bury her in the Pet Sematary. Knocking her father unconscious, Ellie buries her mother having anticipated that her father would try to kill her again. Louis comes around and runs for the deadfall at the Pet Semetary. Ellie ambushes him and they engage in a frenzied brawl in which Louis is mortally injured, however Louis comes close to decapitating his zombie daughter with a shovel, but he is killed by having a weather vane impaled into him by a zombified Rachel. The film concludes with the zombified Creed family motioning for Gage to open the door to the family car implying that he would be killed next and buried. 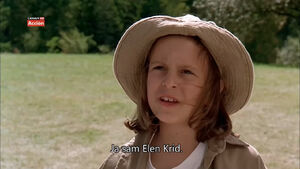 Ellie when she was still alive. 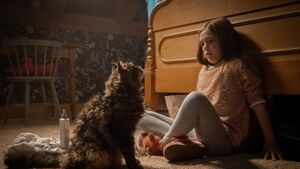 Ellie with a resurrected Church. 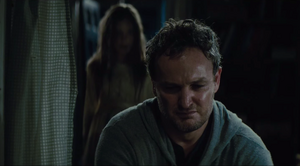 A reanimated Ellie behind her father. 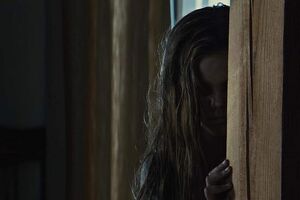 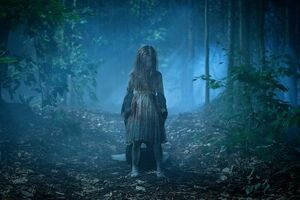 Ellie at the burial ground.
Add a photo to this gallery 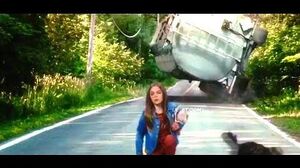 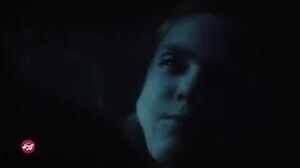 Pet Sematary 2019 ending scene
Add a photo to this gallery

Retrieved from "https://villains.fandom.com/wiki/Ellie_Creed?oldid=3576906"
Community content is available under CC-BY-SA unless otherwise noted.