Continue his counterfeit smuggling racket with no interference.

He is a former cop turned corrupt director of security for the popular family theme park Wonder World, which he secretly uses to print counterfeit dollar bills. He was also Jon Flint's friend until his betrayal when he framed the shooting of Uncle Dave Thornton on Billy Rosewood's and as well former and retired Sgt. Taggart's partner Axel Foley.

He was portrayed by Timothy Carhart.

Ellis DeWald was revealed to be a cop in an unknown police department, but somewhere along the line, he left and became corrupt, using his knowledge for evil purposes.

He became the head of security for a famous theme park named Wonder World and used it as the perfect cover up to manufacture counterfeit dollar bills and smuggle them around the country with the help of his henchmen, corrupt park manager Orrin Sanderson and also corrupt Secret Service agent Steve Fulbright. He also became friends with unsuspecting Beverly Hills police officer Jon Flint.

It is possible that he also killed park designer and close friend of Wonder World creator Uncle Dave Thornton, Roger Fry after he found out about his scheme.

He went with a few of his men to Detroit, Michigan to an illegal chop shop to acquire a van filled with mint paper that was used to make the notes.

After being shown the van and its contents, he double-crossed the workmen who had been promised payment for their service by ordering his men to shoot them all in cold blood to leave no witnesses.

However when a team of police officers led by Alex Foley who had come to the chop shop to arrest the workman got involved, a massive shoot out took place resulting in one of men being shot and in turn DeWald shooting police chief Douglas Todd who was also Axel's boss.

Axel saw his face and chased after him after some encouragement from his boss with no success thanks to DeWald tipping off Fulbright to stop him.

Axel followed him to Wonder World after his men had carelessly left behind evidence of Wonder World engraved towels. He sent his men to capture him, but Axel escaped.

After a frightening experience on the malfunctioning Spider ride, which Axel saved two children, DeWald's men caught him and brought him to the corrupt businessman.

Axel recognized him at once, but Jon Flint who had just arrived, refused to believe Axel's story since they were old friends. Axel was led away and DeWald told Flint to keep Axel way from the park.

Determined to prove that DeWald was a liar, Axel decided to turn up at Dewald's Man of the Year celebration dinner where he was receiving an award for community service to trick him into revealing his true colors. Axel along with police officer Billy Rosewood arrived and Axel openly went up on stage and revealed in front of the crowd that he would pay back Dewald everything that was owed to him with interest (cleverly disguising the fact that he was really going to avenge his boss that DeWald had killed). DeWald in turn as they both began putting on false smiles, replied: "What's the matter Foley? You mad at me for shooting your boyfriend?" Hearing this, Axel punched DeWald in the face in a rage before being dragged away by DeWald's men and arrested along with Rosewood for disturbing the peace.

Knowing Axel was now onto him, DeWald put all his men on alert to capture Axel if they should see him. However Axel disguised himself as one of the Wonder World mascots Okey Dokey and infiltrated the main room where the counterfeit operation was taking place. DeWald however, noticed Axel's reflection in one of the glass lights and sent his men to capture him, but Axel once again escaped.

DeWald's men chased him and not wanting to put anyone in danger, Axel fired his gun in the air, placed it on the ground and surrendered. DeWald's men then took him away and Axel tried to convince Rosewood and Flint about the counterfeiting. DeWald and Sanderson willingly took them to the room, but had craftily hidden the counterfeit bills and replaced them with currency that would be used for the theme park, so once again Axel's story was unconvincing.

DeWald later found out that he had contacted Uncle Dave and that Roger Fry had left behind some evidence that linked him to his crimes. It seemed like a blank note with only the words: "This is important, life and death. Roger." However it turned out to be a piece of mint paper that Roger had apparently managed to retrieve before his death and had given to Uncle Dave as well as another employee named Janice Perkins who was helping Axel with the case.

DeWald then shot Uncle Dave with Axel's own gun that he had confiscated from him earlier and proceeded to take the mint paper away from him, but Axel managed to hold DeWald at gunpoint in time to snatch back the mint paper and drive Uncle Dave to hospital.

DeWald then framed Axel for the murder of Uncle Dave by broadcasting it on the news and then went back to the park where he took Janice hostage. When Axel phoned, DeWald told him to meet him at the park, alone and unarmed. His terms were the mint paper for Janice's life.

Axel accepted and after he arrived, he was taken to the control room to see him. When Axel refuses to hand the mint paper over, DeWald threatens to kill them both, therefore making the paper useless.

Declaring to Sanderson who was holding Janice that he knows how cops think, threatens Axel into giving him the car keys as he knows that the note is hidden in the car. Axel holds up a key chain and presses a button that gives out a blinding flash, stunning DeWald long enough to grab his gun and tell DeWald's chief guard to drop his weapon. Suddenly Rosewood who had been told before hand of Axel's intentions, appears and a massive fight and shootout takes place with the park attractions malfunctioning, Rosewood and Janice being trapped in a sealed room with a safety precaution cooling system and Axel escaping. He locks the crooks in by smashing the security lock.

After a warning from Sanderson that Axel was using an outside line to get help, DeWald shoots the phone lines, leaving Axel to fend for himself. He then sends out an alert to get Foley before his chief guard opens the door and they set off after the cop, while Sanderson is gunned down for some unknown reason by Fulbright (who is later gunned down himself by Axel).

Rosewood and Janice manage to escape and Rosewood goes off to join Axel while Janice goes to find the police.

After more of his men are killed by Axel, Rosewood and also by Flint (who was informed by a fireman that Axel Foley shot Uncle Dave not knowing it was DeWald who was the real culprit), DeWald and the chief guard follow Axel to the Land of the Dinosaurs attraction.

Axel manages to gun down the chief guard and DeWald suddenly appears and shoots Axel in the arm. Axel then creeps up behind him and knocks the gun out of his hand. They fight with DeWald bashing Axel's head against the side of the cart that he was riding in, leaving a nasty gash on his forehead. He then tries to kick Axel hard in the chest, but the cop grabs his leg and knees him in the crotch. Axel then kicks him off the cart and leaps on him, giving him a thrashing to the chest and face. DeWald finds his gun and dazedly shoots Axel one last time. The bullet lands on the cop's leg but Axel retrieves the machine gun left by DeWald's chief guard and opens fire on him. The bullets tear through DeWald's body and the impact throws him into the back of another cart that is just passing by. Axel watches DeWald's lifeless body being carried away by the cart, pleased that his boss was finally avenged. Axel, Billy and Jon are all injured from fighting DeWald and his men, but are still alive and together they joke about what will happen when the theme park opens again.

DeWald's smuggling scheme was now put to an end once and for all. Uncle Dave had made a full recovery, Axel was cleared of the murder charge and proclaimed as hero for bringing the traitor DeWald to justice and saving Dave’s life, having a new Wonder World character named after him in his honor: "Axel Fox" and the Beverly Civilians and police also realized that it was DeWald who did really shot Uncle Dave, not Foley.

It's implied all of the Beverly Hills civilians consider Dewald to be a disgrace and his public for his heinous crimes as well shooting Uncle Dave Thornton.

DeWald was ruthless, calm, calculating, greedy and extremely cruel. He also appears to be diabolically clever as he puts on a charade of being a good and honest man who serves the community faithfully with no one realizing who he really is.

Dewald is also revealed to be sadistic as he openly mocked Axel when he came up on stage to confront him that he was not sorry for shooting his boss and later after he threatened to harm someone if Axel didn't cooperate that it wouldn't be the first time he had killed someone close to him.

He is also a double-crosser, as he murdered the workmen who had given him good service and pushed his own man out of the van after being injured during a shootout.

He also deceived the entire Beverly Hills Police force to arrest Axel for shooting Uncle Dave Thornton, but this backfired when a recuperated Uncle Dave cleared these false accusations and exposes him as the true shooter. 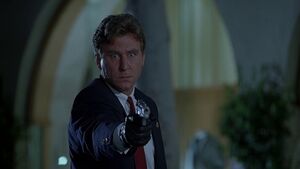 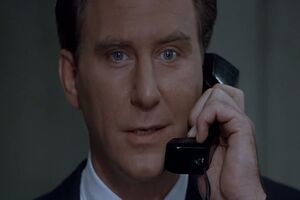 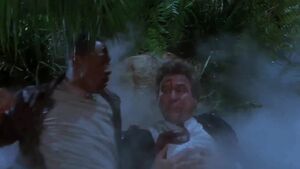 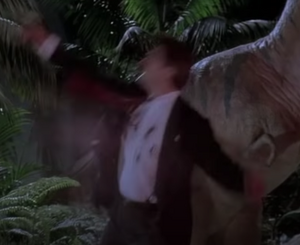