Animal Inmates
The Elmore Prisoners are recurring characters in The Amazing World Of Gumball, they were first seen in The Finale. They are a group of criminals. 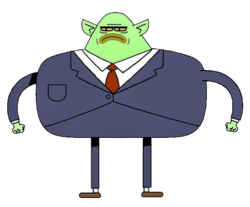 Goblin is a supporting character in The Amazing World Of Gumball, He is a serious man with a cruel nature. He is the current CEO of Channax Inc. Headquarters after the death of Mr Channax in "The Boss".

He is voiced by Alex Jordan and Kerry Shale. 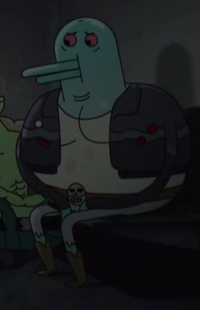 Dolphin Man is a background character in the show, he is shown to be very rude and obnoxious towards others.

He is voiced by Stefan Aston Frank.

Spary Paint Bottle is a background character on the show, he is very polite and soft-spoken.

He is voiced by Teresa Gallagher and Hugo Harold-Harrison.

Butterknife is a background character in the show, he speaks with a British accent.

He is voiced by guest star Matt Hargreaves