Squeezing animals to near asphyxiation.

Capture any cute and adorable animal to make them her pets (ongoing).

She was voiced by Cree Summer, who also voiced Hyena in Disney's Gargoyles, Mercy Graves in Superman: Doomsday, Blackarachnia in Transformers: Animated, Cree Lincoln in Codename: Kids Next Door, Granny May in WordGirl, Penny Gadget in Nostalgia Critic, Medusa in Kid Icarus: Uprising, Frightwig in Ben 10, Valerie Gray in Danny Phantom, Tiff and Vexus in My Life as a Teenage Robot, Dr. Penelope Young in Batman: Arkham Asylum, Haggar in Voltron: Legendary Defender, The Little Girl in Robot Chicken, Dr. Frakes in Amphibia, and Catwoman in DC Super Hero Girls.

She is an unintentional villain in the fact her crazed affection for animals leads her to capture them to keep as pets (often against their will), as he has no clue how to look after them and as such often causes them more suffering than good.

Her mentor at Acme Looniversity is Elmer Fudd and she is in many ways a female version of him, though she hunts animals down out of misplaced affection rather than for sport. Elmyra also has manic affection for the other villain in Tiny Toon Adventures known as Montana Max.

Though for some reason when Elmyra became a character in Pinky, Elmyra and the Brain she lost her apparent love for Montana Max (though by this time she had also apparently lost most of her connections with the Tiny Toons crew and was raising Pinky and the Brain as pets).

Although Elmyra is usually a recurring villain, in the "Can't Buy Me Love" segment of "Fox Trot", she is the main protagonist.

In most of her incarnations, Elmyra is a simple-minded child, who hurts animals due to not knowing her own strength and not through direct malice. As The Baroness in Toonenstein though she is re-imagined in a much darker, cunning and intentionally sadistic manner. 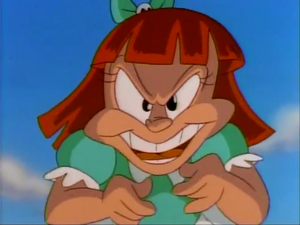 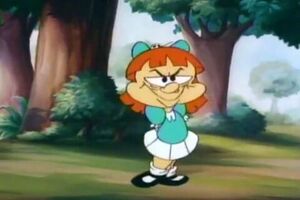