Elsa is an antagonist from the comedic parody song "After Ever After 2" by Jon Cozart. It features Disney princesses singing about how bad things went after their "happily ever afters". In Elsa's case, she became obsessed with both power and the preservation of the environment, leading to a terrorist dictatorship resulting in a Nazi-like world conquest scheme.

After the events of Frozen, Elsa began to notice the climate change and how it was affecting her kingdom. Since the kingdom mainly relied on the ice industry, things began to get tougher as the ice melted and did not freeze back up. Elsa began working to restore the industry, deciding to use her authoritative and magical powers to begin ruling with an iron fist, allowing her to begin a conquest to take over the world and restore it to the cold world she desired.

After teaming with Germany (presumably the remaining Nazi supporters) and Russia, Elsa began a worldwide conquest to kill those that opposed her. She freed all the penguins (who presumably helped her) and threw people into zoos. She built an army of snowmen, which she used to invade and attack people. She targeted conservative media and sent an unknown amount of people to concentration camps.

It is unknown if her conquest succeeded, as the song ends as she is still conquering and has yet to be stopped.

In this version, Elsa is a cold and cruel tyrant who thrives on the pain and suffering of the innocent and guilty alike. Though she does want to save the environment and reduce climate change, she is doing it for more selfish reasons associated with the financial strength of her kingdom. She is determined and violent, not hesitating to kill or imprison anyone who stands against her. 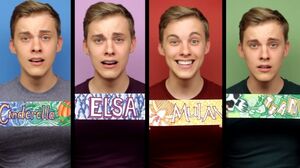 Elsa with Cinderella, Mulan, and Tiana.
Add a photo to this gallery 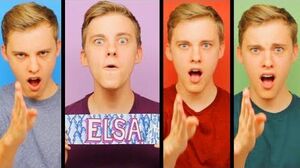 After Ever After 2 - DISNEY PARODY
Add a photo to this gallery
Retrieved from "https://villains.fandom.com/wiki/Elsa_(After_Ever_After)?oldid=3524926"
Community content is available under CC-BY-SA unless otherwise noted.