Help the Dino Rangers to defeat Mesogog and Zeltrax (Succeeded).

Minion
Elsa is the secondary antagonist of Power Rangers: Dino Thunder. She is Mesogog's minion who helps him to bring the dinosaurs back from extinction. She is also known as Principal Randall the principal of the Ranger's school. She is the (former) archenemy of Kira Ford the Yellow Dino Ranger.

In the season finale, she is betrayed by Mesogog and is stripped of her powers. She later helps Rangers defeat Zeltrax and Mesogog.

She was portrayed by Miriama Smith.

Elsa is capable of projecting powerful streams of energy from her sword and possesses incredible martial arts techniques.

For much of the early part of the series, she pretended to be Principal Randall, the head of the high school in Reefside, California where the Dino Thunder Power Rangers go to school (or, in the case of Tommy Oliver, work). Mesogog put her there to spy on the rangers without fear of getting caught, but she had fun while she was there by making the high school experience as miserable as possible for the students. Principal Randall is a little suspicious of why Dr. Oliver is working as a science teacher at Reefside. She enjoys prowling the grounds and looking for students to send to detention, similar to Mr. Caplan's running gag of putting Farkas Bulkmeier and Eugene Skullovitch in detention, and at one time the original Rangers. Meanwhile, she tries to use her secret identity to complete her true mission for Mesogog.

Despite the fact that Kira mentioned in the second episode that Elsa looked "familiar," it was not until late in the season, when the entire school watched Randell and Tommy fighting that Ethan (being the brains of the ranger team) concluded that she was Elsa. The other rangers pitied themselves for not noticing it until Ethan cheered them up by comparing Elsa to Superman.

She gave the Rangers a hard time on their first day of classes.

She tried to get close to Dr. Oliver, in order to find a way to defeat him for Mesogog. She tried to trick the Rangers with a false Dino Egg and unleashed the DimetroZord on the city. The Rangers were able to reprogram the Zord to their side.

During the second half of the series, Elsa gave herself a new look with longer hair as Zeltrax had noticed.

When Zeltrax left Mesogog's forces, Elsa became his main general. She continued to come up with evil plans to take down the Rangers. Mesogog began to grow weary of her constant failures.

When Elsa had taken a card of a powerful monster named "Ruby Dragon" from Ethan James (Blue Ranger), she was exposed as the evil servant to Tommy, and to the entire school while fighting him outside of school.

Mesogog then decided to sacrifice the evil powers which he had granted to Elsa in order to help power his transmutation cannon. With that, she was reverted to a normal human form, with no memory of who she was as Elsa by the life-force extractor. The loss of her powers also meant she was good again. After that she helped the rangers by telling them all about Mesogog and his plans which helped them in succeeding in Trent's plan (White Ranger). Although she was then captured by Zeltrax because he wanted a hostage for his plan. However, Tommy and Kira saved her from Zeltrax and destroyed him. After that she went to the 2004 prom in Reefside High and danced with Anton Mercer. Also she became principal again but this time for good. 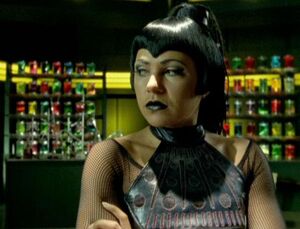 Retrieved from "https://villains.fandom.com/wiki/Elsa_(Power_Rangers)?oldid=3367811"
Community content is available under CC-BY-SA unless otherwise noted.