Elsa the Snow Queen (by some fans)

Get the Holy Grail by any means necessary (failed).

Dr. Elsa Schneider is the secondary antagonist of the 1989 action-adventure film Indiana Jones and the Last Crusade, the third installment of the Indiana Jones film series.

She is an Austrian art professor who desires the Grail, and like Walter Donovan, she keeps her involvement with the Nazis a secret. Unlike Jones' other two love interests in his previous adventures, Marion Ravenwood and Willie Scott, Elsa is an evil and conflicted woman. She is revealed to have seduced both Joneses throughout the film, Henry first and then Indiana. Elsa was also an ally of Indiana Jones first and last.

During the battle in Hatay, Elsa informed Donovan that Indy had escaped from their clutches. However, during Indiana's fight against Vogel, which resulted in the death of the latter, both Elsa and Donovan, along the Nazis, managed to find and get in the Temple of the Grail before the Joneses and their allies arrived. Indiana and company arrive, which allows Donovan to "persuade" Indiana to find it for them by shooting Henry Sr. Elsa is upset by Donovan's actions, but hangs back to follow Indiana through the three trials. Elsa was willfully insulted and threatened by Donovan. Once inside the chamber, Elsa tells Donovan to let her choose the true grail from the various fakes. She picks a fancy cup, knowing that it's a fake. Donovan, believing it to be the real one drinks from it and ages to death instantly. He shatters himself into shattered bones, turned into dust. Elsa then watches Indiana choose the true grail, and after Indiana heals his dad, Elsa tries to take the grail from the temple. Indiana warns her not to, but she crosses the magical seal anyways. The temple falls apart and Elsa drops the grail. She chases after it, but trips and knocks it into a crack in the ground. She nearly falls in too, but Indiana grabs her. Knowing the grail survived the fall, she tries to reach for it rather than giving Indiana both her hands. While she comes up just short of getting it, her other hand starts slipping from Indiana's hold because she's wearing leather gloves. Elsa keeps trying, despite Indiana's urgent warnings, when the glove on her hand comes off and she falls into the foggy chasm to her death, Henry later told Indy after they escaped the temple that Elsa never really believed in the Grail, but rather she thought she'd found a prize. 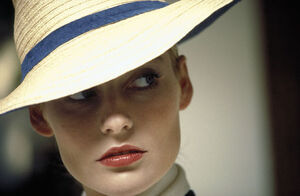 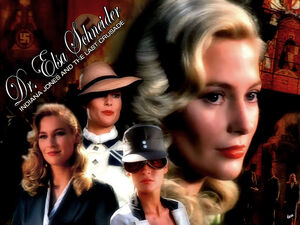 Elsa meeting with Walter Donovan in the Republic of Hatay. 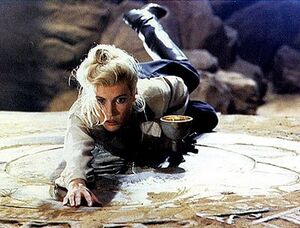 Elsa getting caught by Indy.

As she hangs over the chasm, being held by Indy, Elsa notices the grail is right below her.

Releasing one of her hands from Indy's grip, Elsa tries to retrieve the grail.

Ignoring Indy's warnings and pleads to give him her other hand, Elsa tries to reach the grail.

Elsa realizing too late that her one hand being held by Indy slips out of his grip due to her wearing gloves. 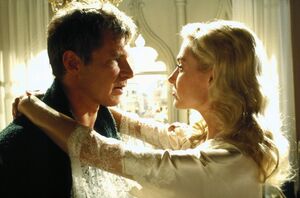 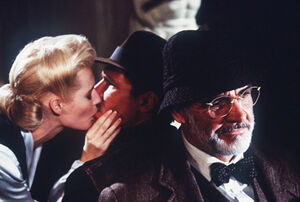 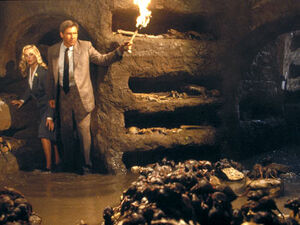