Soul Calibur (the sword itself)

Elysium (the soul of the sword)

Spirit of the sword Soul Caibur

Guiding the wielder of Soul Calibur.

Elysium is a major antagonist from the Soul Calibur series. She made her debut appearance in Soul Calibur V as one of the main antagonists and final boss in Story Mode. She is the spirit and will of Soul Calibur, just as Inferno is to Soul Edge.

Elysium is the entity that guides the wielder of the Soul Calibur.

In the Story Mode, she guided Patroklos Alexander on his journey to restore Soul Calibur. She wanted Patroklos to resurrect Soul Calibur, saying that with the maximum power of Soul Calibur, he would save his sister, Pyrrha Alexandra of the malfestation. This led Patroklos to get the other treasures, Kali-Yuga and Dvapara-Yuga, which were in the hands of Xiba and Yan Leixia respectively.

After the resurrection of Soul Calibur, Elysium appears saying that with this power, he could save Pyrrha and the world from the evils of Soul Edge and its wielder, making wielding Soul Calibur, and she says "Good boy, I'm so proud of you" and convincing him to kill his sister beside her. However, in the end, she revealed herself to be a manifestation that Patroklos created with Soul Calibur.

At Episode 20, Elysium brought Patroklos to the Utopia of the Blessed, and seeing that he was no longer able to defeat Soul Edge, she decided to use his body to destroy the new wielder of Soul Edge. However, Patroklos refused and defeated her in battle. As her body disintegrated and disappeared, Patroklos returned to the real world, saying, "Good-bye, Mother".

In Legendary Souls Mode, she is one of the characters fought, being the others Kilik, Nightmare, Siegfried Schtauffen, Inferno, Edge Master, and Algol. 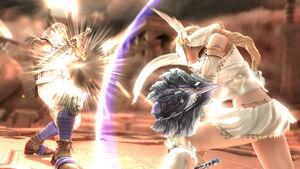 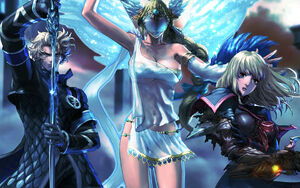