Be the Best Cook

He was voiced by John DiMaggio, who also famously voiced Bender in the same show.

He got his start when he was brought in to replace Helmut Spargle's less extreme show, Down-Home Country Cooking With Helmut Spargle. Elzar practices the dark side of cooking, utilizing things like cilantro, mango salsa, raspberry vinaigrette, along with liberal use of his spice weasel.

A Neptunian, Elzar lives in Little Neptune. He is cocky, arrogant, possessing a sharp tongue and a short temper. He is an excellent chef, though he has a reputation for being rude to the customers.

Bender briefly worked for Elzar, in order to pay for the meal Elzar served the Planet Express crew to make up for accidentally blinding Leela. 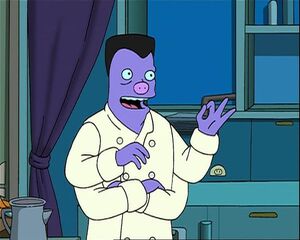 Retrieved from "https://villains.fandom.com/wiki/Elzar?oldid=3771802"
Community content is available under CC-BY-SA unless otherwise noted.