Make people remember her name, so that she can gain more then enough power to take over the world.(failed)

Ember McLain is an antagonist from the Nickelodeon animated television series Danny Phantom. Ember McLain is a hard-rocking ghost girl with a powerful techno-magical electric guitar who feeds off the idol worship of teenagers. Ember's appearance, songs, and character in general portray her as a ghostly embodiment of teenage rebellion and disobedience to authority figures.

She was voiced by Tara Strong, who also played Lena Dupree in Scooby-Doo on Zombie Island, and Princess Mandie in The Fairly Odd Parents.

Before she died, Ember was an unpopular high school-aged girl who had large dreams of becoming a rock star. One day a boy asked her out to the movies. She waited all night for him to show up, saying, "He's just running late." When morning came and he didn't show up, Ember went home. She was so exhausted that she fell asleep and didn't wake up when her house mysteriously caught on fire. She died in the fire, which possibly gave her the name "Ember." Her song "Remember" is most likely based on the above events prior to her death.

Making her debut in "Fanning the Flames" with her famous song "Remember", Ember used her abilities and pop star status to dominate the world, keeping Danny distracted by placing a love spell on him that makes him fall in love with Sam. It keeps him busy while Ember busies herself with her plans of world domination. However, the spell is later broken when Sam, in a desperate move, kisses Dash (to both of their disgust) right in front of Danny. Heartbroken and finally out of the spell, he fights Ember, but she is still way too powerful and traps him in a swirling purple vortex, due to people chanting her name. Danny realizes he needs to stop the chanting and gets Tucker Foley to sing on stage. His horrible singing causes the hypnotized crowd to wake up and stop cheering for Ember, whose powers and flaming hair then fizzle out to nothing as a result. She is captured and banished to the Ghost Zone by Danny, where she deals with an annoying Klemper. You know he's annoying her when she yells at him to "Stop saying my name!"

She later attempted to exit the Ghost Zone a few days later in the episode "13", where she was shown in a line heading directly through the Ghost Portal. Jack was idiotically pressing a button which opened the portal doors telling his family that whenever you press it, you open the doors "like this" so you shouldn't press it. Anyway, just as it was Ember's turn to exit the Ghost Zone, Johnny 13 alongside Kitty and Shadow cut in front of her on his motorcycle.

She made her second appearance as a main character in the episode "Pirate Radio" where Ember creates a song that adults get hypnotized by (actually a mellow, slower, ballad version of "Remember") so that they go to a fake cruise, called M. Bersback, a poorly hidden message for "Ember's back". With this, she teams up with Captain Youngblood and his undead pirate crew. However, she just leaves/escapes the ship, after she accidentally burns the ship's sail, vowing to return. Despite her involvement in the plot, she was not the primary villain of the episode.

She came back in "Reign Storm" with numerous ghosts who fled the Ghost Zone when Pariah Dark was woken up. Later in the same episode, she, along with Danny's other enemies, teamed up to help Danny fight off the Ghost King's army.

In "Identity Crisis", Danny, Sam, and Tucker check out Ember's file on Danny's computer hinting he might have fought with Ember before the beginning of the episode, since Danny mentioned sending her back to the Ghost Zone.

In an alternate future (seen in "The Ultimate Enemy"), Ember is overweight and can no longer sing due to her vocal cords being damaged by Dark Danny. She attacks regular Danny along with some of his enemies, wanting revenge for the terrible fate his future self gave them.

She makes a cameo in "The Fright Before Christmas" as one of the many ghosts helping Danny save Christmas.

In "Girls' Night Out", Ember teams up with Kitty and Spectra in a joint attempt to eliminate all men displaying Misandrist tendencies . This is the episode where her new song "Girl's Night Out" is played with Jazz as a backup singer (even though she wasn't very good at it). It is also revealed that Ember is Skulker's girlfriend (this was establish only for Ember to have something in common with Kitty and Spectra).

Ember's final appearance in the series was in the final episode, "Phantom Planet". She was seen with the many ghosts who helped Danny and Skulker turn the entire planet intangible, so that an asteroid can pass through it.

According to the series director Butch Hartman, Ember remains a continually recurring enemy of Danny in the ten years following her events of the series' final episode. As their encounters increase however, Ember develops a strong obsession with Danny to the point where she secretly develops feelings for him and only causes him trouble in order to get his attention.

Ember is a hard-rocking ghost teen with disrespect towards any kind of authority figure. She obviously has a great amount of pride in her singing abilities, as she wanted revenge on Dark Danny in "The Ultimate Enemy" for ruining her vocal cords. She also has somewhat of an enthusiastic and childish personality (whilst frequently shouting 1970's phrases such as "dipstick" and "babypop"). She shares her hatred of adult authority with Youngblood, and she is distressed when things don't go the way she wants ("Fanning the Flames").

She is not above revenge. In all the episodes, she was featured as a villain, she has either tried to hurt Danny and/or anyone who defeated/annoyed her in any sort of way. Ember also could get really low in her schemes when it comes to world conquest, as she has used her music to control people, whether it's only mind control or changing one's emotions. Despite being a dangerous enemy, she is not insane or murderous like other ghosts in the series (in fact, she could be considered nothing more than a influential teenager with her own "little" desires).

It is later revealed that in the ten years following “Phantom Planet”, Ember develops a deep obsession with Danny, which eventually develops into a strong yet strongly-secret crush on him, though she is unwilling to admit it to herself. Because of this, she changes the motivation for her hauntings and attacks from rebelling against authority to getting Danny’s attention. Her crush on Danny is recognizable to others as she has shaved his logo onto the back of her head and has it for the base of her guitar. Despite her obvious attraction she continues to staunchly and sometimes violently deny it.

Ember has long, flaming blue hair put into a ponytail at the top of her head held back, she has two locks of hair framing her face which look like a sharp-angled "M" and purple lipstick. Her clothing consists of a black choker around her neck, a black one-shouldered tank top exposing her midriff, one long glove that covers most of her right arm, and one black bracelet on her left arm. She also wears a pair of what appear to be leather pants with a silver belt and skull boots.

In Pirate Radio, she wore a huge pirate hat that has a music skull on it and a large purple cape with her flaming hair flowing down. 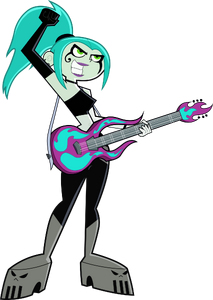 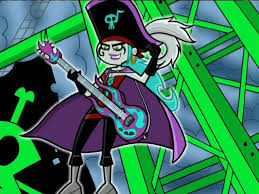 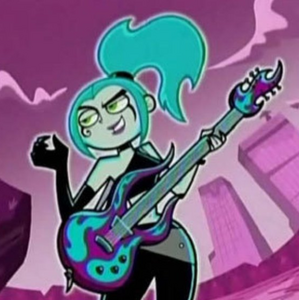 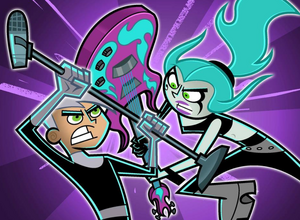 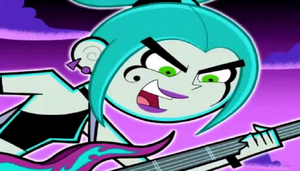 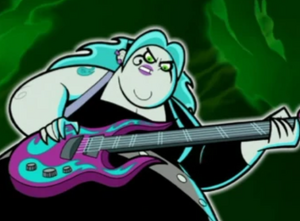 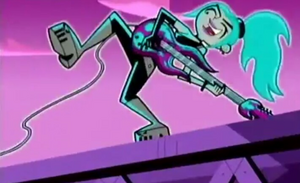 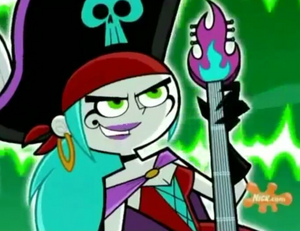 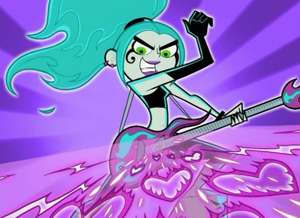 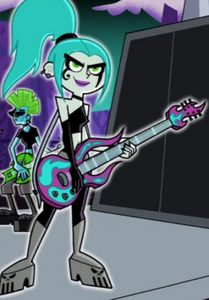 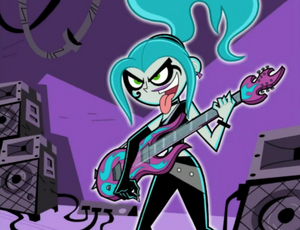 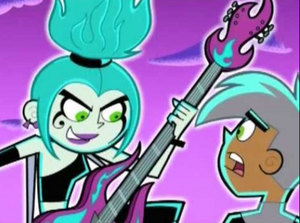 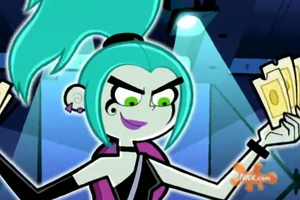 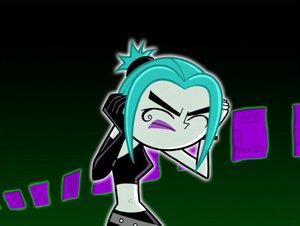 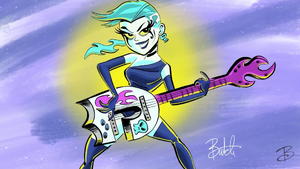 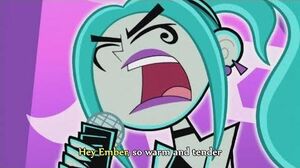