Villains Wiki
Register
Don't have an account?
Sign In
Advertisement
in: Aliens, On & Off, Star Wars Villains,
and 27 more

War helmet used both as shield and weapon

Tending to his pet Anooba.

Take jobs from either Republic or Separatists that will pay the most.

Neutral Bounty Hunter
Embo is a bounty hunter and an antagonist in the Star Wars universe, appearing in Star Wars The Clone Wars TV series.

He was voiced by Dave Filoni.

Embo is quite mysterious, does not speak the basic human language, is skilled in hand to hand combat and uses a bowcaster blaster and his disc-shaped metal hat in combat. He is also very agile and has showed to be able to pull off very ninja-esque moves and feats.

Embo first appears with a group of bounty hunters that were hired by farmers on the planet Felucia to protect them from the pirate Hondo Ohnaka. The bounty hunters later encountered a group of Jedi who were battling Separatist forces on the planet. Anakin, Obi-Wan and Ahsoka came to the village the hunters were protecting where Embo and the hunters quickly surrounded them but were talked not to kill them rather team up. The bounty hunters and the Jedi fought against the pirates and Embo killed six of them but was knocked off by a tank. Embo was injured and stitched himself up. The hunters and the Jedi parted ways and Embo went on his own.

During the war, Embo and fellow hunter Sugi were present in Jabba the Hutt's palace on Tatooine when Baron Papanoida came to Jabba's palace to search for his missing daughters.

Later Embo and the other eleven bounty hunters were hired by Moralo Eval to test his war creation called "The Box" on Count Dooku's homeworld Serreno. Embo survived the challenge along with a few others as well as Cad Bane and was hired by the Count for a mission to kidnap the Supreme Chancellor.

The group of bounty hunters traveled to Naboo to carry out the mission. Using holographic technology Embo and the hunters disguised themselves as Palpatine's Senate Commandos but failed to escape with their hostage and arrested by the Jedi.

Embo did not stay arrested for long and escaped custody and was seen outside a bar tavern on Tatooine with his pet Annoba, Marrok, as Boba Fett was entering. Later Embo and his pet were in the cantina and shared a table with former Sith Acolyte Asajj Ventress.

Some time later, Embo was employed by the Hutt Grand Council as a bodyguard along with his fellow comrade Sugi, Latts Razzi and Dengar. Later the Shadow Collective arrived led by the former Sith Lord Darth Maul and his Nightbrother Savage Opress and asked the Hutts to join them or be killed. The bounty hunters along with Embo quickly sprang into action to defend their bosses. At first they managed to hold off the brothers but were soon driven back when the forces of the Death Watch led by Pre Vizsla joined the assault. Embo fought against Opress by himself but the brute brother managed to punch the hunter back. Embo was protected by the strength of his shield hat. The hunters realized they could not win and retreated leaving the Hutts to their fates while Embo sought employment elsewhere.

Later Embo was employed by a mysterious benefactor and traveled to the Banking Clan homeworld of Scipio and his target was the Clan's representative Rush Clovis. Embo also encountered Senator Amidala and managed to kill her aide. Later he attacked Clovis, Amidala and her Jedi Knight protector Anakin Skywalker in Clovis' residence and Embo gave chase to the group through the snow. Embo rode his hat chasing them while Skywalker held off his blasts fired from his bowcaster.

They were later air rescued by the Jedi's astromech droid and fled the planet. Failing to stop their escape, Marrok retrieved his hat. Embo contacted his benefactor, Emperor Palpatine to mention that Clovis had escaped as planned. The Dark Lord mentioned that he would take over from there. 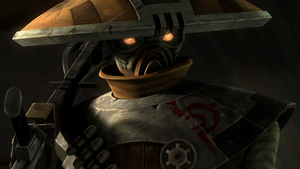 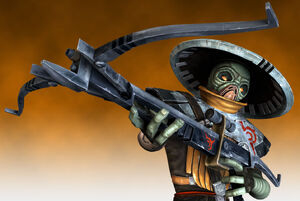 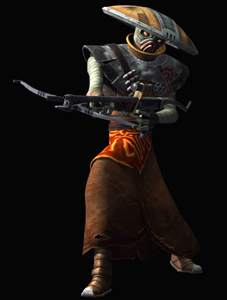 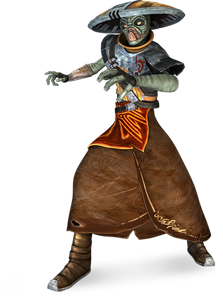 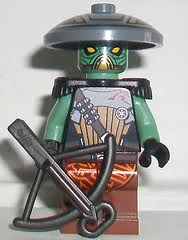