Marry his own daughter and to rule the world (formerly; abandoned).

Have Ciri succeed him (succeeded or failed).

He was the emperor of Nilfgaard, the most powerful nation to ever exist in the human world. After being fooled into believing a false prophecy regarding his descendants conquering the world, Emhyr attempts to marry his own daughter in order to be the parent of the son who was meant to rule the world. Disgusted by this, Queen Pavetta, Emhyr's wife, sent their daughter away in order to prevent her from suffering such a horrid fate. This ultimately spurred Emhyr to begin a nationwide manhunt for his daughter Ciri, beginning the events of the Witcher Saga.

He is publicly favorable to the Elder Race, unlike to the Northern Monarchs.

He was voiced by Charles Dance, who also played Tywin Lannister in HBO's Game of Thrones, Alan Jonah in Godzilla: King of the Monsters, The Master Vampire in Dracula Untold, David Carlton in Ali G Indahouse, Sardo Numspa in The Golden Child and Mr. Benedict in Last Action Hero.

In books Emhyr's father was murdered and Emhyr himself was cursed into a monster by an usurper to take over Nilfgaardian throne. Emhyr married Pavetta, princess of Cintra what resulted in birth of Ciri. The curse was lifted thanks to Geralt of Rivia. An insidious wizard Vilgefortz fooled him by a prophecy accord to to which Emhyr's daughter is supposed to rule half of the world the her son a whole world. Emhyr planned to marry own daughter, but Pavetta hid her. Outraged Emhyr threw his wife to sea after learning this. Emhyr returned to Nilfgaard and reclaimed his status of emperor by a revolution. The emperor conquered Cintra in search for Ciri. He started Second Northern War against Temeria, Redania, Keadven and Aedirn. General Menno Cohron lead his invasion forces. Despite the generals successes he died in battle of Brenna. The emperor lost the war.

In Witcher 2 Emhyr was the bigger bad. He sent Letho, Serrit and Egan to assassinate kings of North, so he could easily conquer the whole North. He also sent Shilard Fitz-Oesterlen as his diplomat to bring some nobles of the North on his side.

In Witcher 3 Emhyr is a villainous supporting character. He took over both Aedirn and Temeria during the Third Northern War. He's also in search for his daughter Ciri, who's said to be returned and enlists Geralt of Rivia's help to find her and bring her to him. By Birna Bran he tried to take over Skellige. Depending on whether King Radovid lives or dies, Nilfgaard may either lose or win the war. If Nilfgaard loses the war against the North, Emhyr will be assassinated by his subjects who'd been plotting against him. If Nilfgaard wins the war however, he'll turn his attention towards the dissent at home and wipe out the traitors with extreme prejudice.

Emhyr var Emreis was born in the late 1100s to early 1200s to Fergus var Emreis and his unnamed mother, and was in line to become the next emperor of Nilfgaard after Fergus. When he was thirteen years old, his father was usurped of his title by a unnamed aristocrat and killed during a coup. The sorcerer Braathens turned Emhyr into a humanoid hedgehog as a joke on his name and to have Fergus break, but this failed after the emperor was tortured and killed. Emhyr was then freed into the woods as dogs were set at him, but he managed to survive, and would only return to his human form at night. 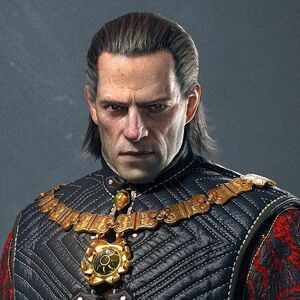