Hunt down and kill Chance Boudreaux when he becomes involved in his affairs (failed).

Emil Fouchon is the main antagonist in the 1993 film Hard Target. He is a wealthy sportsman who organizes hunting event for rich clients to hunt homeless former soldiers as a hobby.

He was portrayed by Lance Henriksen, who also played Sergeant Daniel Neff in Damien: Omen II, Chains Cooper in Stone Cold, Dr. Jarret in Man's Best Friend, John Milton in Scream 3, Thomas Magruder in the Gun video games, The Stranger in When a Stranger Calls, Brainiac in Superman: Brainiac Attacks, Lockdown in Transformers: Animated, General Shepherd in Call of Duty: Modern Warfare 2, Karl Bishop Weyland in the 2010 Aliens vs Predator video game, Grim Reaper in The Avengers: Earth's Mightiest Heroes, Lieutenant in The Legend of Korra and Baron in Tangled: The Series.

In the beginning scene of the movie, Fouchon, his mercenaries and clients hunt down a homeless veteran named Douglas Binder. Binder has a belt containing $10,000 and is told that he must reach the other side of New Orleans to win his money and his life. Binder ultimately fails to reach his destination and is shot dead by three crossbow bolts. Pik Van Cleaf, who is Fouchon's lieutenant and associate, retrieves the money belt and Fouchon asks one of his clients whether the hunt was worth his payment of $500,000. Client replies to Fouchon: "every nickel."

Fouchon's way of operating his 'hunting business' is mentioned during when he entertains his client and associates with his excellent piano skills, discussing them his philosophies of hunting men and how perfectly his operation is run: Fouchon's human preys are selected by a shady recruiter named Randal Poe who chooses homeless men with combat experiences with no family ties. The client would be provided with 'guides' and 'hounds' (mercenaries working for Fouchon) along with weapons of the client's preference. After human preys are killed in a hunt, Fouchon's groupies dispose of victims' bodies and give bodies to their bribed forensic examiner to disguise deaths, looking like accidents, thus covering an alibi. Douglas Binder's body, too, is falsely examined and is ruled as accident. As for Fouchon's clients, they must agree to finish off their human preys. Backing off or breaking off contract is not an option.

Natasha Binder, daughter of Douglas, comes to New Orleans in search for her missing father. She hires Chance Boudreaux, a homeless laborer and former Marine Force Recon after he saves Natasha from being mugged. She discovers her father had been distributing fliers to Randal, arrives at Randal's office to question him but she and Chance were eavesdropped by Pik van Cleef. Sensing danger from Van Cleef, Chance leaves with Natasha without further ado much to the latter's chagrin. That night, Fouchon and Van Cleef storm into Randal's house, beat him and torture him savagely for sending them a man with a family who are now asking lots of questions.

Back in his manor, Fouchon realizes who Chance is, his background, and deems that nothing good is going to come out involving with him. Van Cleef says that he would 'visit' Chance, but Fouchon tells him to hire some thugs to have a 'chat' with Chance instead.

Eventually, Chance and Natasha are told by NOPD personnel that Douglas died. But Chance, upon discovering Douglas had been missing one of his dog tag (military always issues them in pairs), goes to search the ruin where Doug's charred corpse is discovered. After gotten roughed up goons sent by Van Cleef in an attempt to scare him and Natasha out of town, Chance secures the missing dog tag, which has a punctured hole, made by arrows shot from a crossbow bolt which Douglas was killed by. Returning to Natasha and NOPD detective May Mitchell, he informs both women what he discovered, and he offers the dog tag he found to support his claim. Furious, Mitchell storms into autopsy room where the forensic examiner, who was bribed by Fouchon, was working on and demands that Binder's autopsy be redone. With the investigation getting closer to them, Fouchon and Van Cleef decide to relocate their hunting business and begin eliminating potential problems: The medical examiner who had been hiding evidence of the hunt is murdered.

After eliminating one liability, Chance's homeless friend Elijah Roper is the next to participate in Fouchon's hunt. But during the hunt, Fouchon's client reneges on his agreement of the hunt, So Fouchon has his client killed and finishes the hunt himself by killing Roper. Roper's body was found by Chance, Natasha and Mitchell the next day, and the three decide to arrest Randal Poe. Randal, who was also on Fouchon's elimination list and after being roughed up by Chance who declares war on Van Cleef the day before, attempts to flee the town only to be intercepted by Van Cleef and got killed as well.

Chance, Natasha, and Mitchell arrive moments later to see Randal in his car had his brain blown off. Immediately thereafter, the three are ambushed by several of Fouchon's mercs, including Van Cleef. During the shootout Fouchon's men manage to kill Mitchell, but Chance puts up a ferocious fight, killing many of Fouchon's agents and escapes with Natasha. Fouchon has a change of heart: instead of relocating elsewhere, this would be his one last hunt.

Fouchon and Van Cleef assemble all their remaining mercenaries and their five client hunters to continue the chase. Fouchon warns his clients not to underestimate Chance and addresses the former marine as "a world class trophy". They track down the pair, but Chance leaves traps behind, and more hunters fall victims to them. As casualties begin to mount, Fouchon begins to lose his composure. Chance, with Natasha, enlists the help of his uncle Douvee living deep in the bayou. The three lure the hunting party to a warehouse of old damaged Mardi Gras storage called Mardi Gras Graveyard. There, the three wage a big shootout where Fouchon's men and clients are gunned down. Van Cleef is killed in a gun duel against Chance and only Fouchon is left.

Having table turned on Fouchon, Chance prods and taunts him until Fouchon, who holds an advantage when he takes Natasha hostage and wounds Douvee with an arrow. But no matter, as Chance then charges at Fouchon, attacking him with barrages of blows before dropping a grenade down his trousers, effectively delivering the evil man death sentence with the quote "The hunting season is over". Fouchon tries desperately to dismantle the grenade but fails, and he is killed instantly when it explodes. 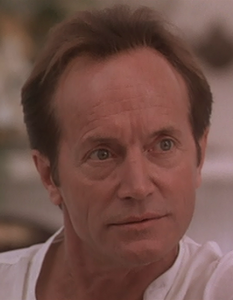 Emil Fouchon, the hunter of humans. 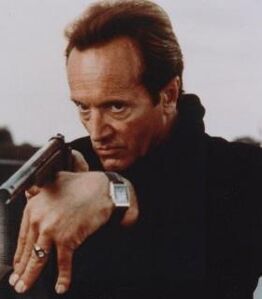 The wealthy but sadistic Mr. Emil Fouchon always goes for the kill.