Villains Wiki
Register
Don't have an account?
Sign In
Advertisement
in: Mature, The Godfather Villains, Crime Lord,
and 34 more
English

Head of the Barzini Family

Became the dominant crime family in the United States.

Emilio Barzini was the head of the Barzini crime family. He serves as the main antagonist of the The Godfather and the video game of the same name.

He was portrayed by the late Richard Conte.

In the early 1930s, Barzini became one of the chief lieutenants in Giuseppe Mariposa's organizations, along with his brother Ettore. He began to grow unhappy with Mariposa after Mariposa murdered his friend "Tims" merely on suspicion of treachery, and after Barzini's attempt to assasinate Vito Corleone at a parade turned into a massacre, he began to see the tide turning and betrayed his master to Don Corleone.

After Mariposa's death, Barzini took over the remnants of his organizations and presided as head of one of New York's Five Families. He was generally reckoned as the second most powerful and richest Mafia chieftain in both New York and the nation, behind only Vito Corleone. He rose to power shortly after Don Corleone and was a physical presence in the 1930s. He had interests in markets such as narcotics, gambling and prostitution, and was also clever enough to be interested in Las Vegas and Cuba.

In the 1940s, he was the man behind Virgil Sollozzo, Philip Tattaglia and the other Mafia families' quest to bring down the Corleone family. Shortly after Vito's death he was assassinated at the order of Michael Corleone, the new Don of the Corleone family.

In the video game

In The Godfather: The Game, Don Emilio Barzini was the richest guy in New York and orders the murder of Johnny Trapani, but spares his wife and son out of pity. The son, Aldo, is promised by Don Corleone that one day, he will be able to take his revenge.

Years later, during the Five Families War, Barzini is initially confident of success, but begins to lose his grip following Sonny Corleone and Aldo Trapani's raid on the West Port Warehouse, which draws dangerously close to revealing the Barzinis role as the manipulators behind the violence. He is referred to by the Tattaglia Underboss as "The Wolf" and a "Puppet Master", implying the Tattaglias are just footsoldiers for the Barzinis.

During the baptism, Aldo is accompanied by Al Neri to the City Hall where instead of being gunned down on the steps, Barzini attempts to evade capture by Aldo. He is eventually cornered, and instead of putting up a fight, he admits defeat and taunts that the Barzinis are not yet terminated. The player then is left with the choice of how to kill him or letting the Corleones deal with him, finally avenging Aldo's father 19 years after his death.

Emilio at a meeting of The Dons. 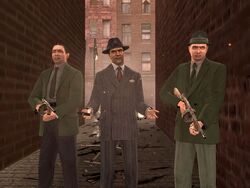 Barzini with his butler. 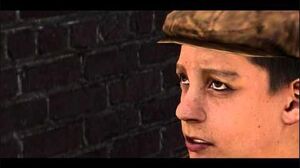