Kill Jesse for presumably ratting him out to the DEA (failed).

Emilio Koyama is a minor antagonist in Season 1 of Breaking Bad, appearing as the secondary antagonist of the series' pilot episode. He was Jesse Pinkman's former partner in the meth business and the cousin of Domingo Gallardo "Krazy 8" Molina.

He was portrayed by John Koyama-who also shares the same surname with the character.

According to Jesse, they met when they were in elementary school. Jesse mentions that Saul Goodman provided Emilio legal representation on at least two occasions, getting him acquitted both times despite much evidence against him.

Emilio is arrested during a raid on a house in which the DEA is looking for meth supplier who goes by the street name "Captain Cook". Emilio makes bail and suspects that his partner, Jesse Pinkman, ratted him out to the police (which turned out to have been Krazy-8 as a DEA informant) and forces Jesse to lead him and Krazy 8, in Emilio's 1980 Buick Regal, to his new partner, Walter White. Emilio recognizes Walt from his arrest and suggests killing both Walt and Jesse. Walt convinces them to spare their lives if he teaches them his meth formula.

While the three are in The RV in the desert, Walt deliberately causes a chemical explosion and flees, trapping Emilio and Krazy 8 inside the RV with deadly phosphine gas, killing Emilio immediately.

Walt and Jesse subsequently dispose of Emilio's corpse by dissolving it in hydrofluoric acid in Jesse's bathtub. However, the corrosive acid eats through the bathtub and the floor, splattering Emilio's bloody, liquified remains on the floor. Walt and Jesse later clean up the mess. 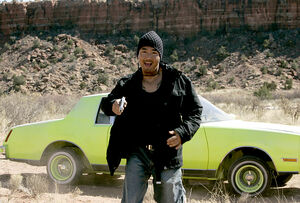 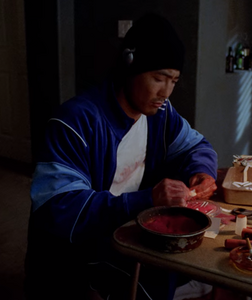 Emilio in his meth lab, right before his apprehension by the DEA. 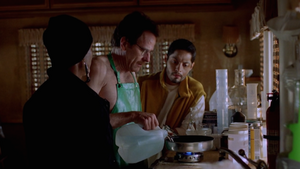 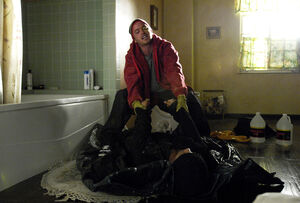 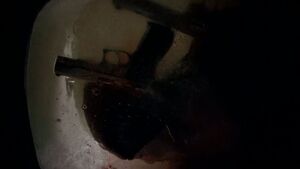 Emilio's body being dissolved by hydrofluoric acid, shortly before the bathtub falls to the floor below.