Use stolen nuclear warheads to extort money from NATO (failed).

Emilio Largo is the main antagonist in the 1961 James Bond novel Thunderball and its 1965 film adaptation. He is the second-in-command of SPECTRE and answers directly to its leader Ernst Stavro Blofeld, who is responsible for the implementation of the ambitious NATO project with the aim of getting his hands on two nuclear missiles for extortion purposes.

He was portrayed by the late Adolfo Celi, whose voice was dubbed over by the late Robert Rietti.

Described in the novel as a ruthless Neapolitan black marketeer and fence who moved to riskier and more profitable ventures on the international crime scene, Largo eventually became the second-in-command of the terrorist organization SPECTRE. In the film, Largo is "No. 2" and head of extortion operations. In the novel, Largo is "No. 1"; however, the numbers are rotated every month as a security precaution, although Largo is the successor to Ernst Stavro Blofeld and the Supreme Commander of "Plan Omega".

Largo's two main headquarters are located in the Bahamas. The first was his estate, called Palmyra, which housed a giant swimming pool filled with sharks. Bond would later be thrown into this pool, but of course escaped. The second was Largo's private yacht, the Disco Volante. The yacht was a hydrofoil craft purchased with SPECTRE funds for £200,000. The craft plays a pivotal role in the seizure and transportation of the two nuclear weapons.

To Largo, failure was a crime punishable by death. When Quist, one of Largo's henchmen, fails to kill Bond, Largo has him thrown into his pool of sharks. Largo also has little consideration even for those closest to him, going as far as to torture his own mistress, Domino, when he finds out she is betraying him.

But one of Largo's henchmen helps Domino get free and Domino gets to do what she wanted Bond to do: kill Largo. When Largo gets the upper hand by nearly shooting Bond, Domino shoots him in the back with a spear gun. Largo collapses dead onto the controls and jams them. Bond, Domino and Ladislav Kutze, a nuclear physicist who helped Domino escape, all evacuate the Disco Volante as it runs aground and explodes.

In the unofficial film Never Say Never Again, which is actually a remake of Thunderball, Largo is named Maximillian instead of Emilio and is killed by Domino while preparing the bomb in the water instead of being killed on the boat. Maximillian is portrayed by Klaus Maria Brandauer, who also voiced Claudandus in the original version of Felidae.

Vigorous, elegant, adventurous, very intelligent, and quite physically imposing, failure is punishable by death according to him. He is clearly shown to be a psychopath, as he does not hesitate to kill any of his minions who fail in their missions or who are not loyal to him, just like Blofeld. He is also the lover of a young French woman by the name of Domino Derval, but he does not seem to feel the slightest love for her as shown by his willingness to submit her to slow and painful torture when he suspects that she's helping Bond. In addition, she is the sister of NATO pilot François Derval, and Largo sees no harm in killing the latter and hiding it from her. 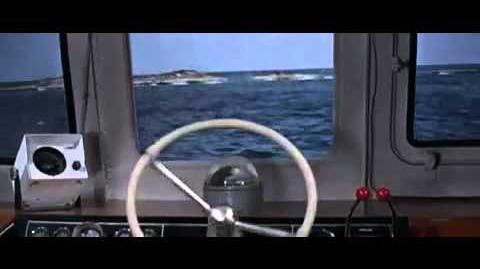