Emma Frost is a fictional character who is a powerful telepathic mutant with the ability to have her body encased in diamond-like shell, and she is an antagonist (sometimes an anti-heroine) the X-Men series and within the Marvel comics. She is a long-time member of the Hellfire Club as the White Queen.

Emma Frost was born into a wealthy old Boston mercantile family that arrived from England in the 1600s. The second of three daughters, Emma also had an older brother named Christian who had turned to substance abuse as an escape from the drudgery of his life. Unknown to their family or themselves, the three Frost sisters were mutants whose telepathic abilities matured upon reaching puberty.

When it came time for their father to choose a worthy heir to the family fortune, Christian was automatically dismissed due to his drug problem. Whilst the older sister Adrienne seemed the most obvious choice, the father chose Emma. Surprisingly, she refused, choosing to make her own way through life.

Emma ultimately inherited a good deal of wealth, but most of her large fortune resulted from her professional success. She ascended rapidly to the upper echelon of the business world on the strength of her intelligence, drive, and personal charm, as well as the secret use of her mental powers. Also, at some point, the Dark Beast met Emma, and helped her rise to wealth and power.

Eventually, Emma became majority stockholder of a multi billion dollar conglomerate principally involved in electronics and transportation - both the building of ships and aircraft, and their use for freight and passenger conveyance. Despite her relative youth, she was named chairwoman of the board and chief executive officer of the rechristened Frost International. She also became headmistress and chairwoman of the board of trustees of the Massachusetts Academy - a college preparatory school for students in grades seven through twelve located in the Berkshire Mountains in Snow Valley, Massachusetts.

Emma's success caught the attention of the Hellfire Club, an elite social organization consisting of the world's wealthiest and most powerful figures. When she learned that the club was hiring dancers, she promptly auditioned and used her telepathic talents to enhance her performance in their eyes. Unlike the other females in the Club, Emma was never uncomfortable with the strict dress code that required female members to wear lingerie at all times. She believed her revealing wardrobe to be one of many weapons in her arsenal, one that gave her an instant advantage over men.

Frost quickly became an ally of Sebastian Shaw, a member of the club's Council of the Chosen who were secretly conspiring to achieve world domination through economic and political means. At the time, the leaders of the club and council - its foremost Lords Cardinal, whose titles corresponded to the names of chess pieces - were White King Edward Buckman and White Queen Paris Seville.

Buckman threw the council's support behind Project: Armageddon, scientist Steven Lang's program to construct mutant-hunting Sentinel robots. Aware of Shaw's genetic disposition, Buckman told him the initiative's intent was to capture mutants as a means of helping the council attain power. Using her psionic powers, Emma learned that the project's actual purpose was the annihilation of all genetic deviants. After Shaw's lover, Lourdes Chantel, was murdered by one of the Sentinels, Shaw and Frost staged a coup that saw them seize control of the Council of the Chosen, which they renamed the Inner Circle. Shaw took the title of Black King, and Frost became the new White Queen.

Under Shaw and Frost's leadership, mutants dominated the Inner Circle. To strengthen the Club's power base, Emma recruited genetically gifted youngsters and helped them hone their abilities at her school. Most of these students were members of the Hellions, Emma's first mutant super-team. She initially encountered the outlaw band of heroic mutant adventurers known as the X-Men when she unsuccessfully attempted to recruit young Kitty Pryde, the phase-shifting mutant then known as Shadowcat. Subsequently, Emma crossed paths with the X-Men - and their protégés, the New Mutants - on a number of occasions, often as their adversary. Later, the X-Men joined with the Hellions to protect the White Queen from the time-traveling terrorist named Trevor Fitzroy. However, the madman's brutal assault plunged Emma into a deep coma and brought about the Hellions' untimely demise.

Whilst Emma's consciousness still active on the material plane, her body was kept in the med-lab at the X-Men's mansion. Seeking to ensure her students' welfare and the school's future, Emma had willed responsibility for the Massachusetts Academy to Professor Charles Xavier, the X-Men's telepathic founder. During her psychic incapacitation, the school was added to the rapidly expanding Xavier Institute. While Emma’s corporeal form was in stasis, a short-circuit in the mansion inadvertently caused her psyche to possess the X-Man named Iceman, whilst his mind was transferred into her body.

Coerced by Professor X, Emma eventually reclaimed her own form. After making a full recovery, she resumed her role as headmistress of the academy. Ably assisted by Sean Cassidy, the sonically empowered former X-Man known as Banshee, she set out to train a new crop of young mutants, this being Generation X. When the sinking stock market dealt Frost International a major blow, Emma swallowed her pride and sought the help of her older sister, Adrienne, who agreed to support her sibling's flagging financial interests only if she were named co-headmaster. But Adrienne's power play did not wind down when Emma acceded to her request, nor did it end when she supplanted her sister as the Hellfire Club's White Queen. Only after Adrienne telepathically incited a riot at the school did Emma find a way to upset her ascension through the way of the gun. Emma shot and killed her sister, thereby laying claim to Adrienne's inheritance.

Following the dissolution of Generation X and the closure of the Massachusetts Academy, Emma moved to the island nation of Genosha where she began teaching mutant children again. Soon after, a Sentinel attack wiped out Genosha's entire mutant population. Emma was found by the X-Men alive in the rubble, having undergone a secondary mutagenic change that allowed her to survive the onslaught. Following this incident, Emma came to teach at the Xavier Institute, and soon took on the responsibility of personally mentoring the telepathic quintuplets known as the Stepford Cuckoos.

Emma later counseled her teammate Cyclops following his possession by the eternal mutant warlord Apocalypse. This soon turned into a telepathic affair between the two which was short-lived after Summers' wife, Jean Grey, discovered what was happening.

During the riot at the Xavier Institute, Sophie of the telepathic sisters the Stepford Cuckoos died. The remaining sisters blamed Emma for this and told Jean Grey-Summers of Emma's affair with her husband. When Emma was confronted by Jean, she was forced to relive various moments of her past.

Following this confrontation, Emma was shot with a diamond bullet whilst in her diamond form, shattering it. Though she was believed to be dead at first, Emma's consciousness was trapped in her shattered remains. Phoenix discovered this and telekinetically fused Emma's body back together. Upon being reassembled, Emma identified Esme of the Cuckoos as the culprit behind her assassination. However, Esme was working with the X-Man Xorn, who believed himself to be Magneto at the time, and it was he who shot Emma as she had learned of his dual identity.

Following the death of Jean Grey, Emma has assumed the position of co-headmaster of the Xavier Institute alongside Cyclops.

When a band of Shi'ar reconstituted the Phoenix Force in order to destroy it, they ended up shattering it and driving it insane. It went to earth and forcefully resurrected Jean Grey, believing it needed Scott Summers when what it needed was the energy from his optic blasts. Emma attempted to shield Scott with her mind, but was stopped by Quentin Quire, who sought to use the Phoenix Force to resurrect Sophie of the Cuckoos. Emma offered herself as a host for the Phoenix Force so it could be contained but was quickly overpowered and her body was completely taken over by the Force. After temporarily resurrecting Sophie, who rejected Quentin, the Phoenix proceeded to burn the planet. Jean Grey separated Emma and reemerged with the Force, only to fall into insanity. Emma used her powers to contact every X-Man in the world and their love for Jean restored the Phoenix' sanity, who became the White Phoenix and returned to the White Hot Room to find her missing pieces.

Emma Frost appears in X-Men: The Animated Series in its "Dark Phoenix Saga". She is the White Queen of the Inner Circle and a powerful telepath. The White Queen was able to shut out Xavier with the aid of Cerebro, and keep Professor Xavier from locating Jean Grey/Phoenix and tricked her into joining them as the Black Queen. Emma seemed to show some jealously towards Shaw's affections for Phoenix and told the group her worries of the Phoenix discovering the truth and turn against the Inner Circle which eventually she did by becoming the Dark Phoenix.

She was voiced by Tracey Moore.

Unintentionally levitated some utensils while facing a nightmare. Synch then used this ability to telekinetically levitate objects. After further clarifications, it was stated that this phenomenon is one of Frost's powers that potentially lies within her mutation. 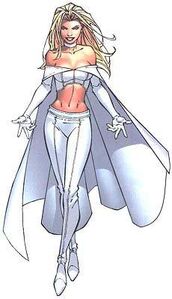 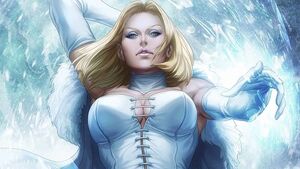 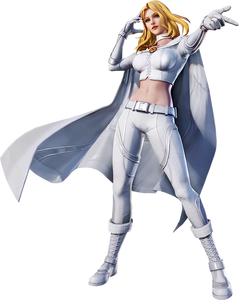 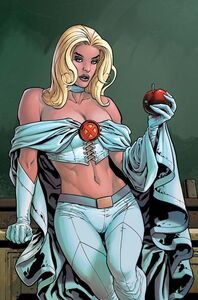 Emma Frost is dubbed as a woman of perfection from the fans.