Keep everything "happy", even if it means killing them

Well-Intentioned Extremists
The Emojibots are the main antagonists of the Doctor Who episode, "Smile" - although not officially named on-screen they would earn their nickname from fans as well as scripts for the episode based on their design and the fact the communicate via emoji "language".

The Emojibots were the hosts to the microscopic nanites known as the Vardy, together the artificial intelligences were tasked with keeping the colony happy. However, a fatal flaw would be put in their logic when they were told to keep the colonists happy at all times.

Thus when a woman died and colonists mourned said death the Emojibots saw grief as an "enemy" of happiness and went on a murderous rampage - killing all colonists and using their skeletons as fertilizer.

Emojibots are advanced artificial intelligences that inhabit small vaguely humanoid shells - the Doctor noted that the shells were not technically robots but interfaces by which the actual AI could interact with the world.

Despite their small size and apparently harmless design they were numerous and had full control over a large city, they also had access to devices that could read a person's mood and monitor said mood, if a person's mood became anything other than "happy" the robots would dramatically alter their programme and become murderous. 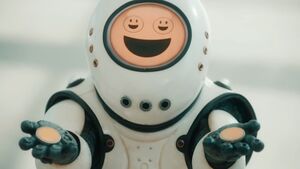 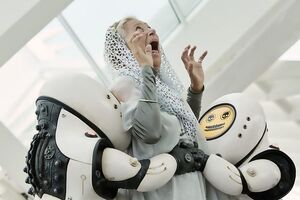 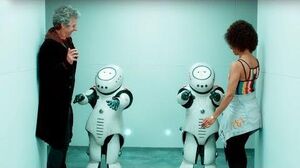