Convince Ivan Whisky/Cyborg 001 to join his cause.

Evolve humanity into Blessed via nanomachines.
Wipe the memories of all humans and reprogram them to worship him as a god.

Emperor is the mysterious leader of the Blessed and the primary antagonist of the 12-part Netflix series, Cyborg 009: Call of Justice. He is an immortal Blessed with the ability to copy the powers of other Blessed, resulting in him being one of the most powerful Blessed alive.

The Emperor's goal is to evolve humanity into Blessed via nano-machines, as he believes humanity to be too destructive in its current form. Despite the fact that this procedure would only spare about 5% of the human population, with the rest dying, the Emperor believes it to be for the greater good.

Taking an interest in the psychic powers of Cyborg 001, the Emperor contacted Pyotr Maximoff via telepathy and instructed him to bring him the infant cyborg. After Terminal brought him Ivan, Emperor introduced himself and explained his plan to him. Intrigued, Ivan agreed to accompany him to learn more.

After Cyborg 009 destroyed The Professor, Emperor attempted to take control of the space station away from Cyborg 004, forcing the cyborg to stay aboard the station to keep control as it flew towards the sun.

Though the space station and the nanomachines were destroyed, Emperor had a backup plan: combine his powers with the powers of Cyborg 001 and use them to wipe the memories and knowledge of humanity so he could reprogram them more to his liking. Hearing of his true intentions, Ivan attempted to stop him, engaging the Emperor in an intense psychic battle. When the Emperor proved too strong, 001 summoned 009 there to assist.

Catalina soon joined the fight as well, but the Emperor erased all memories of her bond with Cyborg 009 in an attempt to make her loyal again. However, Catalina still refused to go against 009. The Emperor then wiped all of her memories, saving only her basic instincts, and stated he would do this to every human on the planet so he could condition them to worship him as a god. Angered, 009 charged at the Emperor, but the leader of the Blessed managed to block all of his attacks. Emperor attempted to wipe 009's memories, but the cyborg managed to avoid his moves thanks to his Accelerator. Even so, the Emperor still had the upper hand in the fight, as the speed of his thought was much faster than 009's.

However, after all the other 00 cyborgs placed their hope in him, 009 managed to increase his Acceleration power so he could move even faster than the Emperor. In addition to this, Catalina had managed to hold onto her memories through sheer willpower and linked 009 and Emperor's minds, causing the Emperor to see the void 009 experienced whenever he entered Acceleration mode. Angered by what Catalina had done, the Emperor used his telekinesis to grab Catalina and shocked her with a lightning bolt, killing her.

009 then engages the Emperor in battle once again. The Emperor attempts to use his and 001's powers to create a shockwave to destroy the 00 Cyborgs, but is interrupted by 009, who uses his Acceleration Mode to transport both him and the Emperor into a white void. Frightened at the thought of being alone forever, Emperor asks 009 how he can endure being alone. 009 responds by stating that it's his mission in life after punching the Emperor in the face, breaking his mask and killing him. 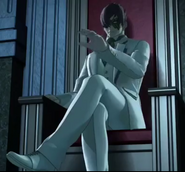 Emperor sitting on his throne

Retrieved from "https://villains.fandom.com/wiki/Emperor_(Cyborg_009)?oldid=3536051"
Community content is available under CC-BY-SA unless otherwise noted.