Leader of the Fist Fighters

Chasing after girls.
Destroying towns with a loud music.
Playing rave parties.
Propose himself up for being cool.
Provoking & fighting with Lord Hater.

Take over the universe and usurp Lord Hater as the Greatest in the Galaxy (failed).

Emperor Awesome, also simply known as Awesome, is a recurring antagonist in the Disney animated series Wander Over Yonder.

He was voiced by Sam Riegel, who also plays Barley, Branson, and Blair, all from Amphibia.

Emperor Awesome is an anthropomorphic alien shark who first appeared in "The Picnic". He and Lord Hater pitted a fight against each other in order to claim a wish from a celestial being that appeared only once within thousands of years.

In "The Fancy Party", Awesome shows up for Queen Entozoa's party along with a few other villains, including Lord Hater and Commander Peepers. He tries to impress Sylvia, but she bluntly lets him down. His leitmotif is briefly parodied as "Not so awesome", as a result of him temporarily dealing with rejection for that episode.

He appears again in "The Party Animal" as the primary antagonist of that episode. It is shown that he conquers and destroys planets through excessive rave parties. He is defeated after competing in a dance-off against Wander. So he and his henchmen leave because the planet is "too lame to party on", swearing revenge against Wander and Sylvia as they do so.

Emperor Awesome's next major role would be in "The Cool Guy", where Lord Hater ditches Peepers and their plan to invade another planet in favor of spending time with Awesome to learn how to be a cool guy who knows how to throw cool parties. However, Awesome decides to continuously harass Peepers, who also gets treated as a joke by the citizens of the planet he is trying to conquer. This triggers Hater into beating Awesome up and reuniting with Peepers.

In "The Battle Royale", Emperor Awesome and his Fist Fighter army showed up, along with a majority of the show's villains to claim a ring that they thought would help them conquer the galaxy, which is actually a hoax made up by Wander. Awesome and his army fight Lord Hater, but he loses the fight when Hater storms through him and his army to pursue Wander. He also bluntly tells Something the So-and-So to put down the ring and come back when he is better prepared, when he failed to make a convincing speech for his victory.

He shows up again in "The Rival", where he tried to propose his alliance to Lord Dominator. He attempts to impress Dominator by pretending that he has a powerful weapon for her. It turns out that the "weapon" Awesome was talking about is actually his pushups. Dominator pretends to be interested in him, only to encase him and then bluntly lets him down, while proclaiming that not even Hater would lie about his gifts. After his ship gets destroyed at the end of the episode, Emperor Awesome gets captured by Dominator, as shown in "My Fair Hatey".

He shows up once more in "The Bad Neighbors", where he takes refuge in a neighborhood planet along with Lord Hater and Commander Peepers. Since the episode makes fun of sitcoms, he is Hater's annoying next door neighbor for the whole episode. He is also shown to be rather frightened by Lord Dominator as a result of his recent encounter with her in "The Rival", as shown when he stutters in fear trying to mention her full name. Awesome and Hater constantly try to beat each other in a series of hijinks on whose garden is better. Lord Hater defeats Awesome in the end with a much more successful barbeque party for Dominator's escaped prisoners. 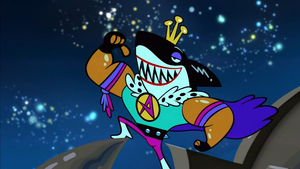 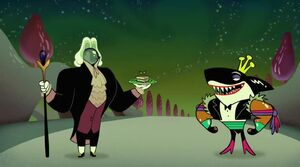 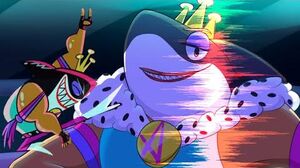