Dark lord of the Sith

Having power.
Getting what he wants.

Get Chris Skywalker to join The Dark side or kill him.

Destroy the Jedi and rule the galaxy (all failed).

Emperor Carter is the main antagonist in the Family Guy Star Wars parody specials. He was played by Carter Pewterschmidt. He was the Dark Lord of the Sith whose goal was to rule the galaxy.

His apprentice was Darth Stewie, and he wanted to get Luke Skywalker (aka Chris) to join the Dark Side. When Luke refused, Carter tried to kill him (ironically, he did so right after Luke sarcastically told him "You and what lightning hands?"). However, Carter was betrayed by Stewie, when he helped Luke because he had good manners, and hurled him down the reactor of the Death Star II which was an homage to George Lucas' Emperor Palpatine. While falling out he hit the Millennium Falcon's window which startled Lando (Mort Goldman) and Nien (Rallo Tubbs). 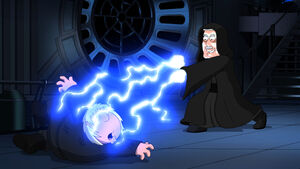