Ability to transform into mists and fogs

Create the Man-Made Beherit and enter his Shiva form (succeeded).

Kill Griffith and the Band of the Hawk.
Kill Guts and his friends.
Conquer the world (ultimate objective).

Emperor Ganishka (in Japanese: ガニシュカ) was the main antagonist of the Falcon of the Millennium Empire Arc of the Berserk series. He was the tyrannical head of the Kushan nation. He was one of the few Apostles to oppose the God Hand. Behind his horrid monstrosity and bloodlust, lies a deeply disturbed and even troubled individual whose life had been a terrible struggle for survival, which was wrought with distrust, treachery, bloodshed, manipulation, violence, and purge. During his dark life, Ganishka had never known peace, love, or trust, and had secretly yearned for the warmth of the light - which he finally received in death.

The eldest son of the Emperor of the Kushan empire who did not love him, Ganishka's mother also always favored his younger brother over him. When Ganishka was six years old, his mother made him drink a cup of poisoned wine in order to ensure the throne would go to his younger brother. Surviving this near death experience, an embittered Ganishka sought revenge by sneaking into his little brother's room at night and stabbing him. Upon discovering her favorite son's death, Ganishka's mother committed suicide by jumping out the window.

Far from being safe, treacherous aristocrats and elites attempted to manipulate young Ganishka to further their agendas, but they were all assassinated by him instead. Ganishka's father, the king, who viewed his own surviving son with paranoia and suspicion, later lost his life on a trip, when he fell off his mount after being hit by a toxic dart (engineered by Ganishka, who immediately proceeded to kill the assassin to keep the incident secret).

The throne then passed on to Ganishka. But even though he became the king, he still did not feel safe: other powerful and bellicose neighbors tried their shots on his nation. Ganishka, who took the decision that only terror greater than he experienced could ensure his survival, fought long wars of brutal conquest. Around this time, Ganishka took a wife from one of the neighboring nations per tradition and had a son with her, but Ganishka found no happiness in this relationship: in fact, he feared it - the very thought of having wife and child unnerved him. In addition, Ganishka's duties at war prevented him of his duties as a father and husband, resulting in him becoming estranged from his wife and son. At some point, his ambition to rule supreme evolves into an obsession with the global hegemony: no amount of bloodshed and conquests could ever soothe his fear for life born of extreme feeling of insecurity and only by conquering the world, he thought he could then truly feel safe.

Years of conquests later, when Ganishka was at a feast for one of his victorious campaigns, his own son (who resembled young Ganishka), tried to kill him out of paranoia (just as Ganishka killed his own father). Poisoned, attacked by soldiers, and moments from death, Ganishka's bloodied hand grasped the behelit, which was revealed to have been given to him by Dhaiva. Using the behelit to make a bargain to become a demonic apostle, his son was sacrificed as part of this deal with the devil and Ganishka was reborn as an apostle.

As an apostle, Ganishka grew to be an even more terrible tyrant. Under his reign: ethnic cleansing was common even in his own lands, conquered populations were enslaved to be used as cannon fodder for his armies, and civilians were tortured, killed, and then displayed solely to satisfy the Emperor's amusement. This wanton display of savagery drew disgust even from Silat, a leader of Bakiraka Clan, of mercenary assassins and himself a hardened killer.

One of the most notable atrocities consisted of Ganishka sewing together the still-living bodies of other apostles into a vast cauldron known as the Man-Made Beherit.

Ganishka made use of this device by having thousands of female prisoners raped by his soldiers, then dunking the pregnant prisoners into his Man-Made Beherit to turn their unborn babies into "Daka", half-demon monstrosities that burst out of their mother's abdomen at birth. Fed on human flesh, including their own mother, Daka were extensively used in Ganishka's reign. With Dakas, Ganishka also created Demon Beasts; animals infused with evil spirits and turned into large abominable monsters. With these monsters, in addition to Ganishka's apostle ability to create mists, the Emperor of Terror turned the capital of Windham into a 'demon city' where monsters roamed rampant under creepy fogs.

Aiming to overthrow Godhand and reign supreme over the world himself, Ganishka rebelled against the other apostles.

Shiva is the name given to Ganishka by his followers during his transformation. Ganishka resolved to become a being that transcends Apostle' when it became clear that no matter how many Demon Beasts and human troops he sends against Griffith, the Hawk is simply too powerful and untouchable. He used the same "rig" of apostles that he used to create his demon soldiers. When he lowered himself, he disappeared in the liquid. A slow creeping fog killed everyone in the area, except for Dhaiva because he erected a personal barrier to protect himself. This was noted to be a "Man-Made Behelit."

In this state, Ganishka looks like a two-legged tower, from far away. His head was a mound of multiple heads that could all breathe fire. There were many whip-like arms. Ganishka could also create apostle-spawns of himself. All uniformly looking like big heads with sharper teeth and tentacles where the neck should be in order to move around. Also, probably because of the power that he attained by his own way, he lost all sense of rational thinking and self (much like Guts Berserker rage). The emperor seemed to be ignorant of the effect of transformation on his body. He was unable to register the fact that he was now a huge entity and thought of everyone around him as insects. It can be observed that his mental state deteriorated as he stayed in this form. At first, he was able to recognition Dhaiva. But then he became disorientated and started to get lost in his own power. He lost his sense of perception. He crushed his Army under his footsteps and considered the gore thus produced as "Crimson Flowers". He was capable of emitting fire from his many mouths. Dhaiva notices that his ability to scorch the earth by mere whim was similar to that of Shiva (the God of Destruction as per Hindu Mythology).

Ganishka was confirmed as being dead, apparently after receiving a blow from Skull Knight's Sword of Resonance that was deflected by Femto by warping the space around him. This triggered the "World Transformation", which caused his corpse to become a giant tree (described to be much like holy trees from many religious stories) from the base of which sprouted the mysterious new castle "Falconia," implied to be Griffith's new kingdom.

Ganishka is said to have become the light which he sought desperately all in his life. The light engulfed the entire world, merging reality and fantasy, the real world and Astral world. This causes the appearance of Dragons, Trolls, Goblins, Hydra, Fairies, Unicorns, and other such mystical creatures on Earth. Ganishka reveled being an 'infinite taker and desecrator' in life. In an enormous twist of irony, corpses of monster avatars spawned from him creating blood lakes by crushing his own army under his footsteps, have now become magical barriers to ward off any hostile fantasy monsters away from humanity who took refuge in Falconia ruled by Griffith. In the end, Ganishka from beginning to end was a sacrificial pawn who was fated by the law of causality to fall by Griffith who uses Ganishka as the strong foundation necessary to build his own kingdom.

Ganishka's massive body, now being called 'the world tree' by people, continues to expand, continuously undermining the balance between reality and fantasy, causing even more chaos upon the world. 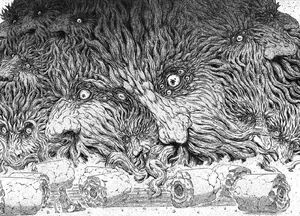 The faces on Shiva Ganishka's "head". 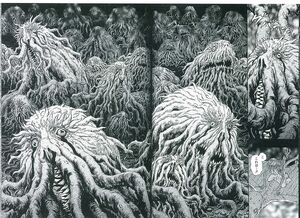 Those killed by Shiva Ganishka turn into these monsters.